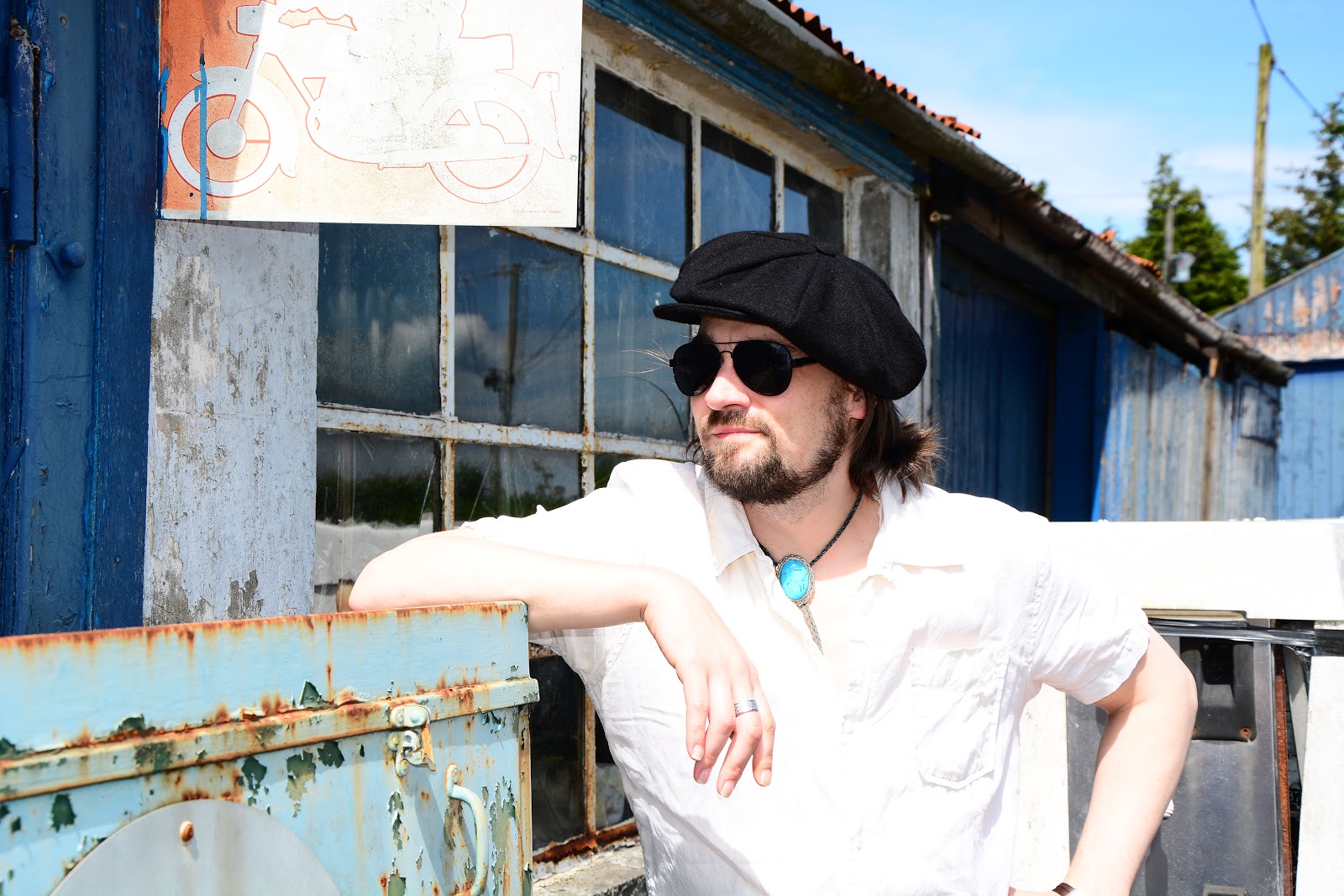 Lamitschka:  What is your latest
CD and how’s it doing?

Answer:  My
latest release is an EP called ‘Dark Horses’ and it’s the first
solo release in my career to date. It’s been received well by fans
of The Hardchargers and newcomers alike, with the video for the title
track getting more views on social media than previous releases and
it’s starting to gain a little bit of traction with several radio
plays following last week’s mail-out to stations.

Lamitschka:  Please tell us
about the songs on your album (influences, etc).

Answer:  I
decided to record two new originals: the title track ‘Dark Horses’
and another called ‘Red Lion Yard’ alongside two covers; Bukka
White’s ‘Shake ‘Em On Down’ and Lightnin’ Hopkins ‘Lonesome
Dog Blues’. Both Bukka White and Lightnin Hopkins have been
important early inspirations on me to play and write music and I felt
it was a good time to demonstrate it by covering a song each from
them. ‘Red Lion Yard’ was written one day in the cab of my van
during a period of homelessness and is loosely based around a tune by
Willie Brown. With ‘Dark Horses’ itself, musically,a
couple of ideassort of ‘fell out’ while
playing around on my 12-string acoustic guitar. At first, I thought
they would be separate song ideas and then I realised that the parts
sounded really good together so I began working on a song structure
and arrangement. The lyrics for ‘Dark Horses’ at first didn’t
come to me at all but one night they just came to me and I wrote them
down as quickly as the ideas arrived, it took less than an hour to
write the lyrics once the dam opened.

Answer:  People
who know me and the music I’ve made with The Hardchargers have been
most taken by my voice on that track which is a very different style
to how I’ve sang before and another common theme is what people are
describing as a ‘haunting’ quality which I think is a combination
of my voice, the lyrics and guitar playing on the track but also
definitely the additional instruments like the dulcimer, cello and
bells that the producer and engineer Cormac O’Kane put on there.
That happened because Cormac and I took a little break at one point
and I was describing another new tune to him that I’ve been working
on, which is a kind of tribute to Ennio Morricone’s brilliant work
on the Italian western movies of the 60’s and he suggested we try a
little bit of that sound on ‘Dark Horses’ as well, especially as
the guitar intro already had that kind of fingerpicked Spanish sound.

Lamitschka:  How much creative
control do you have over your music?

Answer:With
recording, it varies a little from project to project or in the case
of Dark Horses, Cormac O’Kane produced and engineered two of the
tracks which was a great experience whereas, I recorded the two
covers at home the old fashioned way with a couple of microphones set
up to record complete live takes and I just recorded a few over a
couple of days and chose what I felt were the most interesting takes.
Over the last two years or so, I have a lot more control over what I
do generally and even though I write my own music without a
songwriting team or co-writer, with the exception of one almost
finished song co-written with my friend Roland Smith, I’m always
happy to listen to advice from people like Cormac or Colin Harper who
was the executive producer of both this project and The Hardchargers
‘Scarecrow’ album.

Answer:  The
obvious things are recording the ‘Dark Horses’ EP both the
sessions with Cormac at Red Box studios in Belfast but also the home
recordings and making the video directed by Mark Case with the
dancers, Neil and Emily; those are memorable, healthy experiences and
I really enjoyed all of the various parts of the whole process.

Another highlight
was producing and recording a couple
of full-band electric tracks in
between the recording sessions for Dark Horses. Both of these
songsshowsome of the
results of another behind-the-scenes highlight for me of exploration
and research whether it’s been listening to some other music
outside of the Blues and deliberately going to local gigs by bands
I’ve never heard of, orexperimenting more
with electricguitar effectsand amplifiers
again after a long period of usingthe samevery minimalist setup. For
example, one of the two songs recorded is an older original song that
I’ve rearranged and rewrittenwith new
lyrics andsome new chords to bring a darker ‘Spanish’
type of sound into it, alongside using a
recently acquired Fulltone Mas Malofuzzfor one of the rhythm tracksand using a
Catalinbread Belle Epoch tape-styleecho pedalfor the solo and this year I bought aMarshall amplifier to usealongside
my old Fender amplifier to have access toa
broader sonic palette. I’ve really enjoyed
playing with some different guitar sounds and demoing tracks at home
to learn more about how I might employ various sounds to bring
texture and atmosphere into recordings, it’s brought me a lot of
enjoyment and and it’s something I’d like to explore further.

I also had a great
time this year doing lead guitar and backing vocals for my friend and
executive producer Colin Harper’s punk recording, ‘Smash The
System’, featuring amongst others Adele from Wookalily, Petesy
Burns from Belfast punk bands The Outcasts and Ali Mackenzie who has
been playing some gigs with me in The Hardchargers. It was actually
that session at Attic Studios in Belfast that lead me to search for
and buy the same specific model of Marshall amplifier that I used on
that session and it’s where I recorded the two band tracks I
mentioned earlier. There are a couple more tracks that I think Attic
Studios will be the right place to record, Jamie Wilson who engineers
there is great for very guitar-heavy recordings as he records a lot
of punk, ska and heavy rock bands.

Lamitschka:  Are you doing
anything to take music beyond its current borders or are you happy
where it is?

Answer:I’ve always enjoyed pushing my own boundaries by playing and
experimenting with music and approaches from outside of the Blues and
Roots genres where I’m primarily focused, which is evident on parts
of The Hardchargers ‘Scarecrow’ album, especially on the six
original songs on there like ‘No Stone Unturned’ and ‘Sometimes’
but I’ve really opened up even more over the last year
experimenting with new sounds. Most notably on this EP is how I’m
using my voice where every track has a slightly different approach to
how I’m singing the song and that feels like it’s opened up a
world of possibilities for how I might sing some newly written songs.

Another skill I
want to work more on, to stretch my own borders, is fully arranging
brass section parts for at least two songs I want to record for the
next Hardchargers album.

Lamitschka:  What will your next
single be?

Answer:There’ll
be a live album released towards the end of the year recorded at the
Empire in Belfast with one of the newer lineups of musicians I’ve
worked with throughout the year, Ali Mackenzie on Bass, Davy Kennedy
on Drums and Scott Flanigan on Keys. I’m hoping that I can get
into the studio again around the same time as that release to get
some more tracks recorded for a second Hardchargers studio album.

Lamitschka:  What inspired you
to become a songwriter?

Answer:I think a
lot of songwriters probably feel similar to me, where you feel that
no one else is expressing what you feel exactly, so you’ve got to
write it and express it yourself.

Lamitschka:  What hopes and
desires do you have?

Answer:I hope
that ‘Dark Horses’ keeps gaining traction because I think it’s
the best of my work recorded so far and I want the opportunity to
build on the lessons learned from it, with more variety within what I
record and of course, I’d like to tour and travel with my music a
lot more.

Lamitschka:  Many music fans
today get their information about artists online. Do you have your
own website and what will fans find there?

Answer:Yes,
people can visitwww.thehardchargers.co.ukfor more information about me and The Hardchargers and watch and
listen to some of our music.