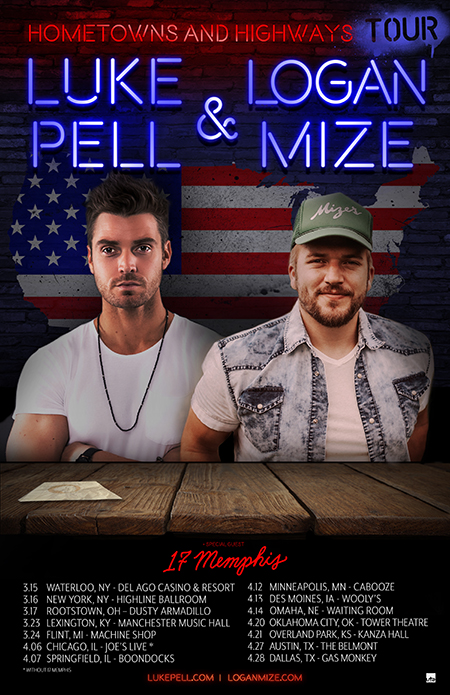 NASHVILLE, Tenn. (January 19, 2018) –  Logan Mize and Luke Pell announced today that they will be hitting the road this spring for their co-headlining Hometowns and Highways Tour with
all tickets on sale Friday, January 19. The first trek of the tour,
kicking off in Waterloo, N.Y., will visit cities across the country
including New York City, Chicago, Dallas, Minneapolis, Austin, and
Oklahoma City. The announcement comes fresh off the success of Logan’s
album Come Back Road, which reached the top 20 on the Billboard
Country Album Sales chart, charted at number 2 on the iTunes Country
Chart as well as the top 20 on iTunes’ All Genre Chart. The announcement
also comes on the heels of Luke Pell’s debut EP release.

The tour will feature special guest 17 Memphis, who have been garnering critical acclaim on their recent introduction into the country music world.

“I’m excited to announce this upcoming spring tour for a lot of good
reasons. We are getting to hit a lot of places we haven’t played in
awhile and we have a bunch of new music to share with everyone,”
expresses Logan Mize. “On top of that we are co-headlining with Luke
Pell. He is a great dude, a military veteran, and he’s got a ton of
excitement around his new music. To say it’s going to be a party is an
understatement..Sure hope to see you out there!”

“I couldn’t be more excited to be touring with Logan and his band this
spring! I’m a huge fan of Logan as a fellow artist and can’t wait to hit
the road with those guys,” Luke Pell stated. “After playing almost 100
dates last year, my band and I have taken a couple months off and are
ready to be back on the road playing new venues with Logan and 17
Memphis who are an incredible talent in their own right.“

Logan Mize is an accomplished country singer/songwriter
from Clearwater, Kansas, who has deep musical roots to his family tree.
His great uncle was Billy Mize, largely known for crafting and evolving
the legendary Bakersfield sound, which included musical pioneers Merle
Haggard and Buck Owens. The fast rising country artist released his most
successful project to date, Come Back Road, last summer with a
Top 20 debut on Billboard and iTunes’ All-Genre charts also peaking at
#6 on Billboard Top Heatseekers chart. The album also debuted at No. 2
on iTunes’ Country chart and features the hit single “Ain’t Always
Pretty” which has been featured on major playlists across digital
streaming platforms garnering over 25 million streams on Spotify alone.

In 2010, several years after moving to Nashville, Logan signed a
publishing/record deal with Big Yellow Dog Music and a booking deal with
a major agency. He spent the next seven years playing seemingly every
venue in every town across the U.S. and winning over fans every stop
along the way. In 2016, Mize made waves when he booked a solo acoustic
tour via social media and traveled more than 20 thousand miles in less
than two months in a 1989 Chevy station wagon named “Glenn” running his
own sound and lighting performing 3-hour acoustic shows for fans across
the country.

Listen to the new Big Yellow Dog Music release, Come Back Road, on New Boots and Country Kind of Love on Spotify and download his music on iTunes andAmazon Music. For more information, please visit www.loganmize.com and on Twitter, InstagramandFacebook.

Luke Pell is one of Country Music’s fastest rising
artists. Playing close to one hundred shows each year across the country
Luke is quickly growing a fan base in every major market. Luke has
native Texas roots with a Nashville sound that creates a unique blend
and Luke’s signature sound. As a former West Point graduate and US Army
Captain (which took him across the world as far as Afghanistan)  Luke
has seen his share of life experience. Luke has called Nashville home
for the past four years signing a publishing deal with Peermusic in 2016
and spends his time off the road in the writing room. Following the
success of his two single releases in 2017, Pell just released his debut
EP, which topped the ITunes country chart and has featured tracks in
the major Spotify playlists New Boots & Wild Country. Follow Luke
Pell athttps://www.lukepell.com/.