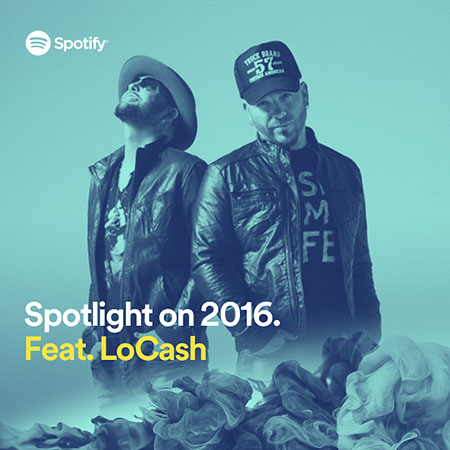 NASHVILLE, Tenn. (December 15, 2015)
– Rising Country Duo LOCASH, who recently broke Top 10 on Billboard
Country Airplay with “I Love This Life,” will be one of the new artists
featured on Spotify’s “Spotlight on Country” 2016 program. The Spotlight
on 2016 list includes the artists whose music appears in Spotify’s
viral charts and is currently being listened to by Spotify’s most
musically influential users. “I Love This Life” is the first single off
their new EP I Love This Life released by Reviver Records, available here.

“Wow! We’re honored & excited to be in the Spotify Country
Spotlight! 2016 is already getting off to a great start with amazing
news like this!” said the duo’s Preston Brust and Chris Lucas.

The duo just wrapped up a successful run of shows in Las Vegas during
Wrangler National Finals Rodeo and will be singing the National Anthem
at the Indianapolis Pacers game before their big New Year’s Eve show in
Indianapolis, IN. LOCASH is featured in a Billboard Country article
highlighting their first Top 10 single, and made Rolling Stone’s “Top 25
Best Country Songs of 2015” coming in at number 23 with “I Love This
Life.”

LOCASH will also perform during IntelliCentrics Concert Series as
part of 2016 Honda NHL All-Star music lineup in Nashville, TN on
Thursday, January 28. Throughout the four-day period, fans will be able
to enjoy an indoor concert series at the 2016 NHL Fan Fair™ presented by
Bridgestone, the official fan festival of the 2016 Honda NHL®
All-Star festivities. Tickets to the 2016 NHL Fan Fair™ presented by
Bridgestone are available now through the Bridgestone Arena box office
and all Ticketmaster outlets. Tickets are $20 for adults and $15 for
children.