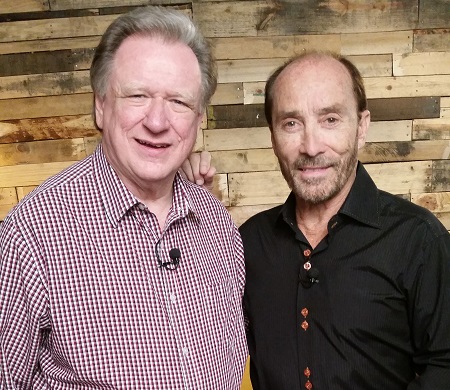 NASHVILLE, Tenn. (November 1, 2015) – Patriotic icon and country music legend Lee Greenwood will be featured in a poignant interview with Tennessee Radio Hall of Fame DJ and radio host, Keith Bilbrey on “Reflections”
scheduled to re-air throughout the week of November 2. “Reflections” is
a weekly half-hour, interview series where Bilbrey leads one-on-one
insightful interviews with country music’s legendary artists. The series
airs on Heartland TV on Thursdays at 8 p.m. ET/ 6 p.m. CT, and
Saturdays at 4 p.m. ET/ 3 p.m. CT. Viewers can also tune in to Blue
Highways TV, Sky Angel Two, The Family Channel or AMG TV to watch. Check
your local listings for channels and airtimes.

Bilbrey’s long-time relationships with the iconic artists who are
featured on “Reflections,” translate into intimate and candid
conversations with each guest. Greenwood will open up about his
childhood on a farm near Sacramento, California, to his journey to
becoming a pop music singer in casinos in Las Vegas, to ultimately
becoming a country singer, spurring multiple No. 1 and Top 10 country
hits including the well-known “God Bless The U.S.A.,” which topped the
country and pop charts.

To learn more about Lee Greenwood and to view details about his upcoming tour dates, visit www.leegreenwood.com.

About Lee Greenwood
Throughout his expansive career, international country music star Lee
Greenwood has earned multiple CMA and ACM Awards, a GRAMMY for Top Male
Vocal Performance on “I.O.U,” in 1985, and a multitude of other
prestigious award nominations. His discography includes twenty-two
studio albums, seven compilation albums, seven No. 1 hits, and
thirty-eight singles including songs like “Ring On Her Finger,” “Time On
Her Hands,” “Dixie Road,” and “Somebody’s Gonna Love You,” among
others. His stand-out hit “God Bless The USA,” has been in the top five
on the country singles charts three times (1991, 2001 and 2003), giving
it the distinction of being the only song in any genre of music to
achieve that feat. It was also No. 1 on the pop charts after 9/11. Known
for his stand-out patriotism and support of the U.S. military,
Greenwood has been honored with the Congressional Medal of Honor
Society’s National Patriot’s Award, and entertained troops on more than
30 USO Tours. He is the National Ambassador for HelpingaHero.org, a
non-profit, non-partisan organization providing support for military
personnel, severely injured in the war on terror.