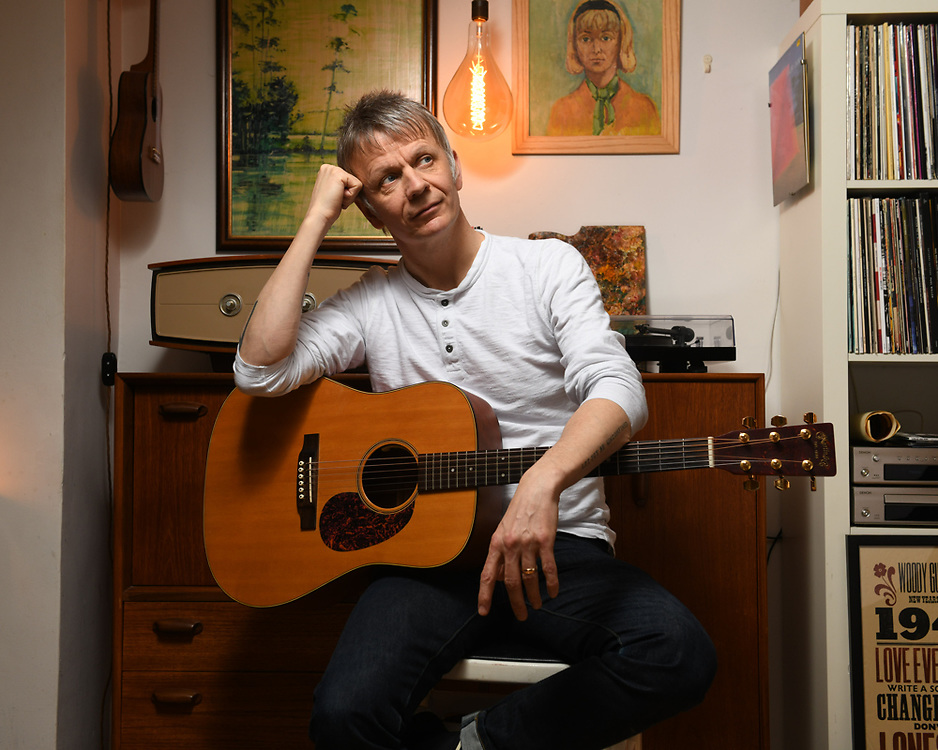 Lamitschka:  Music has many new
fans throughout Europe who may be hearing about you for the first
time. How would you describe yourself and the music you play to
someone who has never seen or heard you?

Answer:  I
play music in an Americana style, guitar-led, generally pretty
up-beat, with echos of the 60s and bits of psychedelia thrown in. I’m
a songwriter, the lyrics are super important to me, and above all I
want to get them across to the listener.

Answer:  Having
one of my songs played on the BBC Radio 2 Country Show was pretty
exciting for me. It was the duet with Angaleena Presley, and having
her on the record amongst so many other great artists and songwriters
has all been fantastic.

Lamitschka:  What is your latest
CD and how’s it doing?

Answer:  Dreams
About Falling came out in May on CD and – a first for me –
on vinyl too. I’m really excited about the response it’s got –
the reviews have been extremely supportive. People seem to really
‘get it’ I’m pleased to say.

Lamitschka:  How did you choose
the title for the CD?  Is there a story behind the name?

Answer: With
my wife Stevie we were talking about some of the themes in the songs
on the album, lots of which are about childhood, trying to come up
with an idea for the cover. She got this idea in her head, a visual
image of me falling through the air. We worked on that for a while
and I remembered that I used to have what
you might call flying dreams; something that’s usually quite
joyous, if a little scary. I flipped it into ‘falling dreams’,
like when you trip and fall and suddenly wake up! Once we had the
title the cover came from there, and I found the perfect image – from
the 1930s. It’s a trapeze artist about to start his show. It’s
that moment before he steps out and makes the leap of faith.

Lamitschka:  Do you write the
songs yourself? If not, how do you go about finding the songs for
your CD?

Answer:  I
wrote all the songs, all but two were written with other people. I
was lucky enough to write in Nashville with Angaleena Presley (Pistol
Annies), Brandy Zdan, Ben Glover, Michael Logen, Amy Speace, Wild
Ponies, and my long-time writing partner Amy Tudor in Louisville.
They are some fantastic writers and it was a huge honour for me.

Answer:  Having
Angaleena Presley duet with me was very special. Earlier this year
her band – Pistol Annies – had a number 1 album on the Billboard
Country chart. That’s quite something, and all the more amazing
that she would sing with an unknown artist like me! But she’s
incredibly generous, and I think she really does like what I do.
Anyway, that definitely makes it more interesting for radio I think,
and people seem to like the way our voices work together – I’m
obviously British and she’s definitely Kentucky! But it seems to
work. I it’s a desperate love story too, of two people torn apart
by war, but not in an obvious way.

Lamitschka:  What will your next
single be?

Answer:  The
new single is Standing On A Star. This one was written with Brandy
Zdan, and she features on the track too (although this one isn’t a
duet as such.)

Lamitschka:  What is your
favorite song among all the songs you have recorded and what’s the
story behind it?

Answer:  It
would be impossible to pick a favourite as they all tell different
stories and show different sides to me. I go through phases of liking
different ones, but I’ve particularly enjoyed playing ‘The Man I
Want To Be’ at live shows. On the other hand, ‘Rum & Smoke’
is great fun to play too as I often get people singing along!

Lamitschka:  How much creative
control do you have over your music?

Answer:  I’m
an independent artist, and I have 100% control. What I’ve learned
to do though is allow people to do their jobs and have input into the
way it sounds, or looks. For example, Neilson Hubbard produced the
record and I handed over all of the responsibility in the studio. If
Neilson thought something was right, I agreed. And the video for
Standing On A Star – we just asked this bunch of kids to make a
video, with no brief; we just allowed them to do their thing. So
while I’m completely in control, I’ve learned to allow people to
do their thing, and it seems to be working.

Lamitschka:  Who inspires you
musically and how deep do your musical roots run?

Answer:  I
was brought up on music. We didn’t have many records in the house,
but the ones we had were really great; The Beatles, Crosby Stills
Nash & Young, Simon & Garfunkle… Quality stuff. Years later
I would return to CSNY in particular and it really shaped my musical
direction, moving into Americana and folk music.

Lamitschka:  What do you think
about today’s music industry?

Answer:  The
music industry has always abused its relationship with the artists –
the people without whom there would be no industry. When music was
first recorded the artists were paid tiny session fees, not
understanding the worth of their artistry. In the 50s and 60s artists
were horribly ripped off by managers and labels alike. With CDs
artists were paid a fraction of the money they’d been paid for
vinyl sales supposedly so the industry could ‘recoup’ the cost of
developing the medium. And for the past twenty years we’ve been
living through the most challenging of times, where music is expected
to be virtually free to anyone who wants it. Somehow artists carry
on, and the reason is that we have to – if you have something to say
you just have to say it. I just hope the art form lasts long enough
that we can get to a point where the creators are fairly paid for
their work.

Lamitschka:  As an artist, you
so many tasks such as recording, touring, interviews. What do you
like best, what’s your favorite activity?

Answer:  I’m
really happy when I’m in the studio. I have a studio at home in the
garden and I’ve produced quite a few records in the for other
people. That’ my happy place! But really I love being on stage and
performing live in front of as audience. To get that immediate
response is priceless, and when it goes well there’s nothing to
beat it.

Lamitschka:  What moments in
your career stand out in your memory as highlights and achievements
which you are proud of?

Answer:  I’v
had so many things happen in my musical life that have just been
incredible moments. Things that have given me such validation as an
artist. For example, I remember getting to know Annabelle Chvostek a
few years back. She’d been in one of my favourite bands, the
Wailin’ Jennys. We became friends, and ended up writing together.
She would wear my t-shirt at her shows, and have me open shows for
her. She would join me on stage to sing, and have me sing with her…
Things like that – little things really – have meant so much to me.
The generosity of musicians is really something very special, and I
have received so much from so many musicians along the way. So it’s
not so much a sense of pride in my achievements per se, it’s more
that I’m grateful to have been able to be friends with such
incredible people, and have them trust me enough to share their music
with me.

Lamitschka:  What hopes and
desires do you have?

Answer:  Honestly,
all I hope for is to get my music heard as widely as possible. I put
so much effort into it and so of course I want it to be as successful
as possible. I guess most artists are the same, you make art in order
for people to experience it.

Lamitschka:  Many European fans
travel to the United States to attend the several of the music
festivals for the opportunity to see so many of their favorite
artists, bands and celebrities. Will you be participating and how
will the fans be able to find you?

Answer:  I’m
taking part in a writing camp called House Of Songs, and we’ll be
performing some of the songs we write at several showcases at
AmericanaFest in Nashville this September.

Lamitschka:  What can your fans
expect to see when they see you in concert?

Answer:  I
usually play solo, just me, an acoustic guitar, and a kick drum! The
music’s generally pretty up-beat, and people have sometimes
mentioned my punk attitude! I like to get involved with the audience,
make them laugh, get them joining in. I like to think it’s an
engaging show. I do my best anyway!

Lamitschka:  Many music fans
today get their information about artists online. Do you have your
own website and what will fans find there?

Lamitschka:  What’s your
favorite song that you wish you could have recorded?

Answer:  There’s
a song called ‘Icy Blue Heart’ by John Hiatt. I learned it from a
version EmmyLou Harris recorded. It’s the saddest, most beautiful
song. I’d love to have recorded that. At the other end of the
spectrum, man… I wish I’d recorded Steve Earle’s ‘Copperhead
Road’, it’s an absolute classic!

Lamitschka:  What message would
you like to send your European fans?

Answer:  Come
and see me on tour with Wade Bowen this summer! I’m playing four
dates in Germany (I’d love to come and see more of Europe of
course) and I’m really excited to get out beyond the UK.