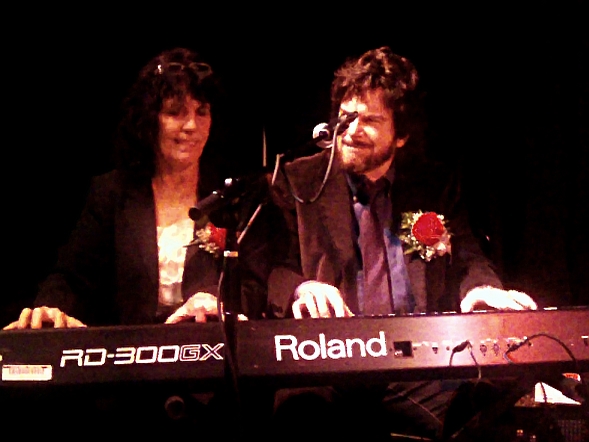 Jack Blanchard:  The cover of one of our Jack Blanchard & Misty Morgan cd albums has a sticker on it that says: “Like Nancy & Lee on Acid.“ 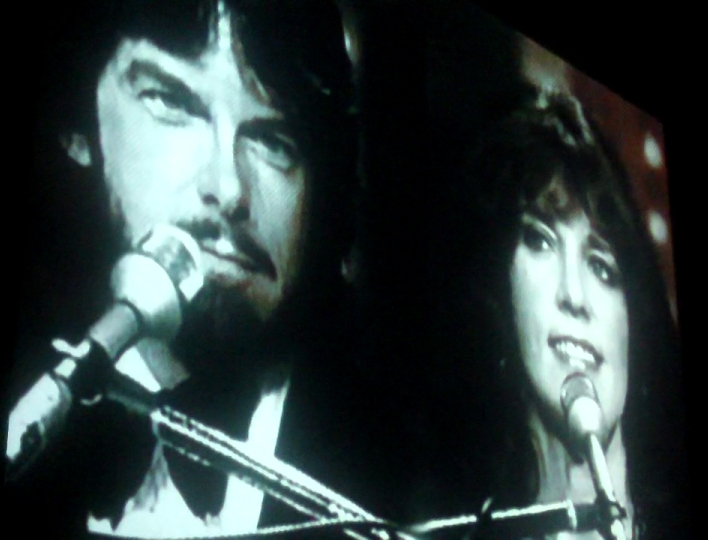 Jack Blanchard: It was a pretty good year. The highligh was our trip to Buffalo, New York to be inducted into The Buffalo Music Hall of Fame, along with the writer of Mona Lisa, Silver Bells, and many more. The conductor of the Buffalo Symphony Orchestra was also an inductee. It covered all forms of music. 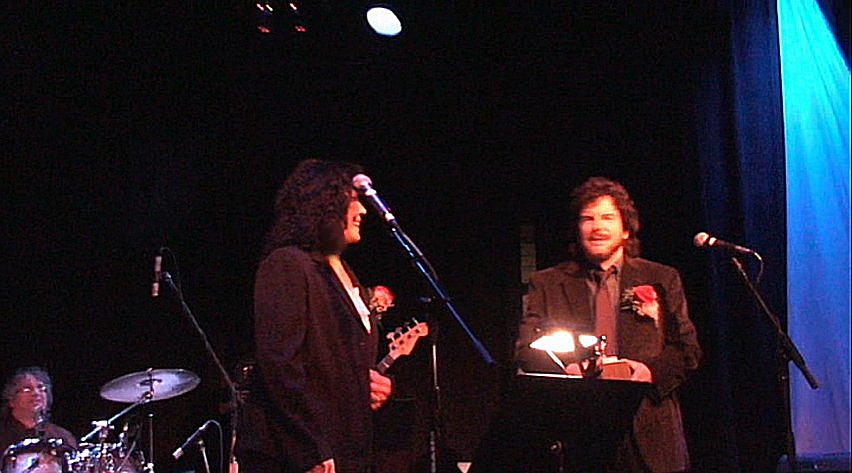 Jack Blanchard: Our newest CD album is “Traveling Music“, which is for sale on CD Baby, Amazon, I-tines, and on our web site jackandmisty.com. CD sales are off somewhat this year, but downloads are up. 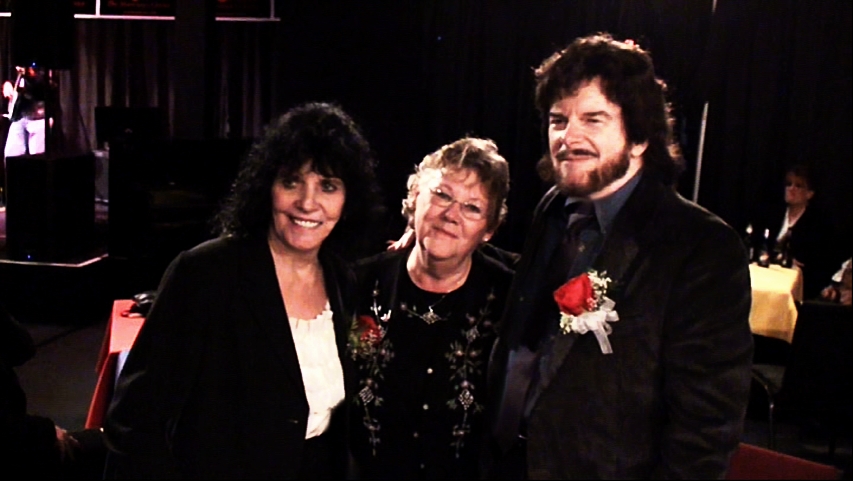 Jack Blanchard: We wanted to do a theme album, where all the songs have something in common. This album is about some of the many different cities and states we;ve traveled to.

Lamitschka: Do you write the songs yourself?

Jack Blanchard: Yes, we write about 95% of the songs we record.

Jack Blanchard: Well, as I mentioned, they are Somewhere in Virginia in the Rain, Tennessee Birdwalk, Loozianna Moon, Carolina Sundown Red, 47 Miles to the Georgia Line, and so on.

Jack Blanchard: Our previous CD on Australia’s Omni Records was an archival collection of songs we’ve written and produced for ourselves and a number of other artists, from the late 1950s through 2004. Sort of a historic theme. The long title is „NASHVILLE SPUTNIK,The Deep South/Outer Space Productions of Jack Blanchard & Misty Morgan“ This one is completely different from anything we’ve ever had out. A look at our early days.

Jack Blanchard: Our curent single „I WILL“ is getting chart action along with major label releases. I think it’s a combination of a great song, one of our best vocal performances, a beautiful arrangement and a 2011 remastering. We’ve never released this song before, in fact it was lost for several years.

Jack Blanchard: We have two in mind… „Memories of You“ and „Call on Me“, both remasters.

Jack Blanchard: We like a variety. We do love songs, mystical songs, songs about life and death, growing old, and changing times. Our biggest hit was a funny song, as you know.

Jack Blanchard: I particularly like „Somewhere in Virginia inthe Rain“ Like most of my lyrics, it contains remnants of my nomadic past. In this one I’m calling her from a phone booth somewhere in Virginia, on a rainy night, to make up after a break up.

Jack Blanchard: Misty and I have always had complete control over our recordings. We hire the musicians and back-up singers, bring demos of the feeling we want, produce the session and the mixdown, and finally, the mastering. The record companies are kind enough to just pay for it all.

Jack Blanchard: Haha! I wrote the song in twenty minutes, and we did it in one take. One run through with the band, and one take… about ten minutes. We’ve never done much layered production, which is popular now. We like everybody there at once, like a party. We think the musicians inspire each other. We seldom overdub anything.

Jack Blanchard: We get wonderful messages from fans all over the world. Some say they grew up with our music, several said that our music saved their lives in one way or another, and others are into our differentness. We’ve never tried to go mainstream, or thought commercially when doing our music. It’s a great feeling to read the encouraging letters and emails.

Jack Blanchard: My interests in music go back to about 1916 and dixieland music, Misty and I have both played jazz, pop, rock & roll, and R&B, besides country music. Whatever put food on the table. We love Willie Nelson, Waylon Jennings, George Jones, Lefty Frizzell, and other country artists, but we also listen to Harry Nilsson, Django Rheinhardt, Van Morrison, and many others. I guess you’d call us eclectic in our tastes. We like some of the newer country artists,too. We just downloaded Amos Lee singing „Cup of Sorrows“. Hayley Oliver is a favorite of ours, and Becky Hobbs.

Jack Blanchard: We like some of the modern country music, although we feel that much of it is overproduced and quantified. Too perfect, thanks to electronics. And, part of the basic country feeling is lost.

Jack Blanchard: Not happy with it. I guess it’s no surprise that we don’t like the age discrimination. Also, the new artists and writers don’t have the opportunity to be heard like we were. When we came to Nashville, you could walk up and down music row and get everybody to take a listen. The superstar system has taken the bookings away from excellent artists they refer to as marginal. We used to have up to ten stars on a show. Now one superstar gets all the money and the rest stay home and watch TV.

Jack Blanchard: I wrote a song called „Bethlehem Steel“ and we were singing it in a Key West night club when two guys walked in and signed us to a recording contract. It was on our first Nashville session and it charted in Billboard. Tennessee Birdwalk was not till three years later.

Jack Blanchard: Our families got more supportive after we had hits.  Misty and I had both left home and were on our own when we started, so there wasn’t much of a family influence.

Jack Blanchard: Neither one of us ever thought of doing anything else. We just love music and felt we were pretty good at it.

Jack Blanchard: Just listening to the radio, I guess. I wrote my first song when I was about seventeen.

Jack Blanchard: Desperation, I guess. Nothing seems to work fast enough for us. We might be considered obsessive.

Jack Blanchard: Besides our recognizable voices, probably the often eccentric subject matter in our songs, and the occasional strange chords. Faron Young told us „Three seconds into the record you know who it is.“ We’re not be the most perfect, but we are definately us.

Jack Blanchard: Being on television with Jackie Gleason, Carol Channing, Ralph Emery, Dick Clark, and all the country stars. Also doing a show at Kennedy Center in Washington DC. Also winning Billboard’s Country Duet of the Year, being Grammy Nominees, and other prestigious awards. It’s nice to be appreciated by your peers.

Jack Blanchard: Not at all. We plan on being found dead in front of a microphone at age 115.

Jack Blanchard: Take road trips. The year we went North to enjoy the Autumn leaves, and this Spring we went to the mountains for a family reunion.

Jack Blanchard: We sing mostly our own songs, including our hits and semi-hits, kid around with the audience with some comedy, and tell stories. Much of it is ad lib. We hardly ever plan ahead. We feel the audience and respond to them.

Jack Blanchard: Yes, we often do. At other times they keep us running all over the map. We have flown as many as eight flights a week, while our band drove the bus.

Lamitschka:  Do fans mob you everywhere you go or do they respect your privacy?

Jack Blanchard: At shows they come around to us afterwards in crowds, but when we’re in a restaurant they ususlly just wave and smile.

Jack Blanchard: One that just came in today: „I just read your bio on your website, and I must admit, it has me a bit choked up. You two are quite exceptional and talented, and I cannot help but send you this Email to express my admiration for you, your lifestyle, and your many decades of love and marriage. Thanks for your music, and your inspirational values.“

Jack Blanchard: Thank you for seeking out our music. We love to hear from you.

Lamitschka:  How do you feel about being winning the Billboard, Grammy, BMI and ASCAP Awards.?  What has it done for your career?

Jack Blanchard: It has helped us to get bookings and recording deals, and the plaques on the wall keep us fairly happy.

Jack Blanchard: In Millville, Pennsylvania, an elderly dwarf, who called himself “Shorty” jumped up and down in front of the stage, ordering the audience to “Shut up!” and “Stand back, there!”
He had no official capacity, but nobody knew that. He kept it up throughout our show. You could look into Shorty’s eyes and see that nobody was driving. We have hundreds more of them. I write a regular newspaper column that contains them all. The column also has an internet circulation. To subscribe, just email me at jack@jackandmisty.com.

Jack Blanchard: I wake up. Look in the mirror, and see that I’m still breathing. I like 68 degrees and sunny. That’s Faherenheit. I’m sure I spelled that wrong.

Jack Blanchard: Love for each other, love of our work, and wonderful feedback from fans.