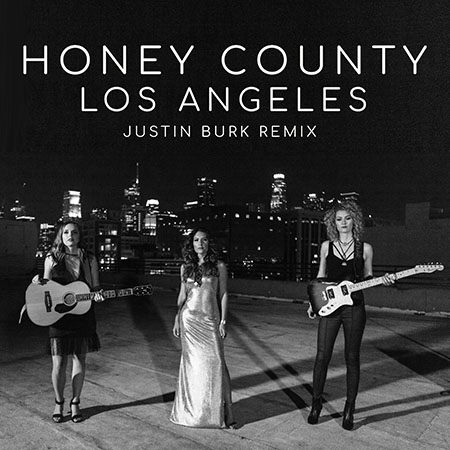 LOS ANGELES, Calif. (October 18, 2018) – LA-based country trio Honey County has released the remix of their single “Los Angeles,”
which was originally released in 2017. The remix, by Justin Burk, was
most recently featured on the NFL Network “Total Access” highlight reel
for the LA Rams football team. You can watch the video here. The single can be found can be found on Apple Music, Amazon Music, Spotify and Pandora.

“We
couldn’t have been more excited to hear our song ‘Los Angeles’ on the
NFL Network’s post-game recap for the Rams! We’re so thankful to Attique
Iqbal for making it happen and of course Justin Burk for lending his
amazing remix talents!” said Katie Stump of Honey County.

Nov. 9 – Anaheim, Calif – The Fifth for Women in Country Music

Rooted in three-part vocal harmonies, southern twang, and pop hooks, Honey County
is a female country trio formed by singer/songwriter Dani Rose,
featuring the stacked voices, songwriting and layered guitar work of
bandmates Devon Jane and Katie Stump. As one of Rolling Stone’s “Top 10
Artists You Need To Know,” the band has maintained a busy schedule both
onstage and in the studio, sharing shows with artists like Lady
Antebellum, Brett Eldredge, Jake Owen and Easton Corbin while also
crafting modern, melody-based country songs. With a prestigious
placement of their song ‘Love Someone’ featured in an episode of CMT’s
‘Nashville’ this past summer, the band is excited to be working on new
music and plans to release an EP in late 2018. This is country-wide
country music, presented in three-part harmony. Keep up with Honey
County on their website at www.honeycounty.com.