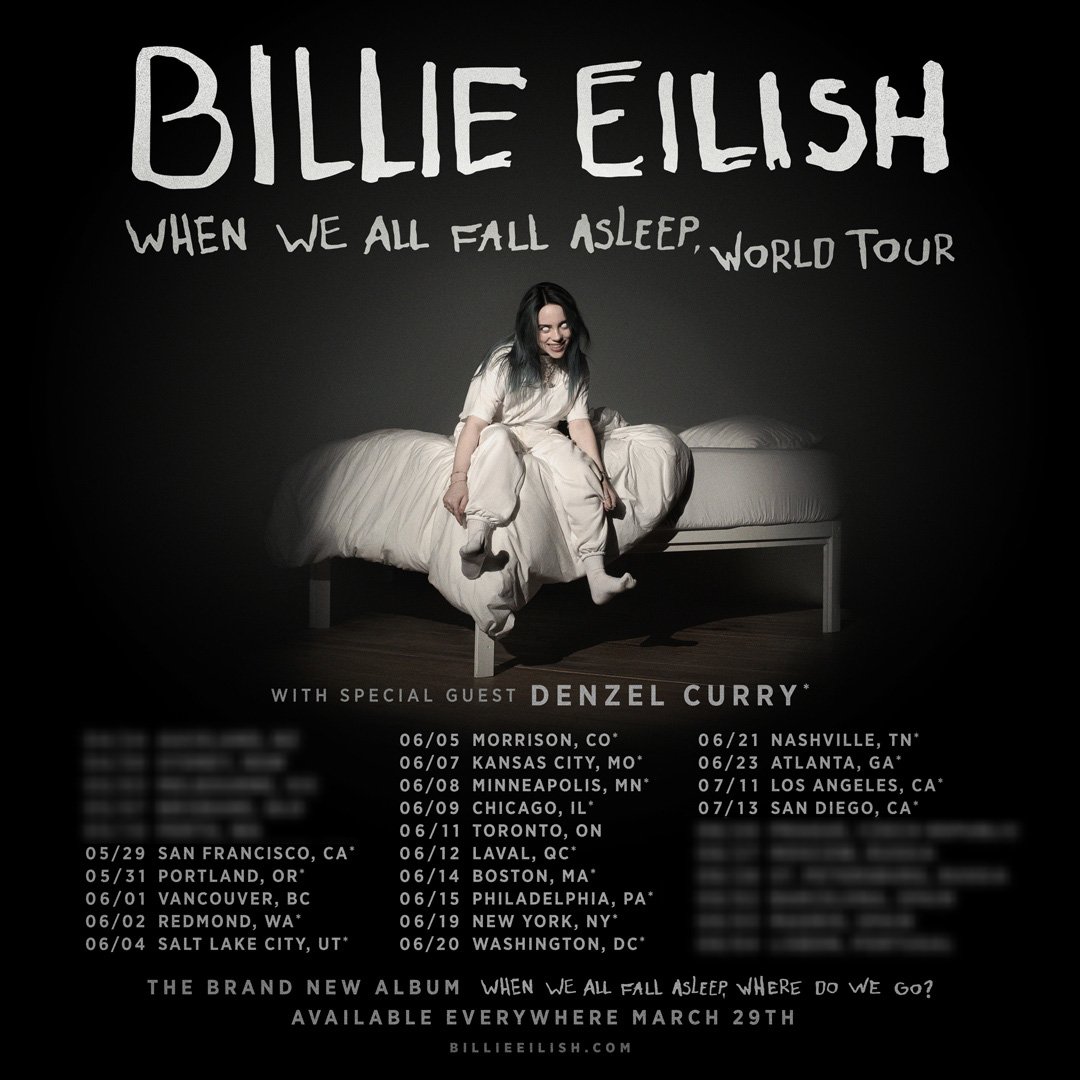 Following the announcement of her forthcoming debut album, “WHEN WE ALL FALL ASLEEP, WHERE DO WE GO?” and the release of her latest song and video for “bury a friend,” Billie Eilish has announced her WHEN WE ALL FALL ASLEEP WORLD TOUR, first revealing her North American tour dates for 2019.

American rapper Denzel Curry will be joining Billie as direct support with the exception of Vancouver, where Billie’s brother Finneas will be supporting. Next week, Billie starts her SOLD-OUT European tour through March, then will be returning to North America to make her Coachella Festival debut on Saturday, April 13 & 20. For more details on her upcoming live dates and ticket information, go to: http://www.billieeilish.com

Billie Eilish’s meteoric rise to global stardom has been nothing short of phenomenal and arguably unparalleled to date. Since her ‘Ocean Eyes’ debut,
Billie has quietly, yet unapologetically infiltrated the forefront of
pop. Thanks to a growing legion of loyal followers across the globe, an
EP that has sat in the Billboard Top 200 for more than 18 months now, more than 5 billion combined streams globally,
and tours that have sold out consecutively around the world, Billie
Eilish is ready to release her highly anticipated debut album ‘WHEN WE ALL FALL ASLEEP, WHERE DO WE GO?’ on March 29 via Darkroom/Interscope Records. PRE-ORDER HERE.

“WHEN WE ALL FALL ASLEEP, WHERE DO WE GO?” was written, produced and recorded entirely by 17-year-old Billie Eilish and brother Finneas in their childhood home of Highland Park, Los Angeles. Recorded in Finneas’ bedroom
opposite Billie’s, the pair spent most of 2018 writing songs on the
road, then spending many days and nights when off the road, at home,
recording the album. The first song to be revealed is “bury a friend,” which has since amassed more than 50 million combined streams since its release. The official Michael Chaves-directed music video also debuted last week and was the #1 Trending Video on YouTube with more than 23 million views to date.

Watch the video for “bury a friend” HERE.