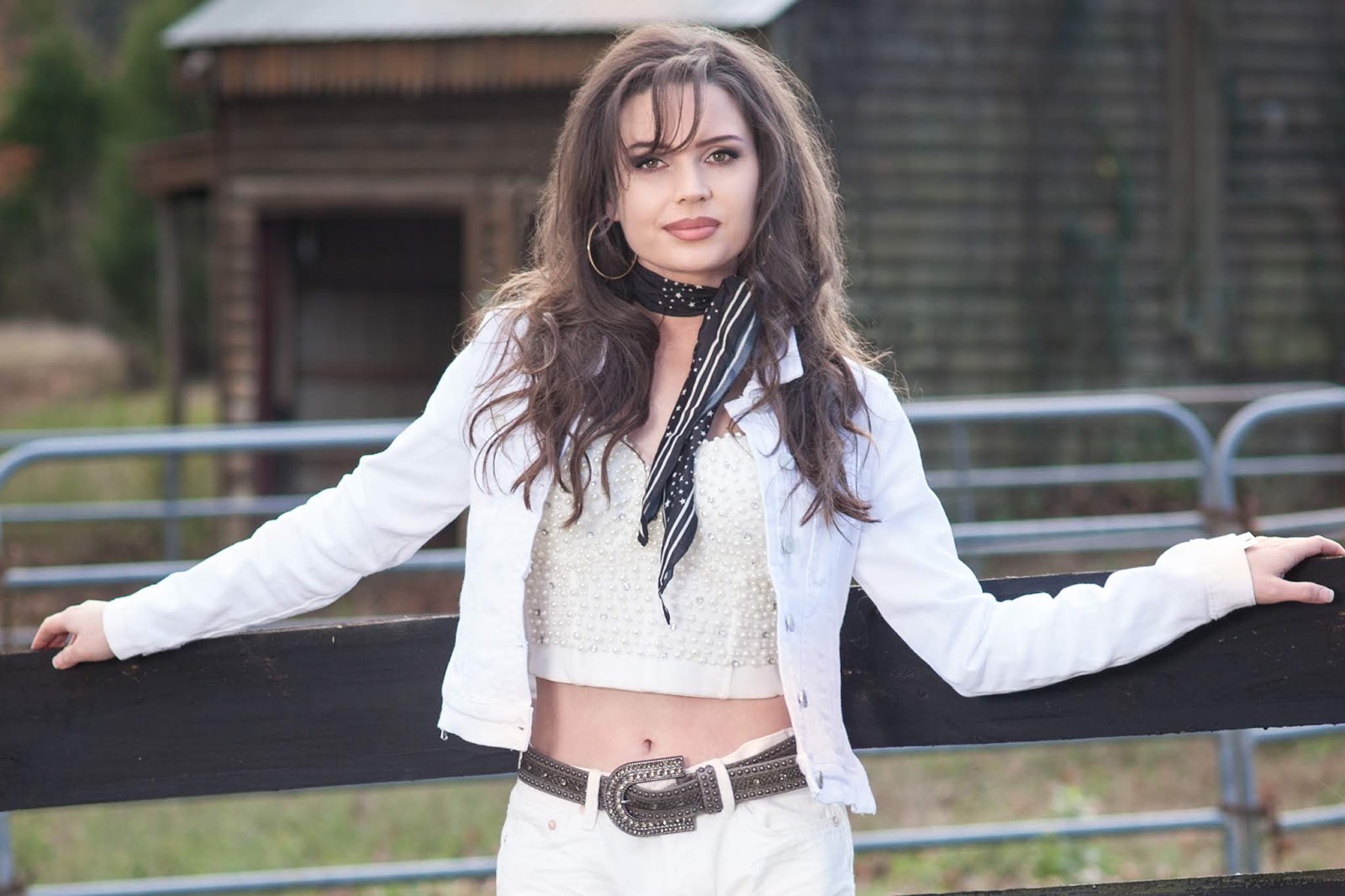 Alexis Ebert is set to “Ride Or Die”
with new single

Free-spirited singer songwriter
creates music to have fun to

Alexis Ebert’s list of achievements is
impressive.  When you meet her, it’s even
more impressive to realize that she has already packed all this into such a
young life.  Her resumé includes items that
performers twice her age are still dreaming about.

Opening for Tanya Tucker as a child,
snagging a song publishing deal at the age of eleven. Then performing in a
major theater production and touring when she was twelve, as well as singing
for the President. Sharing the same stage as Keith Urban, Miranda Lambert, Reba
McEntire, Sugarland, Trace Adkins and many more.  Having her songs included in the soundtrack of
theatrical movies.  Arriving in Nashville
and cutting an album followed by the heartbreak of a major label record deal
that fell apart.

Experiences, both good and bad, that have
served to empower Alexis to make her the songwriter and recording artist she is
today. Now she has a new single, “Ride or Die” with a full album to
follow.  During the 2019 Country Radio
Seminar, we sat down to talk about her new music (the video for “Ride or Die”
includes a cameo appearance by John Rich) and her unique musical journey.

Your new single, “Ride or Die,” will
drop March 29, and that’s a real rockin’ song that you wrote with Tammy
Hyler.  It sounds like you had a lot of
fun with that song.

Alexis Ebert:  Yes, a lot of fun!  I went into it wanting to write a bad-ass
song.  Basically, the story of “Ride Or
Die” is about the guy who isn’t just going to pick you up from jail, but he’d
be sitting right next to you, there in jail. That person who is just going to
be there regardless, good or bad. They’re going to hang with you. You’re
probably going to get into some trouble but it’s going to be worth it. That’s
the whole idea behind it.  There’s a
music video that we shot. There’s a cameo from John Rich in the video. That
video should come out in the next couple of weeks.

That song is the debut single from an
upcoming album. You’ve been writing with several of Nashville’s top
songwriters. You’ve said you  don’t write
‘relationship’ songs much …about heartache and breakups.  You like to write songs that are empowering
and you like to write more for the listener than for yourself to enable them an
escape. Will the new album focus on those aspects?

AE:  Yeah.
It’s a very fun record. There is nothing in it that is ‘woe is me.’ I
wanted to write a fun album. I wanted to give people an outlet, an escape and
to not think of problems or things going on in the world.  It’s rockin’ and it’s fun. It’s Country. It’s
kind of an ode to 90s Country music that I grew up on.

How far along are you with the album?

You were six years old when you
performed a professional gig, opening for Tanya Tucker at the Oregon Jamboree.
Can you still remember that special day?

AE: Yes! I’m a pretty confident person. I’ve
always been that way even as a small child. I remember being super excited,
super confident until I got up on stage, and then I was like, errrr, there’s a
lot of people in this audience! But I made it through and I did it.

Do you remember what you sang?

AE: I always had an attraction to adult songs, so
I sang “Unchained Melody” and “A Girl’s Gotta Do What A Girl’s Gotta Do” by
Mindy McCready.  My parents let me sing
whatever I wanted to sing as a kid, so nothing was off-limits. I would
sometimes change the words to songs if they were inappropriate. If the lyrics
said ‘beer’ I would change it to ‘root beer.’
Because you can’t have a six-year-old talking about beer!

When you were only 12, you were selected
to join the cast of ‘Country Tonight’ in Branson, Missouri, and on tour.  You had to dance, sing and act.

AE: Yes. We did two shows a day, six days a
week.  I did that for about a year.  It was ‘Country Tonight’ at the Ray Stevens
Theater. It was all country music. Some older country, some contemporary
country.  I would slide down slides and
be carried as I sang.  I danced and I
acted. One of my original songs that I wrote got picked up in the show.

How did that experience affect you and
your musical journey?

AE: I think because I started singing and
performing so young, and my love of music started so early on, that I’ve
absorbed every genre, every artist, every band, every type of music that I can.
I was always a Country singer at heart, but I’ve been able to be exposed to
many different types of music.

Did those early years of performing
build your feeling of confidence on stage?

AE: I never even doubted it. I never went through
a time when I felt that I was not confident. It was just so natural to me. My
mom has a story, when I was little and some Award show was on the TV. She says
I looked at her and said, “How am I going to know how to get my award? How am I
going to know where to go to get it?” And she was, like, “What are you talking
about?”

But you could imagine yourself going up
on stage to receive an award?

AE:
Absolutely! (laughs)  My family
are not musical whatsoever. They’re not musicians, they don’t play instruments
or sing. For me, it just came out of nowhere.

One day, you had tickets to see Shania
Twain in concert, but you ended up not going because you received a special
invitation. What was that about?

AE:  My dad was a Shania fan. He always wanted me
to be a strong independent woman.  He got
us tickets to Shania. I’m not sure if it was for my birthday or what it
was.  But then I got a call from Diane
Hooley who was then working with the Governor [of Oregon]. She said, “We want
Alexis to sing for President Clinton.” She had seen me in a nursing home,
because I would go and sing and shake people’s hands at the nursing home. So I
got asked to sing for the President and my parents let me make the decision on
my own, if I was going to sing for the President or go to the Shania Twain
concert, because it was on the same night.
It took me about two weeks to decide if I was going to sing for the
President or not.  My bus driver, believe
it or not, helped me make that decision. She said, “Alexis, you can probably go
and see Shania some other time. But I don’t know if you’ll ever be able to sing
for the President again.” So that’s what helped me make the decision.  Then radio and TV stations around my home
state found out about it. They somehow got hold of Shania and she sent me
backstage passes to meet her before the show, so I went and met her and brought
my whole family.  I met her and then
raced across town to sing ‘Cowboy Sweetheart’ and the National Anthem.

You came to Nashville in 2003. You
quickly secured a publishing deal, then a record deal. You recorded an album of
self-penned songs, then the label shelved the project.  That must have been devastating.  How did you deal with that kind of rejection?  A lot of people would have said, “That’s it.
I’m packing the suitcase and going home.”

AE:  I’m not going to lie.  That was something that was talked about, me
leaving. But I just couldn’t. My heart couldn’t do it. Even when I wasn’t
signed anymore, I never stopped writing. I never stopped performing. I just
kept doing it. I graduated from high school really early as I was home-schooled,
because I was performing in Branson as a child.
But I did go through a little bit of confusion and heartbreak.  I think that’s what’s so important about my
journey. Now I’m in my twenties. I’m not a kid anymore.  For a while I questioned if I was good
because of how old I was or was I just good? But I just never gave up.

Did anything good come from that early
experience of rejection?  When you look
back at what you had recorded at that time, would you be comfortable with that
music now?

AE:  Yes, I think it was a great record. I think
it was just timing. I don’t think I was supposed to be a ‘child artist.’ That
rejection, if anything, just made my desire greater to stay in music, because I
had to really fight. I’ve been doing this for so long, I’ll never take it for
granted.

What were your influences growing up?

AE:  I grew up watching CMT, Jerry Springer and
figure skating. I think that explains so much about me!  My father worked in a mill and a trucking
company, and my mother was a makeup artist. So I got two different sides of the
spectrum.  They were both workaholics. My
mom travelled a lot and my dad was always at work. My aunt Linda basically
raised my brother and me. She’d turn on the TV and it was always CMT, Jerry
Springer and figure skating! That’s how I fell in love with Country music
because she watched CMT all day long.

Alexis Ebert has been
described as “The Marilyn Monroe of Honky Tonk” which brings to mind two very
different entertainment genres.  But it
makes sense when you meet her. She combines a confident, outgoing personality
with just a hint of vulnerability that comes across in her music. And, like
Marilyn, Alexis has the strength of character that determines her success.

An established songwriter and performer,
she is now signed with two of Nashville’s most prominent independent music
publishers: Wrensong Music Publishing/Rezonant Music Publishing. Her new
single, “Ride Or Die,” is now at Country radio and drops on March 29.