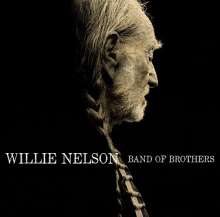 Willie Nelson, who doesn’t know him, who can pass him by when he likes music with American roots? Right. Nobody!

The album carries fourteen songs, including nine brand new compositions, these nine treats and five interpretations were produced by Buddy Cannon. Published on Legacy and recorded from October 2013 to March 2014 in recording sessions at Nashville’s Sound Emporium Studios, Pedernales Studios in Austin, and Hit Factory Criteria in Miami.

Willie Nelson released “To All The Girls I Love”, his first top ten album in more than three decades, and now the fan base can look forward to “Band Of Brothers”.

The album is a concept album, both in terms of its musical and lyrical orientation, and after almost 20 years (“Spirit” / 1996), it is an album by the Southern Rebels, which almost exclusively presents new song material. According to an interview with Rolling Stone, Willie Nelson said: “I was on some kind of writing trip. It was good to write again, the feelings just flowed into words. ”

The song “The Wall” was chosen as the dramatic highlight of the new album and there will be a video for this song.

“The Wall” comes across as a kind of self-reflection, and describes the artist Willie Nelson very well, and should make it the top of the charts, also outside the country scene. Similar in content and very easy to listen to, “Send Me A Picture”, is a song in which Willie succeeds in following his thoughts completely.

But Willie knows how to party, and so it doesn’t surprise me that songs like “Used To Her” and “Wives And Girlfriends” also feature exuberant southern melodies on the album.

For me, after listening to the album several times, it is a milestone, not only in Willie Nelson’s personal discography, but especially today, when country music in Europe appears in a completely new consciousness and is being rediscovered.

Out of the five new interpretations, the version of Gordie Sampson’s and Bill Anderson’s “The Songwriters” stands out for me, this song will be at the top of my personal playlist for a long time.

In conclusion, “Band Of Brothers” Willie Nelson is a very coherent concept album, perfectly produced and, in my opinion, a very personal album by a real outlaw. May the album be followed by many great concerts and maybe even more albums.  This is an absolute buying recommendation from me.