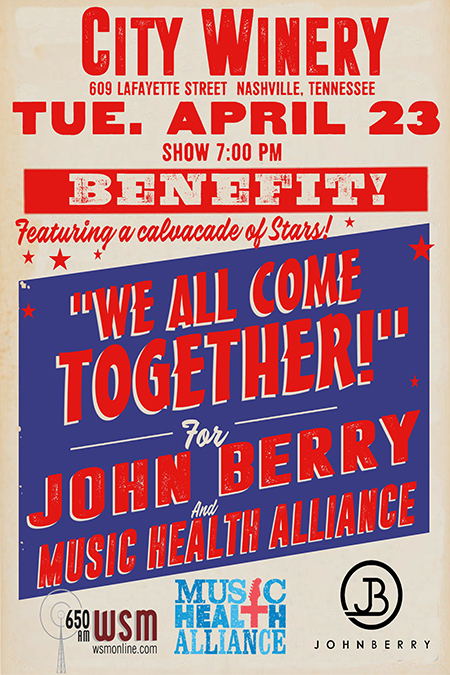 “We All Come Together” for John Berry and Music Health Alliance, a benefit concert scheduled for April 23 at City Winery will raise money to offset the medical expenses not covered by insurance for John Berry, who was diagnosed with throat cancer in January. A portion of the ticket sales will go to Music Health Alliance to fund financial assistance to others in the music community. Tickets can be purchased here.

“Wow! We are completely and utterly overwhelmed at the outpouring of
love and care for both of us during this time. The music community has
all come together for us and we are humbled to be friends with such an
amazing group of artists and proud to be part of an industry that cares
so much for each other,” said John and Robin Berry. “A few years ago we
were faced with the daunting task of finding health insurance for our
family. Music Health Alliance stepped in and expertly guided us through
the process to find the plan that was right for us. We introduced our
band and fellow musician friends to this incredible organization because
it’s always good to have help navigating through the maze of health
insurance options and Music Health Alliance made the task manageable.”

“City Winery Nashville is proud to host  the benefit, “We All Come
Together” for John Berry and Music Health Alliance. As a live music
venue in Nashville, we have the utmost respect for the musicians and
artists who have graced our stage,” said Mike Simon, Talent Buyer, City
Winery. “We always strive to be a philanthropic force, and we’re humbled
to give back to the music community through our friends at Music Health
Alliance.”

Artists who have stepped up to perform have been revealed the past week by media partner WSM Radio and live-streamed on The Heartland Network on the Cody, Coffee and Country show, with the full performance line-up announced this morning.

GRAMMY Award-winning country star John Berry continues
to celebrate the 25th anniversary since signing his first record deal
and has recently charted at #30 on the Music Row Breakout Charts with
the single, “Beautifully Broken,” which is featured in the soundtrack
for the upcoming movie of the same name. Berry has placed 20 singles on
the country hit parade charts, six of which went Top 5 as well as a No. 1
on the Billboard and Radio & Records country charts. He has earned
numerous Gold and Platinum records. Berry’s co-written “A Mind Of Her
Own” and “Kiss Me In The Car” introduced him to radio audiences in 1993.
Then, “Your Love Amazes Me,” “What’s In It For Me” and “You And Only
You” thrust him to stardom in 1994. “Standing On The Edge Of Goodbye,”
“I Think About It All The Time,” and “If I Had Any Pride Left At All”
were all major hits the following year. “Your Love Amazes Me” earned
Berry a 1995 GRAMMY nomination. In 1996, he scored a GRAMMY win for his
participation in Amazing Grace: A Country Salute to Gospel Vol. 1. Berry
took “Change My Mind” into the country music Top 5 in that same year.
“She’s Taken A Shine” became an even bigger hit in 1997. The same year,
he was nominated for CMA Vocal Event of the Year for “Long Haired
Country Boy” with Charlie Daniels and Hal Ketchum. Both fans and the
media took note when “There He Goes” was released as a 1999 duet with
Patsy Cline. Berry’s two most recent albums, What I Love The Most and
his holiday album, Christmas, are both available now on his website as
well as iTunes and other digital retailers.  Berry’s TV show, Songs
& Stories with John Berry, airs weekly on Heartland Television, The
Family Channel, The Country Network, Roku (via Heartland), AMG TV,
Country TV (New Zealand), and Keep It Country TV (UK). For more
information, visit songsandstories.com. Follow John on his website at www.johnberry.com.