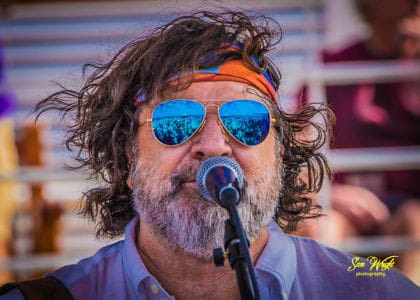 Wayne Toups has been dubbed with such nicknames as “Le Boss” or “The Cajun Springsteen”. He is one of the most talented and commercially successful acts to ever come out of Acadiana. You’ve heard him without even realizing it if you have ever listened to a song by Alan Jackson, Sammy Kershaw, Mark Chesnutt, Clay Walker…the list goes on and on from there. His sound is a healthy mixture of Cajun music, zydeco, R&B, and rock into a genre that he calls “Zydecajun”.

Toups was born on October 2, 1958, in Crowley, Louisiana. He started playing the accordion at 13 and soon began performing the music of accordion legends such as Iry LeJeune and Belton Richard. After performing with The Crowley Aces and Camey Doucet, Toups “roots rock meets traditional Louisiana sound” began to grab the attention of younger listeners throughout the South. As his “Zydecajun” sound gained more popularity, Mercury Records signed him leading to the release of the critically acclaimed and groundbreaking album Zydecajun in 1985.

Toups’ success grew exponentially as he would follow up with such efforts as Blast From The Bayou, Johnnie Can’t Dance, and Fish Out Of Water. He would also play on hit country songs such as “Little Bitty” by Alan Jackson, “Sure Is Monday” by Mark Chesnutt, “Live Laugh Love” by Clay Walker as well as many others during that time period. His music has been featured on the soundtracks for Steel Magnolias, and Broken Bridges. Back To The Bayou was released in 1995 and wound up being the fastest-selling record for Swallow Records. And on top of all of that, Toups was featured on the 1990 Super Bowl telecast held in New Orleans that year.

Toups would go on to release a number of critically acclaimed albums throughout the 2000s, and 2010s. One of his biggest successes came when he collaborated with Steve Riley and Wilson Savoy on The Band Courtbouillion. The album would win the Grammy Award For Best Regional Roots Music Album at the 55th Annual Grammy Awards. Wayne Toups continues to play the New Orleans Jazz And Heritage Festival along with consistent touring particularly throughout the Southeastern United States.