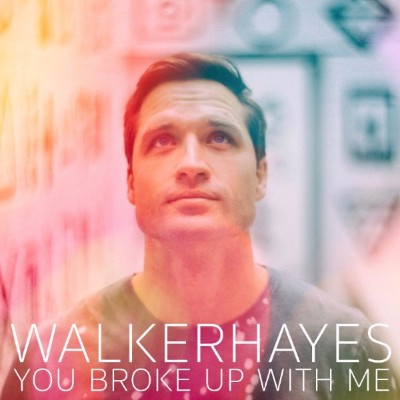 WALKER HAYES HEADS TO COUNTRY RADIO WITH MEGA MOMENTUM BEHIND “YOU BROKE UP WITH ME”
Nearly 50,000 downloads and 8 million streams from fans pre-empt 6/5 ship date

NASHVILLE, Tenn. – Singer/Songwriter and Monument recording artist Walker Hayes is one of Rolling Stone’s 2017’s
“Country Artists to Watch” and one of CMT’s “New Artists You Need to
Know.” Hayes is taking that momentum and delivering his single “You
Broke Up With Me” to Country radio today (shipping today/going for adds
on June 26).  With nearly 50,000 copies of the single already sold and
over 8 million streams-and-counting, he’s heading into stations with
impressive early fan engagement! The witty and unapologetic track,
co-written by Hayes, Thomas Archer and Kylie Sackley, and produced by
Grammy Award winner Shane McAnally, serves as his first release.

“Taking ‘You Broke Up With Me’ to radio is a dream come true,” says
Hayes. “The Arista team is absolutely killing it out there. The early
support we’re getting is unreal. I can’t wait to see what the future
holds for this record.”

Hayes’ 8 Tracks Vol. 1 and Vol. 2, released in 2016
through SMACKSongs & Rarespark Media Group, is a collection of 16
songs he had written and recorded himself that garnered the attention
and landed the singer/songwriter on Spotify’s Viral 50. The response
attracted opening spots on country duo Dan + Shay’s fall 2016 Obsessed Tour, Bobby Bones’ Funny and Alone Comedy Tour and this fall’s upcoming Thomas Rhett Home Team Tour. This past January, Hayes delivered “You Broke Up With Me” to all digital and streaming platforms in tandem with a music video recorded in his recording studio, The Shack, just off Music Row, available here on VEVO.

Monument Records
Sony Music announced the re-launch of their label Monument Records in
January of this year, with respected industry veterans Jason Owen and
Shane McAnally serving as co-presidents. Critically acclaimed newcomers
Caitlyn Smith and Walker Hayes are Monument’s leading artists. The label
takes the name of Fred Foster’s label, which was home to Kris
Kristofferson, Dolly Parton, and many of Willie Nelson’s early
recordings. The original Monument opened in the 1950s and closed in
1990.