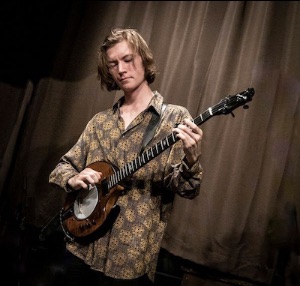 Travianna Records
would like to congratulate this year’s winner of The Steve Martin Prize
for Excellence in Banjo & Bluegrass, Victor Furtado. Victor is the
brilliant clawhammer banjo player that performs with Travianna Records’
neo-traditional band, The Wildmans. It’s no wonder the prize’s Board of
Directors have recognized Victor’s talents – they’re incredible. As
Bluegrass Today said, Victor is “a young man with an absurdly precocious
talent, and a depth of understanding of old time music that is at odds
with his age.”

At 19 years of age, Victor is the youngest recipient of the award and
will no doubt gain more attention from such an accolade. As the youngest
of nine siblings, he has been immersed in bluegrass, old time, and
classical music his entire life. He is known for his uniquely innovative
banjo style and genre-blending tune writing and is currently studying
at the Berklee School of Music in Boston, MA.

Victor has performed extensively from fiddlers’ conventions to venues
like The Grand Ole Opry. He has won many of the most competitive banjo
competitions including Galax, Clifftop, Freshgrass, Maury River, and the
Virginia State Fair.

Victor was completely surprised by his award. He says,

“It
was Tuesday morning, the one day in which I don’t have any classes. I
woke up abruptly from the jarring sound of the apartment door buzzer. I
quickly unlocked the door thinking it was my friend, instead, it was the
mailman who was very unhappy about running up four flights of stairs.
He handed me an envelope and had me sign for it. I slowly opened the
envelope with zero expectation of what it might be, all I knew is that
it was from Béla Fleck. It actually didn’t cross my mind that it would
be the Steve Martin Banjo Award. As soon as I opened the envelope and
saw the certificate and a check for $50,000 I just sat there with my
heart racing for a few minutes and shouted to my roommate/band member
Eli Wildman ‘HOLLYYYY WHAAAATTT?!’  It was really surreal to see the
signatures of my banjo heroes whom chose me for this award. I feel so
honored, motivated, inspired, and grateful. I’ve always been excited
about music and especially clawhammer banjo. Winning this award is
reaffirming to me that this is a reasonable pursuit as a career and life
dedication. I am so honored.”

The
Wildmans recently finished their first project with Travianna Records.
After the recording, Executive Producer Mark Hodges stated, “It’s unreal
how tight this group plays together. Their original music is complex,
and it just flows out of them. I think we’re witnessing the future of
the genre right before our eyes.” There’s no doubt that Victor’s banjo
style plays a big part in that.

The new project is currently being mixed and a new single from the group will be available soon.