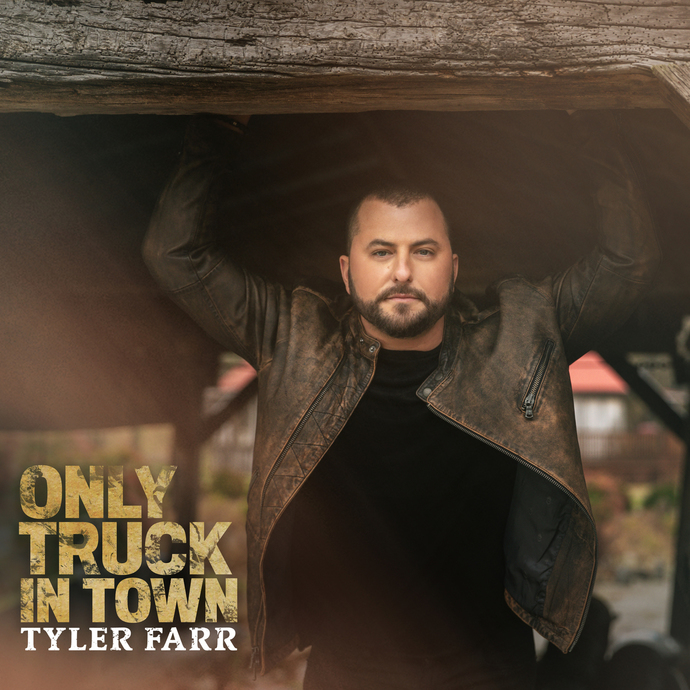 BBR Music Group’s chart-topping Tyler Farr announces that his EP, Only Truck in Town will be released digitally this Friday, June 5. His first body of work since 2015, the EP will feature four songs, including his current single “Only Truck in Town.” The music video for the EP title track and current single will premiere on CMT’s Hot 20 Countdown on Saturday, June 6th.

To
celebrate this hotly-anticipated project, Farr will be Facebook’s
Artist of the Day upon its release on Friday and will go live with
megastarJason Aldeanon Instagram,Monday, June 8 at 7pm CT. Aldean produced the project andFarr’s current single, “Only Truck in Town”,
was the first music released via Aldean’s Night Train Records. The two
will talk about the new project, what it was like in the studio working
together, their friendship and quarantine activities.

“It’s been five years since I put out the Suffer in Peace
album—I love my fans and they have been waiting patiently for new music
and now I can finally say that the new music is here…for them,” said
Tyler Farr. “These songs really speak to who I am—my good buddy, Jason
Aldean, produced the EP and knows me better than most people so working
with him just felt right. Together we created something very real and
that’s exactly what I want my fans to hear from me.”

With
his wife being a critical care nurse working in the Covid unit, Farr
has seen the impact of the pandemic firsthand and has been getting
involved the past few weeks. In addition to supporting healthcare
workers and the staff at the Williamson County Medical, in an effort to
thank the essential drivers who have been making sure things get to
where they need to be, teamed up with US Xpress to perform for and chat
with their drivers on a livestream. In addition, last week Tyler
performed on the Folds of Honor Rock n’ Raise virtual charity concert
series.

Fans
have already connected with Farr’s latest track, “Only Truck in Town,”
with the mid-tempo love song garnering more than 2 million streams since
its release. Oozing with rock electric guitar and signature Tyler Farr
grit, “Only Truck in Town” is an ode to a country love— and perhaps a
nod to Farr’s new season of life. It seems as though the guy from
“Redneck Crazy” finally found the right gal to sit in his shotgun seat.

Despite
settling down, Farr is still no stranger to shenanigans—the music video
for “Only Truck in Town” features Tyler doing donuts in his truck,
along with a little manual labor before a bonfire with the band. Tune in
Saturday morning to CMT’s Hot 20 Countdown to watch the world premiere.

The
Missouri native has three No. 1 songs to his credit (“Redneck Crazy,”
“Whiskey in My Water,” and “A Guy Walks Into a Bar”). With his debut
album Redneck Crazy released in 2013, Tyler Farr landed at No. 2
on the Billboard Country Albums Chart and No. 5 on the Billboard Top
200. His dry wit and energetic live show soon earned him coveted opening
slots touring with Jason Aldean, Florida Georgia Line, Brantley
Gilbert, and Lee Brice. With the release of his highly-anticipated
sophomore album Suffer in Peace in 2015, Farr once again landed
in the Top 5 on both the Billboard Top 200 Albums and Billboard Country
Albums Chart making Farr the only solo male country artist to have his
first two studio albums debut in the Top 5 on the Billboard
200 Chart.

About Tyler Farr:“One of the best male vocalists in Country music today,” (Taste of Country), Tyler Farr is the first artistsigned to Jason Aldean’s Night Train Records/BBR Music Group. The Country-rocker, with three No.1 songs to his credit (“Redneck Crazy,” “Whiskey in My Water,” and “A Guy Walks Into a Bar”) broke onto the scene with the 2013 release of his debut album, Redneck Crazy, which landed at No. 2 on the Billboard Country Albums Chart and #5 on the Billboard Top 200.
Farr’s platinum-selling title-track “Redneck Crazy” projected Farr
forward to celebrate back-to-back No. 1 singles, including his first No.
1 as a songwriter, with his Platinum-certified hit “Whiskey in my
Water.” His sophomore album, Suffer In Peace followed suit, also making its debut in the Top 5 on both the BILLBOARD Top 200 Albums and BILLBOARD Country Albums Charts, leading Farr to become the only solo male Country artist in the past decade to have their first two studio albums debut in the Top 5 on the Billboard 200 Chart.

Recognized
as a 2014 CRS New Faces of Country Radio and 2014 Music Row
“Breakthrough Artist of the Year” nominee, the opera-trained singer
quickly earned coveted slots touring with Jason Aldean, Florida Georgia
Line, Brantley Gilbert, Luke Combs and Lee Brice. The Missouri native’s
dry wit, silly antics and reputation as “a no-frills musician who pours
his drinks as hard as he pours his heart into his songs,” (Rolling
Stone), lead to Farr to receiving hisown reality series A Little Too Farr (Unscripted) and a social following eager to see his next move.Farr
is currently working on new music with longtime friend, Jason Aldean
serving as a producer for the forthcoming project and his new single
“Only Truck in Town” is out on Country radio now, with his EP of the
same name will be released June 5.