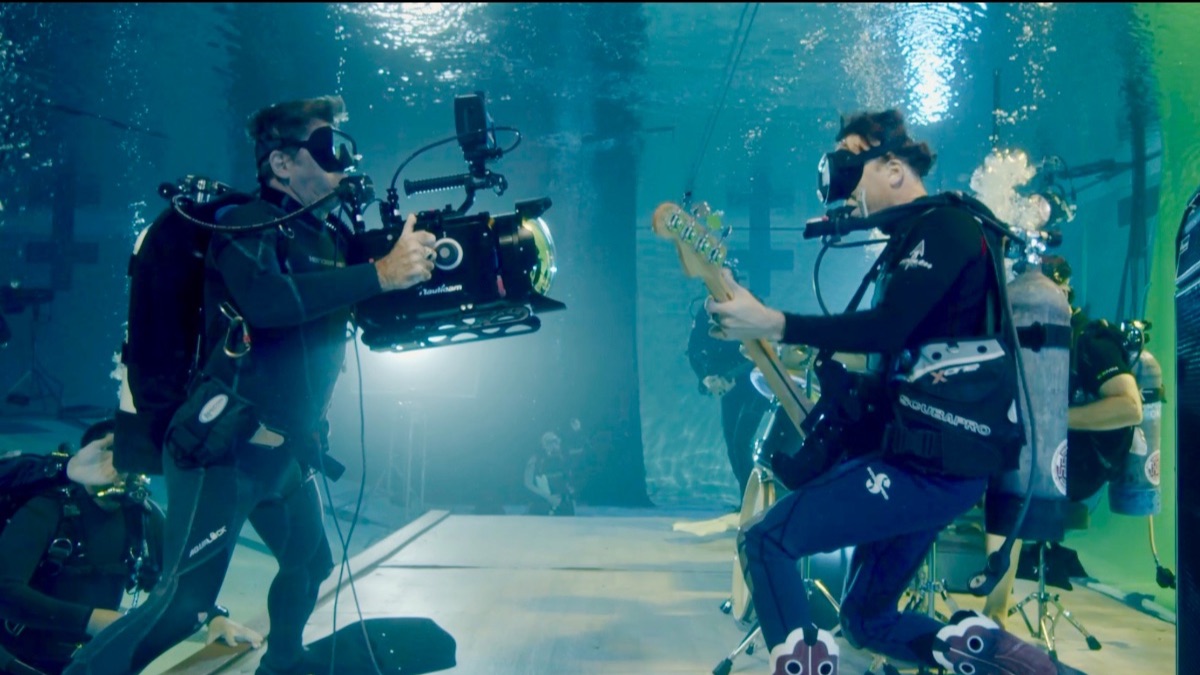 CMA “Entertainer Of The Year” Garth Brooks
is offering fans a look behind the scenes of his first music video in 12
years in a special broadcast of “The Making Of Dive Bar” set to
exclusively premiere on CMT on Saturday, January 18 at 12pm/11am CT, and will re-air on Sunday January, 19 at 12pm/11am CT.

Brooks co-directed the music video for his current Top 15 single with
Blake Shelton, “Dive Bar,” alongside Robert Deaton, teaming up to make a
one-of-a-kind concept. Brooks and Deaton share the process that went
into making the video, including Brooks’ band members taking scuba
diving lessons to bring the song to life and the meticulously shot
visuals throughout. Brooks’ collaborator on the track Blake Shelton also
features in the special, offering a humorous glimpse into the
atmosphere on set for the video that garnered over 30 million views in
five days.

“CMT Hot 20 Countdown” will also celebrate the broadcast premiere with a
special “Garth Weekend,” featuring over 3.5 hours of Garth-centric
programming for both of its weekend shows. “CMT Hot 20 Countdown: Garth
Weekend” will air at 9am ET/8am CT on Saturday, January 18 and Sunday,
January 19.

Brooks’ current single also sparked his DIVE BAR tour across the
country, where the only way in was to win tickets via country radio.
Brooks just announced he will extend the intimate tour into this year,
kicking off in Boston where some inclement weather prevented the
previously scheduled show from taking place and with more dates to be
announced in the near future.

Garth Brooks launched the monumental The Stadium Tour in March of 2019.
In the first ten stadiums announced, Brooks set massive ticket sale
records, with many shows selling out in minutes and breaking attendance
records. Brooks will continue the colossal tour in Detroit, MI at Ford
Field on Feb. 22, Charlotte, NC at Bank of America Stadium on May 2 and
Cincinnati, OH at Paul Brown Stadium on May 16.

Brooks has just made his catalog available on vinyl for the first time
with his specially-curated vinyl package, LEGACY. During the first
pre-sale, Brooks smashed records with 20,000 packages sold in under 18
hours, totaling 420,000 vinyl records. Forbes noted, “To put this in
context, The Beatles were the number-one vinyl artist in 2018 with
321,000 sales over 12 months.” Brooks also recently received
iHeartRadio’s inaugural Artist of the Decade Award at the iHeartRadio
Awards in Los Angeles.

CMA “Entertainer Of The Year” Garth Brooks has been awarded the honor
seven times by CMA Awards as well as six times by the ACM Awards, a
first for any artist. He is also the first artist in history to receive
seven Diamond awards for the now seven albums certified by the RIAA at
over 10 million album sales each and remains the #1-selling solo artist
in U.S. history certified by the RIAA with over 148 million album sales.
He has received every accolade the recording industry can bestow on an
artist including being inducted into the International Songwriters Hall
of Fame in New York, the Nashville Songwriters Hall of Fame, Country
Music Hall of Fame and most recently, the Musicians Hall of Fame.

Brooks also hosts his highly popular Inside Studio G, a weekly Facebook
Live series. It airs every Monday on Brooks’ Facebook page at 7:00 PM
EST. You can follow him at: https://www.facebook.com/GarthBrooks,
https://twitter.com/garthbrooks, http://instagram.com/garthbrooks. For
more information please visit www.garthbrooks.com.