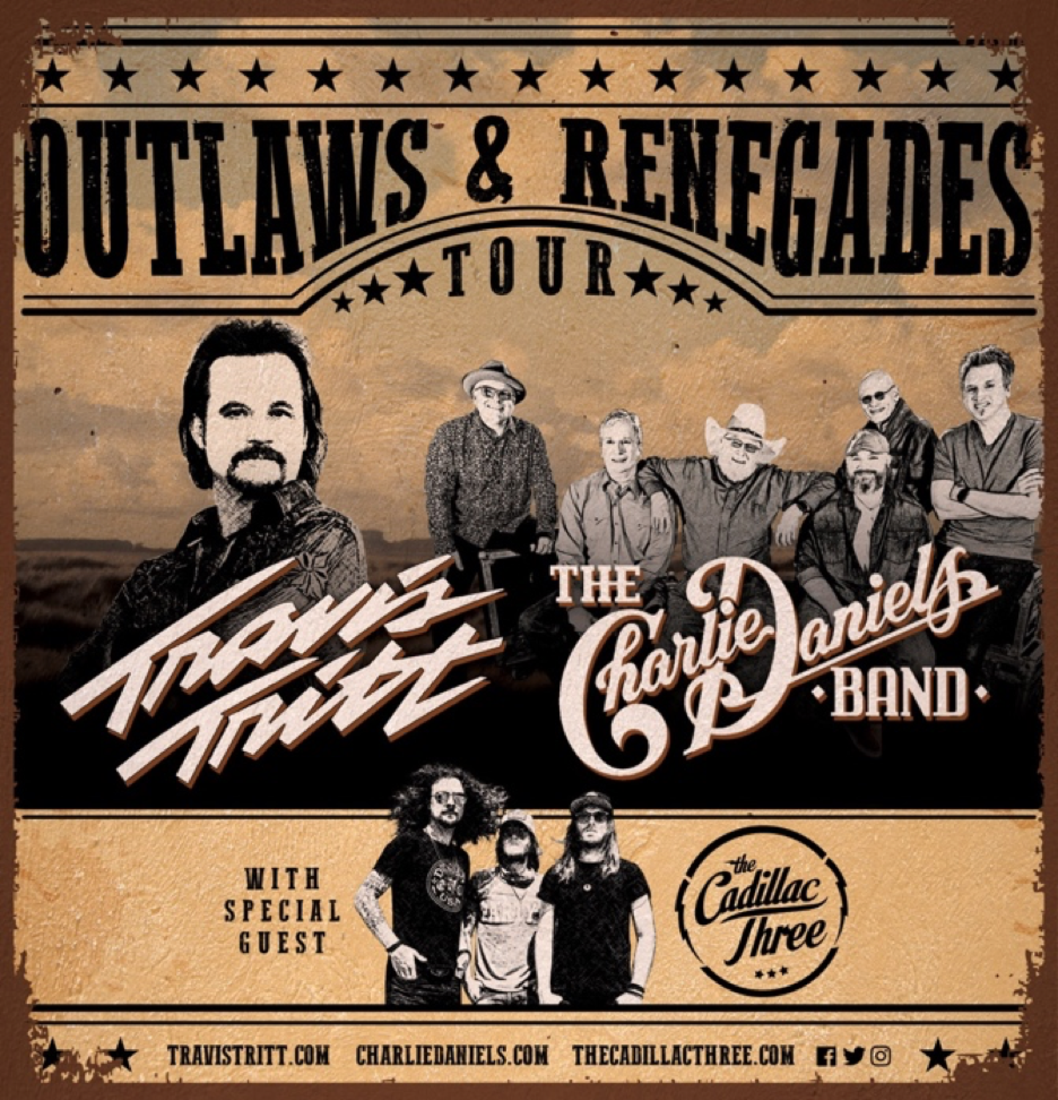 Travis Tritt and The Charlie Daniels Band are kicking off their 2019 Outlaws & Renegades tour with special guest The Cadillac Three. Supporting acts, The Marshall Tucker Band and Love & Theft, are also set to appear on select shows throughout the tour, which begins tonight, Friday, March 8 in St. Augustine, FL and runs through June 30, then picking back up Aug. 9-25.

The 2019 Outlaws & Renegades Tour Dates are as follows:

Additional details on shows and how to purchase tickets can be foundonwww.TravisTritt.comorwww.CharlieDaniels.com.

Three decades afterTravis Trittlaunched his music career, the Grammy award-winning artist continues to
sell out shows and stay true and relevant to Country music fans across
the globe. A Marietta, Ga. native, Travis Tritt is dubbed one of “The
Class of ‘89,” which included Country music superstars Garth Brooks,
Clint Black, and Alan Jackson; all of whom dominated the charts in the
early ‘90s.  Among his eleven studio albums and numerous charted singles
are nineteen Top 10 hits, including “Modern Day Bonnie and Clyde,”
“Here’s A Quarter” and “It’s A Great Day To Be Alive.” His career has
amassed over 30 million in album sales, two Grammy award wins and
multiple No. 1 singles on the Country radio charts. He is also a member
of the Grand Ole Opry.

From
his Dove Award-winning gospel albums to his genre-defining Southern
rock anthems and his CMA Award-winning country hits, few artists have
left a more indelible mark on America’s musical landscape thanCharlie Daniels. An
outspoken patriot, beloved mentor, and still a road warrior at age 82,
Daniels has parlayed his passion for music into a multi-platinum career
and a platform to support the military, underprivileged children, and
others in need. The Charlie Daniels Band has long populated radio with
memorable hits and his signature song, “The Devil Went Down to Georgia.”
Over the course of his career, Daniels has received numerous accolades,
including his induction into the Country Music Hall of Fame, the
Musicians Hall of Fame and becoming a member of the Grand Ole
Opry. Daniels helps to shine the spotlight on the many causes that are
close to his heart. He’s a staunch supporter of the military and lends
his time and talent to numerous charitable organizations, including The
Journey Home Project, that he founded in 2014 with his manager, David
Corlew, to help veterans of the United States Armed Forces.

For more information on The Charlie Daniels Band, visit thewebsite, and follow them onTwitter,Instagram, andFacebook.

Leaving a lasting impression on fans across the globe with their high-octane live show and chart-topping songwriting, The Cadillac Three continued to make their mark with LEGACY (Big Machine Records). Musical co-conspirators
Jaren Johnston (Guitar & Lead Vocals), Kelby Ray (Lap Steel Guitar)
and Neil Mason (Drums, Percussion & Vocals) create a sound
that hovers between radio-ready Country anthems and hard-and-heavy Rock
ballads that displays their instinctive sonic tendencies. Funneling
their chart-topping songwriting, amplified live show vibe, and
Southern-to-the-core sensibilities, the Nashville natives are sole
producers and musicians across the 11 tracks, aside from one song
featuring Lori McKenna. In addition to their own catalogue, the guys
have cuts for Tim McGraw, Rascal Flatts, Miranda Lambert, Steven Tyler
and more. GRAMMY®-nominated frontman Jaren picked up a CMA Triple Play
Award for chart-topping singles in a 12-month period: “Beachin’” (Jake
Owen), “Sunshine & Whiskey” (Frankie Ballard) and “Raise ‘Em Up”
(Keith Urban featuring Eric Church), which also earned him an ACM Award
nomination for Song of the Year. The 2014 UK Classic Rock Roll of Honour: Best New Band became the most played new band on Planet Rock in 2015 and were nominated for three Planet Rock Awards – The Rocks 2018 – for Best Live Band; Best International Album (Legacy) and Best International Band. Their
rabid fanbase has grown with their Record Store Day 2017 live session
at Abbey Road Studios, slots on Superstar tours, massive festival dates
and sold-out headline stops across Europe, plus playing to 40,000+ at
Download Festival and Ramblin’ Man Fair Main Stage. “Like Kings of Leon
before them, they’re poised for their first big break in the U.K. –
where they’ve sold out every headlining show for nearly two years –
before conquering their U.S. home turf,” heralded Rolling Stone. TC3 is currently on their COUNTRYFUZZ TOUR.

For more information about The Cadillac Three, visitwww.thecadillacthree.com, and for Love & Theft and Copper Chief, visitwww.loveandtheft.comandwww.copperchiefmusic.com.