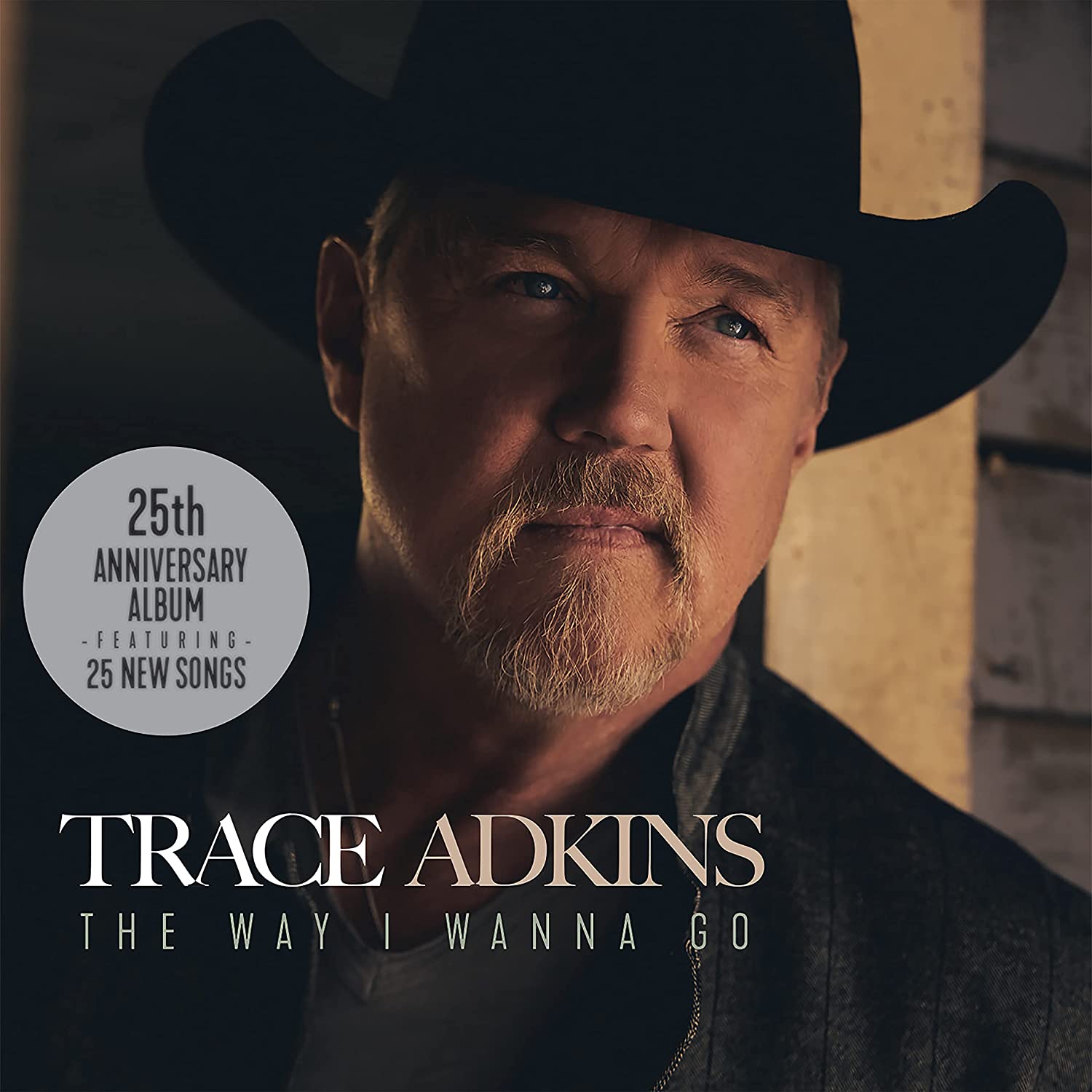 It’s Trace Adkins 25th Anniversary in Country Music. A 25 year career celebration with his 13th studio album, “The Way I Wanna Go” In 1996, Trace Adkins released his first debut album, “Dreamin’ Out Loud” which included 4 singles, one of which, “Every Light In The House” is still one of my favorites, and I even still have the cassette tape! Now 25 years later, Trace released his 13th studio album on August 2021, with Verge Records and produced by Mickey Jack Cones & Derek George “The Way I Wanna Go”, of 25 tracks, on a two disc set:

In his 25 year career in country music, Trace Adkins, has racked up multiple nominations and awards from ACM and CMT; sold over 11 million albums; has had over 2 billion streams, charted 30+ singles, and 14 Billboard Top 10 hit songs like: “There’s A Girl In Texas”, “Every Light In The House”, “The Rest Of Mine”, “This Ain’t No Thinkin’ Thing”, “Honky Tonk Badonkadonk”, “Ladies Love Country Boys”, “You’re Gonna Miss This” and many more! The Louisiana native is still going strong after 25 years of making music. He just celebrated his 60th birthday on January 13, 2022, and is still pushing the envelope with his new music, his acting career, and his newest rendition of a Hank Williams Jr. song from 40 years ago, “A Country Boy Can Survive”.

In addition to his music, Trace Adkins is an acclaimed actor who has appeared in such movies as, “The Lincoln Lawyer” and “I Can Only Imagine”. Adkins will also star in several movies: “Old Henry”; “Apache Johnson” which is to be released on on September 24th. The FOX TV series, MONARCH, which keeps getting pushed back to different dates… was due to be released last year, then again on January 30th this year, and now pushed back to Fall of ’22, where Adkins will star along with actress Susan Sarandon about the life and lifestyle of 1st “royal” family of Country Music. Also to be released to movie theaters everywhere on February 25th this year, Trace will star in a Lionsgate movie called, “Desparate Riders”, starring with DrewWaters, TomBerranger, country music artists T. Graham Brown and Kenny Lee.

In this, his 25th Anniversary album, Trace wanted to emulate Country music icon, Ronnie Milsap on his new album. Of Ronnie’s albums he said, “You never knew from one cut to the next what you were going to get. It might be something that sounds like, “Lost In The Fifties Tonight”, and then something he did with the Pointer Sisters, and then a straight up rock track, and then a cry-in-your-beer ballad. (These are) the kind of records that I’ve always wanted to make, and that’s what we did on this one”. “The Way I Wanna Go” shows just that: Trace’s wide open and full throttle approach to music diversity both in awesome lyrics and a wide variety of songs that cross into other genres….you never know what to expect, or what you’ll get in the next song down the track!

Most notable for me on this 25th Anniversary album are:

“Where The Country Girls At” featuring Pitbull and Luke Bryan as the rockin’, rappin’ “Summer party jam” song of 2021. “If I Was A Woman” featuring Blake Shelton is Trace’s witty and hilarious side of romance about what he and Blake think they would want in a man if they were a woman. “Careful Girl”…”or you’re gonna wind up in a song” struck a chord with me, as well as did his love songs to his wife, “Youre Mine” and “It All Adds Up To Us”. “Empty Chair” was written for the Wounded Warriors and honoring those in the Military who have lost their lives in the line of duty. “So Do The Neighbors” feat Snoop Dogg is a fun little diddy about crankin’ the tunes up, up so loud that even the neighbors have to join in with the head boppin’ music and thumpin’ vibes.

I really love this album, a lot! Other notable mentions from this album: “Love Walks Through The Rain” feat Melissa Etheridge, a duet that equally matches each other’s voices perfectly, and he says, “the best duet I’ve ever done so far”; “Honey Child”, a funny little song by Kerry Kurt; It’s A Good Thing I Dont Drink”; “Low Note”; “Jesus Was A Hippie”;  “Memory To Memphis” featuring Keb’ Mo’ & Stevie Wonder on the harmonica; and last, but not least, the title track, “The Way I Wanna Go” penned by Barry Dean Troy Verges and Brothers Osborne (John and T.J.) is a culmination of the artists entire life, and way of life these last 25 years in the music business. Trace says of the song, “It just killed me, and I thought, ‘Oh my God!’, those boys somehow got into my head and wrote this song. It says everything I want to say. ‘You can chisel this one on my tombstone!’ I’m gonna go out the way I way to go out. I’m going to finish this ride when I want to get off. It (the song) says everything I want to say—and that’s the reason it’s the title cut” on this album. “I’m gonna go out the way I wanna go out”…. isn’t that pretty much how most of us feel? Don’t we??

Congrats to you,Trace Adkins on your 25 years in the biz, and I do hope you had a wonderful and blessed 60th Birthday bash surrounded by your family and friends! Keep that awesome music of yours coming!