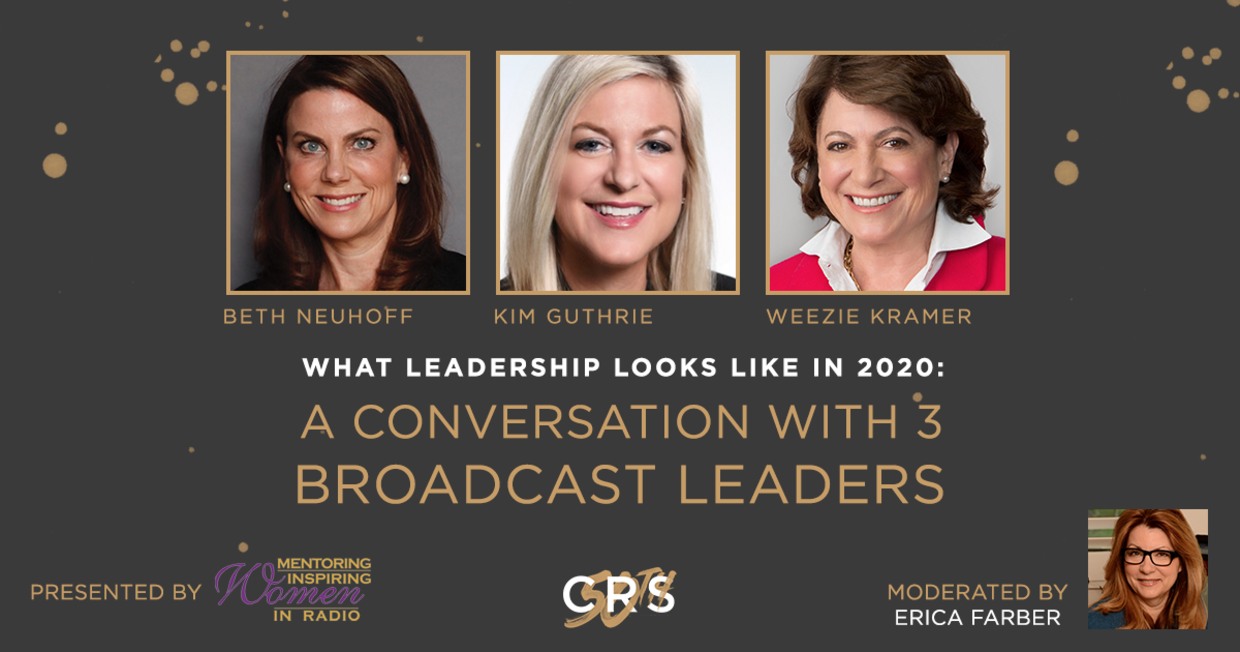 Three of radio’s most dynamic leaders are set to speak atCountry Radio Seminar’s 50th Anniversary event during a featured panel, entitled What Leadership Looks Like In 2020: A Conversation with 3 Broadcast Executives.  Presented by the Mentoring and Inspiring Women in Radio (MIW) Group, the panel features Cox Media Group President Kim Guthrie, Entercom Communications COO Weezie Kramer, and Neuhoff Media CEO/President Beth Neuhoff,
and will be held Friday, Feb. 15 from 9-9:50 a.m.  These accomplished
executives will share their views on the health of today’s broadcast
landscape and provide insights into how their companies are growing from
every angle using every asset: digital, on-air and human. Listen in as
they discuss lessons learned over their careers while moving up the
ranks and into the C-Suite.

About MIW Radio Group:
The Mentoring and Inspiring Women in Radio (MIW) Group is a volunteer
organization consisting of top-level female media professionals from
across the country, who are dedicated to using their influence and
resources to help other women in radio broadcasting develop strong
management and leadership skills. The MIW Group is equally committed to
advocating for the advancement of women to senior positions in radio
broadcasting. For more information, please visitwww.radioMIW.com.

About Kim Guthrie:Kim Guthrie is President ofCox Media Group(CMG), an integrated broadcasting, publishing and digital media company
and a subsidiary of Cox Enterprises, Inc., based in Atlanta, GA. As
President, Kim oversees all content, sales, and operations for 14
broadcast television stations; more than 60 radio stations; two daily
newspapers and more than 80 digital sites. Additionally, CMG operates
the National Advertising Platform businesses ofCoxReps– the country’s biggest television rep firm –Gamut, andVidea. CMG also offers a full suite of local and regional advertising services through its Local Solutions and Ideabar businesses.
Previously, Kim was Executive Vice President of National Ad Platforms
and President of CoxReps, based in New York City. Prior to that role,
Kim was Executive VP of Radio where she was responsible for all
programming, operations, and sales for CMG’s radio division. During her
Cox Media Group career, Kim has held the titles of Senior VP and Group
VP for CMG, overseeing multiple Cox television and radio properties.
Guthrie first joined Cox in 1998 as VP/General Manager for its Long
Island, New York group of radio stations. Guthrie’s stations have won
multiple honors for programming excellence and outstanding community
service including multiple Marconi awards, Edward R. Murrow awards,
Crystal Awards, Emmy Awards, Gracie Awards, New York Air Awards and
Country Music Association Awards. Kim serves on the executive board of
directors for the National Association of Broadcasters (NAB). She also
serves on the board of directors for the Broadcasters Foundation of
America, the National Association of Broadcasters Education Foundation
(NABEF), and the Metropolitan College of New York. Kim also serves on
the Advisory Council for the Greenlee School of Journalism at Iowa State
University. Kim is a multi-year honoree as Radio Ink magazine’s “Most
Powerful People in Radio” and “Most Influential Women in Radio.” She
also was named “Woman of Distinction” by the March of Dimes and
“Humanitarian of the Year” by the Muscular Dystrophy Association.

About Weezie Kramer:Weezie Kramer is the Chief Operating Officer of Entercom
Communications. In this role, she leads operations for Entercom’s entire
portfolio. Kramer joined Entercom in January 2000, as a regional vice
president, overseeing five markets. She has been instrumental in driving
the company’s growth and was elevated to her current role as COO in
2014. Kramer was a part of the executive team leading the company’s
merger in 2017. Prior to Entercom, Kramer held numerous sales and
leadership roles in the radio industry. Notably, she spent 12 years at
CBS Radio, where she rose to become a VP and a Market Manager. Kramer
serves on the executive committee of the Radio Advertising Bureau (RAB)
and was the first woman to chair the organization. She was also the
first woman to receive the Sales Manager of the Year Radio Wayne award, a
prestigious honor that recognizes the professionalism, creativity, and
dedication of radio industry leaders. In 2013, she won the “Mentoring
& Inspiring Women” in Radio Group’s Trailblazer Award and is
consistently named as one of Radio Ink’s “Top 20 Most Influential
People.”

About Beth Neuhoff:Beth Neuhoff is a CEO, corporate director and media, marketing and
consumer segmentation expert. Neuhoff is recognized for creating high
performing organizations and brand building strategies in both national
and local markets.  As Chief Executive Officer of Neuhoff
Communications, Ms. Neuhoff leads this award-winning, privately held
broadcast and digital media company with leading properties across the
Midwest. Neuhoff is a director for Gray Television (GTN/ NYSE) and the
West Bend Mutual Insurance Company. An elected Director of the National
Association of Broadcasters in Washington, D.C., she served two terms as
Second Vice Chair of the Executive Committee.  She is a Director of the
Broadcaster’s Foundation of America; a Trustee of the National
Association of Broadcaster’s Education Foundation (NABEF) and a Trustee
of the National Association of Broadcaster’s Political Action Committee
(NABPAC). She is a member of the (YPO), Women Corporate Directors (WCD),
the International Women’s Forum, and the Alliance for Women in Media.
She is a graduate of the NABEF’s Broadcast Leadership Class that works
in tandem with the FCC to encourage diversity of ownership in
broadcasting. For the last five years, she has been named as one of the
“Most Influential Women in Radio” by Radio Ink magazine and was
featured on the cover for this same issue in 2015.  At the 2014 and 2015
and 2017 Radio Shows, she was a finalist for “Best Broadcaster in
America”.  In 2016, she received the Illinois Broadcaster of the Year
from the Illinois Broadcaster’s Association and in September of 2016 was
recognized with the Frances Preston Trailblazer award in Nashville.  In
2018, she received the Gracie Leadership Award from the Alliance for
Women in Media.

About Country Radio Seminar: Country
Radio Seminar is an annual convention designed to educate and promote
the exchange of ideas and business practices in the Country music
industry, with specific emphasis on issues relevant to Country radio.
Country Radio Seminar 2019 is set for Feb. 13-15, 2019 at the Omni
Hotel.