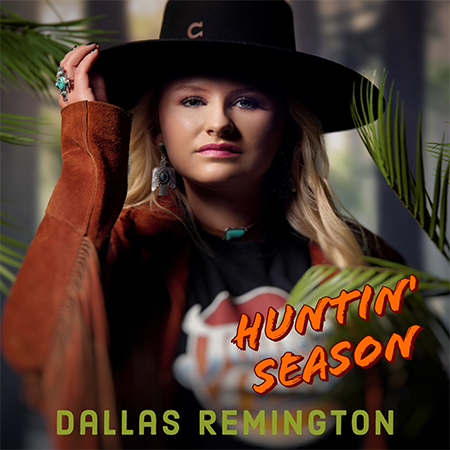 “Huntin’
Season” is a song about a broken heart that finds healing in an
unexpected twist of a new found skill,” stated Dallas Remington”That’s
the best thing you ever done for me!”

The
idea for the song originated when a friend told Dallas that his
ex-wife’s magazines subscriptions kept coming. With deep roots of family
traditions and a true country raising, one magazine that Dallas quickly
thought of was “Field & Stream.” Growing up she had seen it laying
on her dad’s bedside table and at dentist & doctors offices. With a
spark of imagination and creativity the four talented writers created
the lyrics to “Huntin’ Season” the next afternoon.  The lyrics and
production are both unique and surprising as it leads the listener on an
adventure of passion and the unexpected

Dallas Remingtonis a no-nonsense country recording artist and songwriter who knows who she is and what she wants. The Kentucky-born, nineteen-year-old thrives with a passion for life, her music, and her faith. Dallas’ vocal talents are marked by her striking lyrics and textured phrasing; her fiery verve and vigor comes to life in every performance–intimate or live. Her passion for playing the guitar and performing began at an early age, around nine years old, however she regularly plays a variety of instruments with guitar and bass as her primary focus. “Singing will always be a part of me. Whether I’m singing at church, on the street, on a flatbed trailer, or somewhere in Nashville, I love every minute.” she quips. A Dallas Remington performance includes a variety of songs, from her originals like “Found Her Freedom” (charted top 60 on MusicRow Breakout Chart), and “Never Turned Around”(charting #37 on the MusicRow Breakout Chart), and her most recent single to radio “Boy In A Band ” which climbed to #41 onMusicRow Breakout Chart, as well as a fewcovers of new country artists such as Miranda Lambert and Maren Morris. Dallas also loves to perform traditional country songs from artists such as Johnny Cash and Dolly Parton, as well as southern gospel and classic Rock. Dallas Remington’s talents have been recognized by the music industry by the Volunteer State Country Bluegrass Gospel Music Association who presented Dallas awards for Entertainer of the Year, Instrumentalist of the Year, Traditional Country Female Vocalist of the Year,  New Country Co-Songwriter of the Year for “Found Her Freedom” and “Never Turned Around” (2016), Traditional Country Co-Songwriter of the Year for “Here’s Your Trailer Key” (2017) and Traditional Country Songwriter of The Year for “I’m Country”(2016) and Female Instrumentalist of Year 2018 ages 18-21.