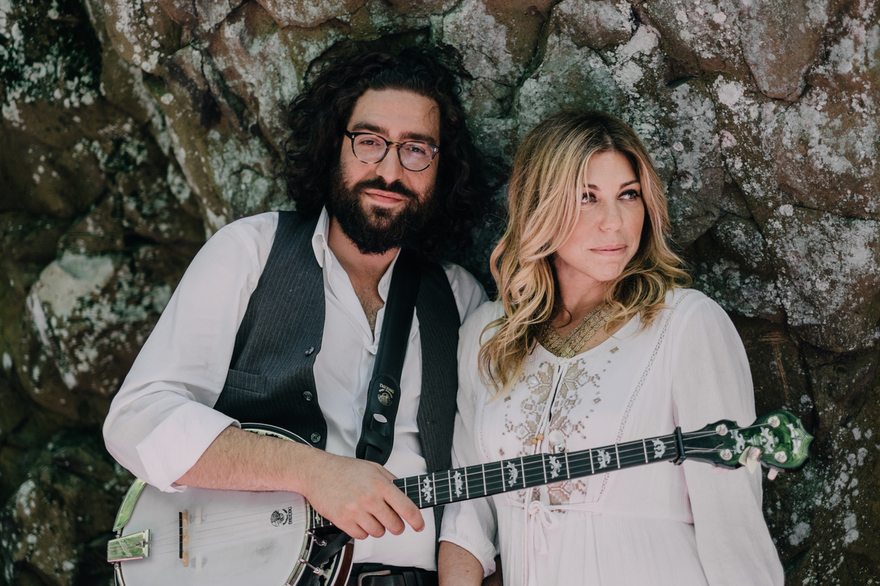 Nashville – March 2, 2018 –  “The
question is not, how do we get diversity into bluegrass, but how do we
get diversity back into bluegrass?” asked Rhiannon Giddons during her
keynote at the 2017 IBMA conference.  The answer is Nefesh Mountain.  Yes, Beneath The Open Sky is
a bluegrass album. Yes, some of its lyrics are sung in Hebrew. No, it
isn’t a gimmick or a parody. And, no, it’s not klezmer music.

That being said, let’s hear Beneath The Open Sky for what it
really is: a soulful, euphoric, folk-flavored outpouring of hope and
joy, propelled by the kind of crisp, crystalline picking that gives
lyrics wings. It’s a distinctively Nefesh Mountain sound.

Today, the husband and wife duo of Doni Zasloff and Eric Lindberg, release Beneath The Open Sky, their
second full length album and follow up to their critically-acclaimed
self-titled debut Nefesh Mountain. The recording was very much a
hands-on undertaking for the couple, writing or arranging all 11 songs,
as well as co-producing the entire project from start to finish. They
recorded it with the instrumental backing of Sam Bush, Jerry Douglas, Tony Trischka and David Grier, aided by Nefesh Mountain’s touring band members, Alan Grubner on fiddle and Tim Kiah on
bass.  A dazzling picker in his own right, Lindberg provides lead
guitar and banjo throughout, while Zasloff soars with some of the most
melodic, incisive and soul-stirring vocals we’ve heard since Mary
Travers first took the spotlight.

Using
original material, along with four tracks drawing from the folk and old
time traditions, Lindberg and Zasloff ingeniously create a beautiful
arc throughout Beneath The Open Sky which defines their own genre and world as they see it.Their
message is clear from the album’s opening track and rousing call for
universal equality “Bound For The Promised Land,” to the closing of
their haunting rendition of Irving Berlin’s “Russian Lullaby.”
Throughout these songs, you can hear the foundational similarities
between bluegrass and Jewish traditions, notably the lure of “home,” the
love of nature and the comforts of a like-minded community. Jerusalem
Ridge, Rocky Top, Flint Hill and Nefesh Mountain are clearly parts of
the same eternal chain.

Both
native New Yorkers, Lindberg and Zasloff have long and strong ties to
bluegrass. “I grew up in Brooklyn,” says Lindberg, “but my dad’s side of
the family, which was not Jewish—he converted when he married my
mother—lived in rural Georgia. I would go down and hang out with my
uncles, who were great guitar players. We’d hike the Appalachian Trail
and listen to old-time music. Something in my soul always responded to
this deep, ancient, and undeniable feeling that I had from being down
South in this heartland of America.”

“We
want to have a chance to share our story with everybody,” Zasloff adds.
“There is this word ‘Americana’ that we all know well and is used a lot
these days, bridging the gaps somewhere between Old-Time, Bluegrass,
Folk, Blues and Jazz which all have deep roots in this country. For me,
the beauty of all of these forms of music is that at their core they are
about people, they are about this amazing world, and they are about
life. That is where we are coming from with Nefesh Mountain; somewhere
in the long chain of music and ideology that gives us the opportunity to
open people’s minds and hearts to our culture and heritage. We’re all
in the same boat here. We’re all trying to figure it out.”