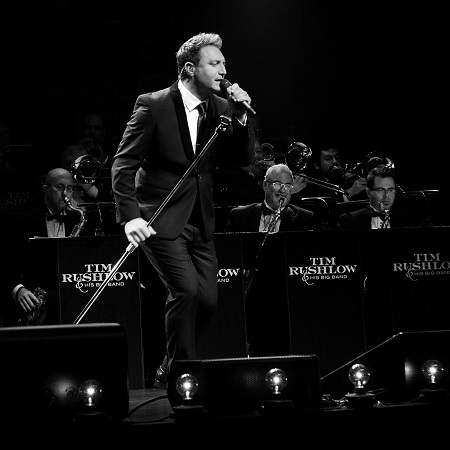 Tim Rushlow & His Big Band — LIVE, recorded at The
Rosewall in downtown Nashville, Tenn., proves Rushlow has reinvented
himself as a curator of the Great American Songbook. Rushlow pursues a
lifelong dream as he puts his spin on timeless, authentic classics by
Bobby Darin, Frank Sinatra, Dean Martin, Elvis, Buddy Holly and more.

“Tim Rushlow is a genuine and rare talent who is able to
authentically cross over musical genres. My father, the late Bobby
Darin, was able to do that as well and it’s just fantastic to see Tim
interpret some of my father’s songs,” said Dodd Mitchell Darin. “It will
be exciting to see where his talents lead him. I’ll be watching as I
know it’s going to be great. I wish Tim all the best!”

Following the successful 2014 release of Rushlow’s big band Classic Christmas
album, which rose well into the top 20 on Billboard’s Holiday Albums
chart, the passionate showman began plotting his next move to show his
admiration for the jazz industry. The product is Tim Rushlow & His Big Band — LIVE, which has already been picked up by American Public Television as a national pledge drive for 2016 and 2017.

Tim Rushlow & His Big Band — LIVE has premiered on
public television in markets like St. Louis (KETC), Atlanta (WPBA),
Mississippi (WMPB) and Nashville (WNPT), the latter of which led to two
back-to-back sold out shows at The Franklin Theatre this past December.
Additional markets and air dates for the show will be announced. Check
local listings for updates.

To keep up with Tim Rushlow and see him alongside his 18-piece big band live in concert, visit www.TimRushlow.com. Watch the preview of Tim Rushlow & His Big Band — LIVE on YouTube and follow him on Facebook and Twitter.

ABOUT TIM RUSHLOW:
A versatile entertainer who sold millions of records during his time
as lead singer of country music super group Little Texas, Tim Rushlow is
a master song interpreter with a deep, abiding love for the classics.
During the band’s impressive run in the ’90’s, he and the rest of the
Little Texas members charted over a dozen hits including “God Blessed
Texas,” “What Might Have Been,” and the number one smash “My Love.”
Following the band’s breakup, Tim embarked upon a solo career with
Atlantic Records and released a self-titled CD that yielded the
heartwarming Top Ten hit “She Misses Him,” about a couple’s touching
battle with Alzheimer’s. Following a few more endeavors in musical
groups and pairings, in 2009 Tim decided to refocus his energies on
honing his performing skills as a solo act, launching a well-received
acoustic tour at smaller listening rooms around the country. The
challenge of engaging audiences and laying his emotions bare on the
stage in front of intimate crowds night after night fired up Tim’s
creativity to a new level and renewed his love for the classic sounds he
grew up listening to and first cut his musical teeth on like Bobby
Darin, Frank Sinatra, Perry Como, Dean Martin, and Andy Williams. And
the experience soon inspired him to take his career in a whole new
direction as the modern-day crooner he had always envisioned himself to
be.