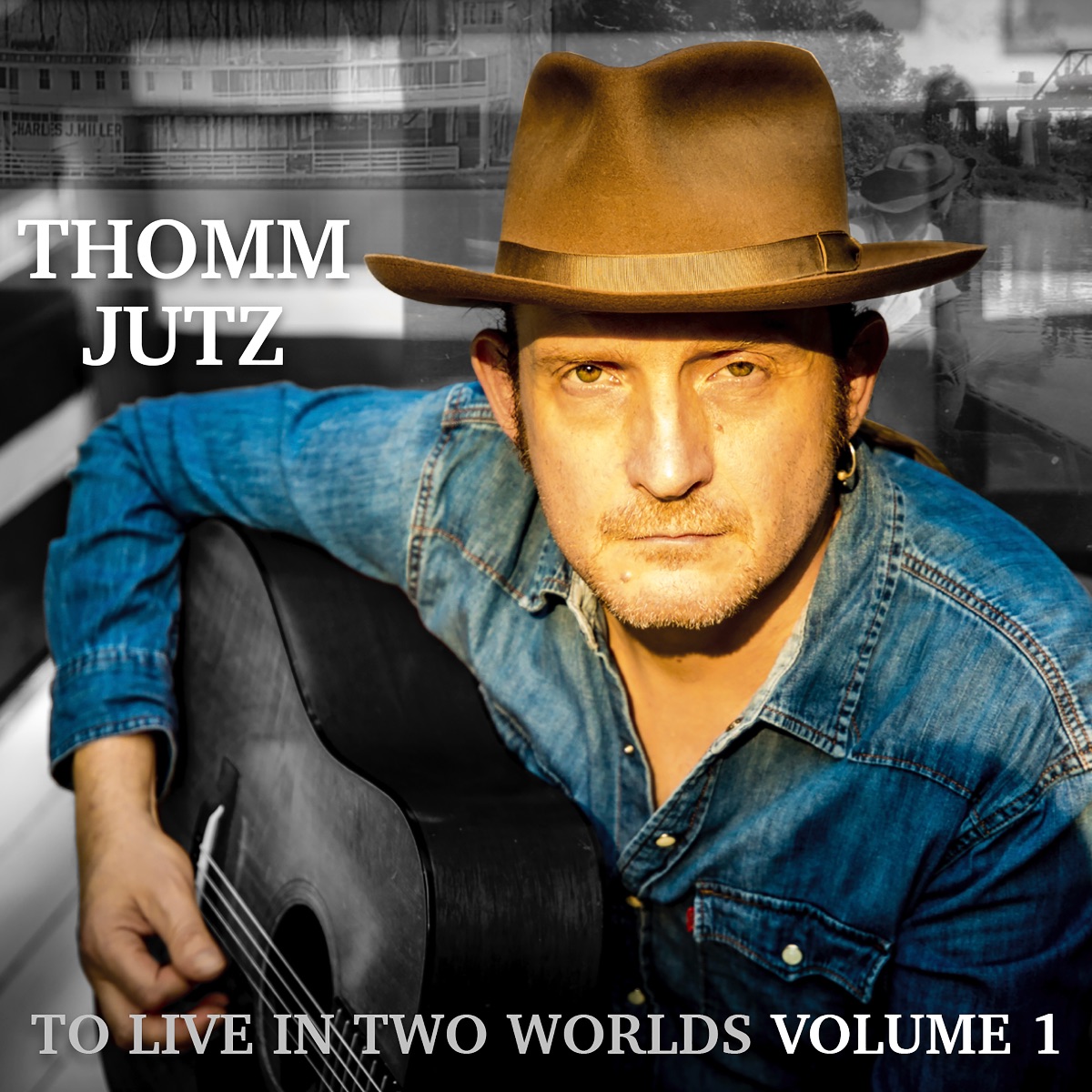 Thomm Jutz uses
his perceptive and intelligent songwriting to tell vivid, historical
tales from the American Southland on a large body of collected songs
titled To Live In Two Worlds. The first of two volumes from Jutz and Mountain Home Music Company is now available everywhere.

Jutz, born abroad, has always found his soul belonging
to the American South. Here he spins stories of rambling vagabond
musicians, the hard life of mill workers, tragic Civil War characters
both real and imagined, semi-forgotten regional legends and new stories
of more recent real-life dramas and tragedies that will be tomorrow’s
parables.

To Live In Two Worlds is unique in that it showcases Jutz’s diverse
talents. “I wanted to make another bluegrass record but I also wanted
to make a ‘true’ solo record, with just me singing and playing. So I did
both,” Jutz said. “The players on these records are my
dream team, and I love how the band and solo tracks correspond on these
two volumes. From a songwriter’s perspective I feel that this is my
best work yet. I’ve found my place with ‘one foot in a different world
and one foot here today.’”

“Mill Town Blues” — one of the album’s first singles — is an up-tempo story of early country music pioneer Charlie Poole and his band roaring through the Carolinas and earned Jutz national radio success with the song’s consistent top-20 Bluegrass charting. Other characters from the golden age of early roots music appear throughout the collection. The Father of Country Music gets a simpatico biographical sketch in “Jimmie Rodgers Rode A Train,” while “I Long to Hear Them Testify” celebrates the lives of country blues troubadours Blind Willie McTell and Skip James. Still more Depression-era figures like Blind Alfred Reed are acknowledged in the song that borrows his name for its title, and “Hartford’s Bend” honors the more contemporary, yet supremely nostalgic river boat captain and bluegrass pioneer, John Hartford.

Other
selections give meaningful tellings of tragic and inspiring adventures
in southern Appalachia, like the historic conflict of “Shelton Laurel Valley” that left a community scarred from the injuries of the Civil War, and “Where the Bluebirds Call,” which envisions the journey of song collector Cecil Sharp.

The legendary Tom T. Hall has said about Jutz,
“For years I have hoped that some young man would get off the bus in
Nashville with a guitar wrapped in a cellophane dry cleaning bag and
bring something new and exciting to the music scene. I know that
songwriters and singers don’t ride buses anymore unless they own them.
As an old songwriter myself, I am pleased that one of my wishes has come
true. Thomm Jutz is in town and the town is all the better for it.”

Thomm Jutz is a songwriter, producer and guitar player whose songs have
been recorded by Balsam Range, Chris Jones & The Night Drivers,
Terry Baucom, Nanci Griffith, Kim Richey and many more. To date he has
had six #1 bluegrass songs and was nominated for IBMA Songwriter Of The
Year in 2017 and 2018. His song “Going Back To Bristol” was nominated
for Song Of The Year 2017. He’s the producer and principal songwriter of
The 1861 Project, a three-record collection of original songs about the
American Civil War. He also co-wrote and produced I Sang The Song, a
musical biography of Mac Wiseman featuring John Prine, Alison Krauss,
Shawn Camp and many other renowned Bluegrass artists. Jutz has
previously released two Bluegrass solo records Volunteer Trail and Crazy
If You Let It.