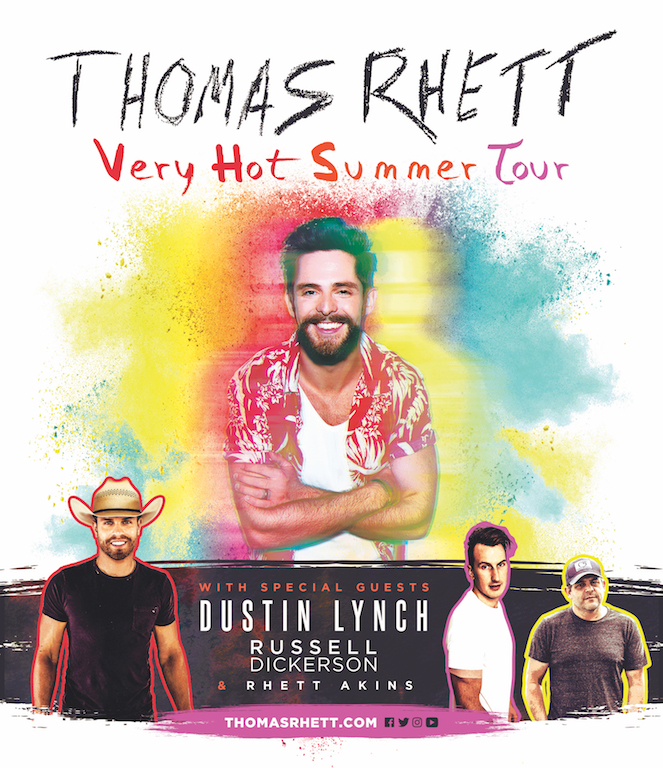 Nashville, TN – MULTI-platinum selling performer Thomas Rhett announced today his VERY HOT SUMMER TOUR
with special guests Dustin Lynch, Russell Dickerson and Rhett Akins.
Thomas Rhett is set to kick off the summer on May 17 in Spokane,
WA. Touted as a “Born Entertainer” (Lincoln Journal Star), fans can’t help but “get swept up in the fun” (Lexington Herald Leader) of Thomas Rhett’s live show. Initial public on-sales are scheduled for Nov. 30 beginning at 10:00am local time via thomasrhett.com.
Fans can also purchase tickets for additional select cities beginning
Friday, January 25 as part of Live Nation’s Country Megaticket at www.Megaticket.com,
and additional dates will continue to roll out over the coming weeks.
Citi is the official presale credit card of the  tour and Citi
cardmembers will have access to purchase presale tickets beginning
Tuesday at  10AM  local time through Citi’s Private Pass program. For
complete presale details, visit  www.citiprivatepass.com. Live Nation is the national tour promoter.

“We
literally just closed out our 2018 tour in the U.K. last week and I’m
already thinking about next year’s tour,” said Thomas Rhett. “I’m glad
we have the winter to plan and come up with some crazy stuff for next
year because I can’t think of a better way to spend the summer than out
on the road with my fans. And, I get to bring my dad and two of my
favorite artists in country music along for the ride.”

“A skilled musician and showman” (Providence Journal), Thomas Rhett’s live show continues to draw praise as he’s “fearlessly come into his own” (Tennessean). “Adept at engaging a crowd” (Houston Chronicle), “there’s a palpable connection between the country music superstar and his fans” (M-LIVE). The VERY HOT SUMMER TOUR will make notable stops across the US and wraps in his hometown of Nashville, TN.

Thomas
Rhett’s PLATINUM-certified third album LIFE CHANGES (The Valory Music
Co.) is the biggest, boldest-sounding record of his career, filled with a
diverse batch of songs as he stretches his sound to new limits.
Emphasizing his “detailed style of songwriting” (Rolling Stone),
LIFE CHANGES was an instant hit upon its release, debuting at No. One
on the all-genre Billboard 200 chart, marking the first Country release
to take the top spot last year. It also drew a 2018 GRAMMY nomination
for Best Country Album and
has been streamed more than 944 million times, delivering a slew of
RIAA-certified PLATINUM and GOLD chart-toppers, bringing Thomas Rhett’s
No. one tally to 11. His current single “Sixteen” is top 15 and rising
at Country radio. Thomas Rhett was named iHeartRadio’s Country Artist of the Year for
the second year in a row, following a CMA Triple Play award for penning
three No. One songs within a 12-month period (“Die A Happy Man,” “Star
of the Show” and Michael Ray’s “Think A Little Less”), adding to his
collection of trophies from the Country Music Association, Academy of
Country Music, Billboard Music Awards, CMT Music Awards and more. Thomas
Rhett is set to bring his critically-acclaimed LIFE CHANGES TOUR to Canada in April of 2019.

Since
releasing his PLATINUM-certified debut single, “Cowboys and Angels,”
Lynch has “steadily built one of the most consistent recording careers
in modern country music” (Billboard) with
five consecutive #1s, three Top 5 albums, PLATINUM-level certifications
and tours with the genre’s biggest names (Luke Bryan, Florida Gerogia
Line, and Brad Paisley). Racking up over 238 million views on
YouTube/VEVO, scoring one billion streams and selling 4.5 million
digital tracks, the newest member of the Grand Ole Opry is currently
climbing the Country charts with his single “Good Girl.”

Platinum
singer/songwriter, Russell Dickerson, celebrates a landmark year with
two consecutive No. 1 singles as Billboard’s No.1 Emerging Artist, a
Spotify RISE artist and CMT’s 18 for 2018. The 2018 CMT and ACM nominee
was named People Magazine’s “One to Watch,” and spends much time on the
road and with his fans who made his debut single “Yours” the biggest
love song of the year. His second single, “Blue Tacoma,” went #1 with
over 60M worldwide streams, and still popular on country radio.

Rhett Akins first album, A Thousand Memories produced
four chart singles with its 1995 release including his co-written first
No. one, “That Ain’t My Truck.” Moving on to release Somebody New the
following year and producing another No. one hit, “Don’t Get Me
Started.” Rhett as a songwriter has had 29 No. one singles (and
counting). Some of which include No. one hits by artists which include
Jason Aldean, Luke Bryan, Dustin Lynch, Jon Pardi, Thomas Rhett, and
Blake Shelton. Thomas Rhett’s “Star Of The Show,” co-written with Rhett
and Thomas Rhett pinned their first No. one together and in 2017, Rhett
celebrated his 29th number one as as a songwriter with Thomas Rhett’s
“Life Changes.” Rhett was named the No. 4 Billboard Country Songwriter,
awarded the CMA Triple Play seven times and awarded Songwriter of the
Year by the Academy of Country Music in 2018.