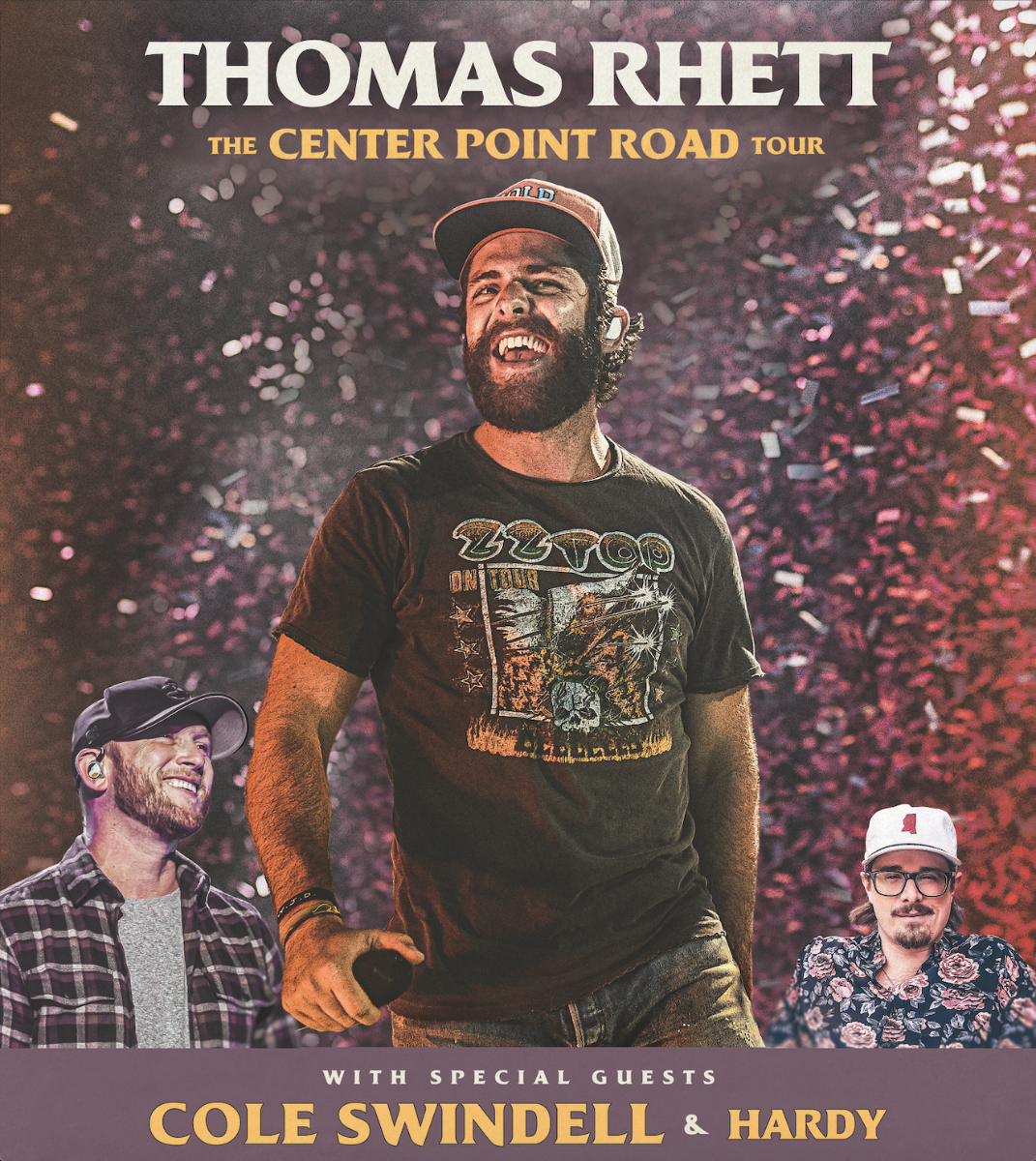 *Dates do not include Cole Swindell

Just months since Thomas Rhett, “at the top of his musical game,” (Winnipeg Free Press) earned
his second consecutive No. One on the Billboard 200 Albums Chart in
less than two years with CENTER POINT ROAD, which also broke streaming
records upon release, the album continues to earn accolades and
widespread critical praise. Thomas Rhett co-produced and co-wrote all 16
songs on the “expansive record” (Associated Press) as he’s “comfortably grown into a star with something to say” (Billboard), notching a GRAMMY nomination for Best Country Album as well being honored as a CMT Artist of the Year and earning multiple CMA, AMA, CMT, People’s Choice, and Teen Choice Award nominations throughout the year.

Rounding out the year, the 13x chart-topper returned to The Late Show with Stephen Colbert last night (12/11). Watch his performance of “Notice” here. Additionally, Thomas Rhett was part of the prestigious 2019 Kennedy Center Honors in Washington D.C. where he paid tribute to Sesame Street, which is set to air on CBS Dec. 15 at 8/7 p.m. CT. His full performance on the iconic show will premiere in 2020 on HBO.

CENTER POINT ROAD is a return to Thomas Rhett’s roots and connects fans
to his past, weaving together autobiographical stories with familiar
sounds that have propelled his meteoric career. The album’s PLATINUM
lead single, “Look What God Gave Her” was first introduced on SNL and
soared to No. One, following a slew of RIAA-certified PLATINUM and GOLD
chart-toppers, bringing Thomas Rhett’s No. One tally at Country radio to
13 as his “emotional epic” (Billboard)
current Top 5 single “Remember You Young” continues its fast climb at
radio. Thomas Rhett was named Country radio’s most played artist of
2018, following a CMA Triple Play award for penning three No. One songs
within a 12-month period, adding to his collection of trophies from the
Country Music Association, Academy of Country Music, Billboard Music
Awards, CMT Music Awards and more. For more information on new music and
upcoming tour dates, visit ThomasRhett.com.

In the five years since the release of his debut album on Warner Music
Nashville, Swindell has toured with the biggest superstars in Country
music including Luke Bryan, Kenny Chesney, Jason Aldean, Florida Georgia
Line, Dierks Bentley and officially became a headliner on his own Reason To Drink Tours in 2018. Swindell has sold out all four of his Down Home Tours in support of the Down Home Sessions I, II, III, IV. He kicks off his headlining Down To Earth Tour in
March 2020. The GRAMMY-nominated recording artist has racked up an
impressive and incomparable record-breaking NINE No. 1 singles (the only
solo artist in the history of the Country Aircheck/Mediabase to top the charts with first seven singles); 11 No. 1 singles as a songwriter; one 1 billion+ audience
reaching single (“You Should Be Here”), eight Platinum singles;
a Platinum-certified debut album; a Gold-certified sophomore album and
over 1 BILLION on demand streams as well as numerous songwriting honors
including being the NSAI Songwriter/Artist of the Year (2016), winning
two CMA Triple Play Awards in both 2015 (as the only performer to claim the title) and
again in 2016 (for penning three No. 1 songs in a 12 month span)
and Music Row’s Breakthrough Songwriter of the Year during his debut
(2015) with celebrated songwriting credits.

Big Loud Records/Tree Vibez Music HARDY continues to put his
loud-and-rowdy stamp on modern Country music as both an artist and
a CMA-nominated songwriter (Song of the Year – Blake Shelton’s “God’s Country”). Releasing HIXTAPE VOL. 1,
with 17 all-star collaborations (Keith Urban, Thomas Rhett, Dustin
Lynch) on 10 brand new tracks, the unprecedented compilation album has
been praised as “one of the most ambitious projects of the year” (Billboard). The countrified mixtape follows career-launching EPs THIS OLE BOY and WHERE TO FIND ME,
which produced Top 25 debut single “REDNECKER,” the down South, swampy
anthem that defines his brand of Country. The pride of Philadelphia, MS,
has been highlighted as a member of CMT’s 2019 Listen Up class,
a Vevo DSCVR artist, a MusicRow 2020 Next Big Thing artist and “One To
Watch” by Rolling Stone, Amazon, Pandora and more. As a songwriter, HARDY is “one of Music Row’s most consistent hit-makers on the rise” (CMT),
tallying four #1 singles in the last 18 months – Morgan Wallen’s
PLATINUM “Up Down” (feat. Florida Georgia Line), FGL’s 2X PLATINUM
“Simple,” Chris Lane’s GOLD “I Don’t Know About You” and
Shelton’s PLATINUM “God’s Country.” HARDY will join Cole Swindell’s DOWN
TO EARTH TOUR in March 2020, after completing his first-ever headlining
run on SiriusXM’s THE HIGHWAY FINDS TOUR.