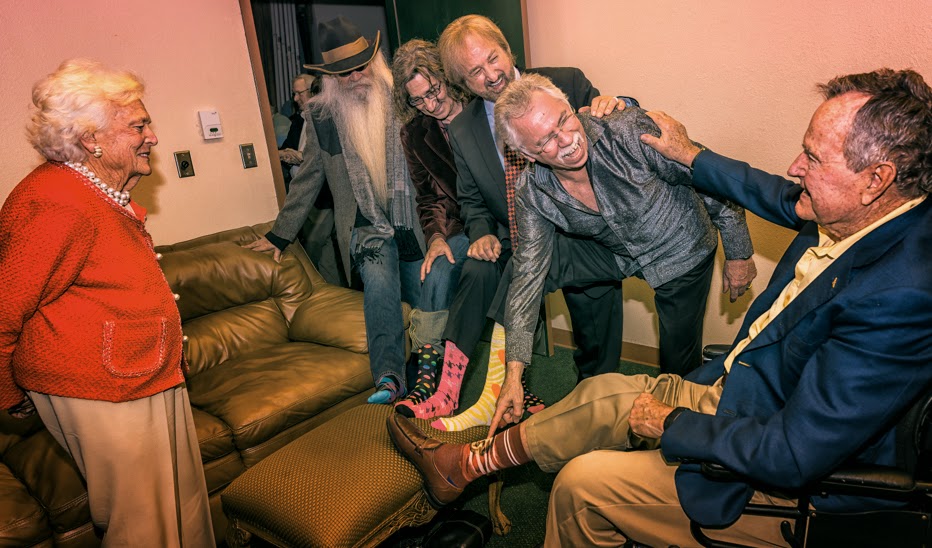 NASHVILLE,
Tenn. (March 28, 2014) – With a legacy that stretches across 6 decades,
encompasses more than 40 million albums sold, and includes numerous
iconic hit singles such as “Elvira,” “American Made,” and “Y’all Come
Back Saloon,” it’s no wonder that The Oak Ridge Boys are a favorite of
President George H.W. Bush. 2014 marks the 41st anniversary of the Oak
Ridge Boys—who better to celebrate with than the 41st President of the
United States?

Earlier this year Duane, Joe, William Lee, and Richard – known as The
Oak Ridge Boys – spent some time with former President “41” Bush and
Barbara Bush before their show in Galveston, Texas. The ‘Boys knew ahead
of time that the former President would be in attendance, so they wore
brightly-colored socks in his honor. After the show, President Bush came
backstage where The Oaks revealed their fashionable stockings to him.
The 41st President, and vibrant sock-wearing advocate, was thrilled to
see the group following the trend he started. Photos of the
picture-perfect moment will appear in the April issue of People Country available in stores today.

Reminiscing about the first time they performed for then-VP Bush on
the lawns of the White House in 1983, the Oaks’ Joe Bonsall said, “I
remember he specifically asked for “Freckles” off the Saloon album, and
that just blew us away. After he became president we sang for him many,
many times, and we still sing for him today. In fact when he and Barbara
came to see us just a few weeks ago in Galveston, Texas, we had “An
American Family” ready for him. That song has always been a favorite of
his.”

The Oak Ridge Boys are not only celebrating 41 years together, but
are also preparing to release their first-ever LIVE album. Cleopatra
Records will release Boys Night Out
on April 15th, in three formats – CD, vinyl, and digital download –
finally giving ORB fans the experience of the group’s well-polished live
performance for them to enjoy anytime, anywhere.

To be sure, Oak Ridge Boys fans have been clamoring for a live album
of hits for several years now, but as the band explained, “For some
reason or another, the time never seemed right.” Then, in early 2013,
lead vocalist and producer Duane Allen saw the stars align as the band
was able to get its hands on some top quality remote recording
equipment, and promptly began capturing performances of their current
show dubbed “Boys Night Out.” Night after night, The Oak Ridge Boys
wowed audiences across the nation with a setlist that packed all of the
group’s hit singles and fan favorites into one magnificent celebration.
Years of preparation have made such well-loved songs as “You’re The
One,” “Thank God For Kids,” and the brilliant “Bobbie Sue” sound even
more exhilarating than when they were originally recorded! It might not
be quite the same as being there, but it’s thrillingly close!