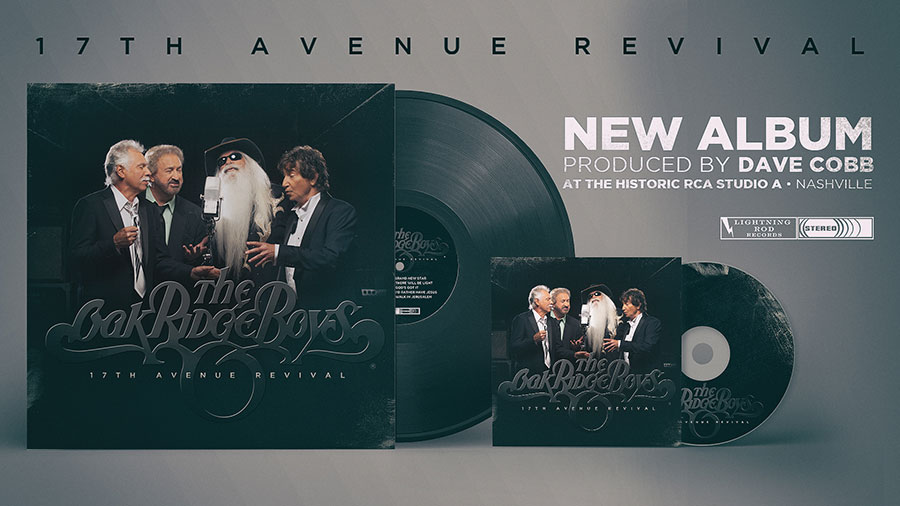 “Having been in The Oak Ridge Boys for almost 52 years,” says Duane
Allen, “it can be difficult for me to imagine a place where we have not
been. However, Dave Cobb had that vision, and the result is 17th Avenue
Revival.”

For the new project, Cobb’s vision for the group was to dig way back
into their roots of gospel music. But a different kind of gospel. One
that took a hard look at the early days of rock and roll, which was
influenced by spiritual, or black gospel.

Under Cobb’s direction, they touched on uncharted territory—and for a
long-tenured act like The Oak Ridge Boys, that’s saying something.
Somewhat retro, yet new and fresh at the same time, there was no vocal
stacking and very few overdubs. For two of the songs, the Boys gathered
around one microphone and let the harmonies shine, just as Dave Cobb had
planned initially.

“Legendary Studio A on 17th Avenue South became a special, almost
spiritual place, and for a few weeks it served as a beacon of
creativity,” says Allen. The result is a recording that will go down in
history, for old and new fans alike.

“Dave brought music with spirit and a magical feel to the studio. It
became a mental, emotional, physical and spiritual revival for The Oak
Ridge Boys,” says the groups’ William Lee Golden.

“17th Avenue Revival is something we believe our fans will love,” adds bass singer Richard Sterban.

Paste debuts “Brand New Star,”
one of the songs from the new album, which is already receiving
accolades from fans at the Oaks’ shows and is available as an instant
grat track when the album is downloaded on digital platforms including
Amazon Music and iTunes.

In 2018, The Oak Ridge Boys embark on their Shine the Light Tour,
reflecting the messages of this unique collection of songs, as well as
their all-time greatest hits. New roads, time-worn pathways, harmony,
friendship, inspiration, and GREAT MUSIC.

2. There Will Be Light (Jamey Johnson, Larry Shell & Buddy Cannon)

6. Where He Leads Me I Will Follow (Ernest W. Blandy / Public Domain)

9. Let It Shine On Me (Vince Gill & Ashley Monroe)

About The Oak Ridge Boys:

The Oak Ridge Boys, who have sold over 41 million units worldwide, are
synonymous with “America, apple pie, baseball, pop, rock, gospel and
country music.” In addition to their awards and accolades in the country
and pop music fields, they have garnered five GRAMMY® Awards and nine
GMA DOVE Awards as well as the Mainstream Artist of the Year Award at
the ICM Awards. The group—Joe Bonsall, Duane Allen, William Lee Golden,
and Richard Sterban—have earned prestigious membership in the Country
Music Hall of Fame (2015 Inductees) and Grand Ole Opry, and are known
worldwide as one of recording history’s most extraordinary musical
successes. They have charted single after single and album after album,
celebrating two double-platinum albums and more than 30 Top 10 hits,
including No. 1 chart-toppers “Elvira,” “Bobbie Sue,” “Thank God For
Kids,” “American Made,” “Y’All Come Back Saloon,” among dozens more. For
more information and to view upcoming tour dates for The Oak Ridge
Boys, please visit oakridgeboys.com.

Thirty Tigers is a music marketing, management, distribution, and
publishing company based in Nashville, Tennessee. Thirty Tigers
Distribution has served as a label infrastructure for a vast client base
including The Avett Brothers, Jason Isbell, Sturgill Simpson, Chase
Rice, Lucinda Williams, Ryan Bingham, Patty Griffin, St. Paul and The
Broken Bones, Trampled By Turtles, and many others in their 15 years of
working with Sony/RED Distribution, now The Orchard.