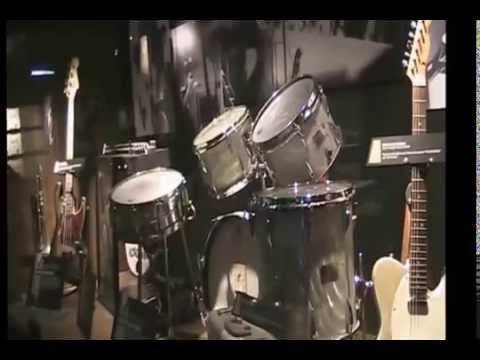 The Musicians Hall of Fame & Museum was created by Founder/CEO Joe Chambers to celebrate the musicians who played the instruments that supplied the soundtrack of our lives.  All genres of music are represented in the Museum.  The goal of Joe Chambers is to shine a light on the musicians that rarely get the attention that the singer or the front person of a band receives.  The players that spend their time in studios and rehearsal spaces and sometimes don’t even get listed on the liner notes for their contributions to an album are exactly why this museum was started.

Being a songwriter in Nashville in the late seventies, Chambers got to see just how a record could go all of the way from an idea on a piece of paper, to a recording on a tape in a studio, to a piece of plastic that could be broadcast over the airwaves and then, ultimately, sold to people all over the world.  Johnny Paycheck, George Jones, Conway Twitty, Ricky Van Shelton, and Randy Travis all cut songs written by Joe Chambers.  These are all familiar names if you are a country music fan.  But Joe was able to see behind the scenes when his songs were being cut by some of the best musicians in the world.  The Nashville A-Team was a revolving group of pickers that moved from studio to studio and would lay down tracks for the artists to sing over.

Steel guitarist Pete Drake was a real inspiration to Joe Chambers when the museum was just an idea in his mind.  Pete, along with the Nashville A-Team players like Bob Moore, Grady Martin, and Floyd Cramer, had released records under his own name as well as being an in-demand studio session player.  His contributions to recordings by Johnny Cash, Dolly Parton, Jerry Lee Lewis, Reba McEntire, Bobby Bare, Marty Robbins, and Charley Pride were a big part of The Nashville Sound that was taking over the airwaves.  Some of his most iconic works included “Behind Closed Doors” by Charlie Rich, “He Stopped Loving Her Today” by George Jones, “Lucille” by Kenny Rogers, “(I Never Promised You a) Rose Garden” by Lynn Anderson, and “Stand By Your Man” by Tammy Wynette.  Drake also appeared on albums by Bob Dylan (John Wesley Harding, Nashville Skyline, and Self Portrait), George Harrison (All Things Must Pass), and Ringo Starr (Beaucoups of Blues).  If you visit The Musicians Hall of Fame & Museum in downtown Nashville, you will see Pete Drake’s prototype talk box as well as two of the main steel guitars that he used on many recordings as well as some of his personal items and clothing.

The museum is laid out geographically and features exhibits that celebrate the musicians that made recording hot spots out of Memphis (Reggie Young, who played guitar on “In The Ghetto” by Elvis Presley), Atlanta (Joe South, who played guitar on “Games People Play”), Muscle Shoals (Barry Beckett, who played keyboards on “I’ll Take You There” by The Staples Singers), Los Angeles (Joe Osborn, who played bass on “Bridge Over Troubled Water”), Detroit (Uriel Jones, who played drums on “Let’s Get It On” by Marvin Gaye, Chicago (Danny Seraphine, who played drums on “Twenty Five or Six To Four” by Chicago), New York (Will Lee, who played bass on “Mandy” by Barry Manilow), and Nashville (Chet Atkins, who played guitar and produced “End of The World” by Skeeter Davis).  All of the instruments on display are the actual ones used on hit recordings.  There are no copies or replicas.  The museum also features an interactive GRAMMY Gallery where visitors can sing with Ray Charles, take drum lessons from Ringo Starr, write songs with Desmond Child, and even rap with Nelly.

Museum Founder/CEO Joe Chambers also hosts Musicians Hall of Fame Backstage on our Youtube.com channel.  These shows feature interviews with musicians that highlight their careers and backstage stories.  The Vault Series is also featured on the same channel and it is comprised of interviews that Chambers has done in the past as he was putting together the museum.  Musicians such as Steve Lukather of TOTO, Don Felder of The Eagles, and Charlie Daniels are just a few of the featured guests.

If you are planning a trip to Music City, be sure and include The Musicians Hall of Fame & Museum to “Come See What You’ve Heard.”