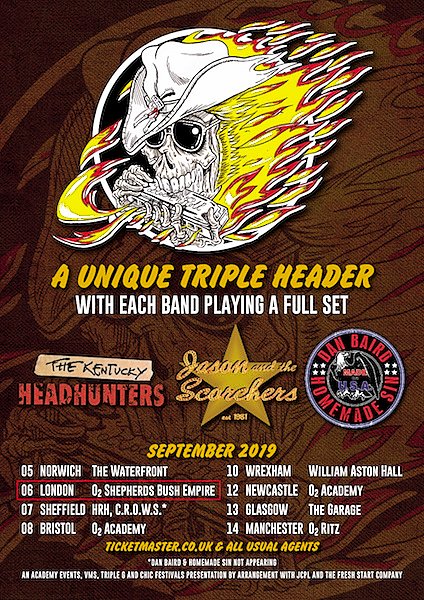 For the HeadHunters, the tour marks its third return to the UK following their maiden appearances in 2016, when they recordedLive at the Ramblin’ Man Fair. Despite
a 50-year career together, the HeadHunters had never traveled overseas
due largely to Richard Young’s admitted “uneasiness” with flying. But
after being persuaded by son John Fred Young (drummer for the popular
rock band Black Stone Cherry) the HeadHunters agreed to a tour of Sweden
and the UK. There in Maidstone, the Heads appeared before 25,000
enthusiastic fans at the Ramblin’ Man Fair where they supported
headliner Black Stone Cherry.

The 2016 tour and the resulting album has been met with incredible acclaim. (No Depressionobserved “Mighty fine work on a first pond-crossing gig that shows that the HeadHunters’ appeal has no boundaries.”)

The
upcoming September tour includes stops in Norwich, London, Sheffield,
Bristol, Wrexham, Newcastle, Glasgow and Manchester. The HeadHunters
could not be more excited about playing a tour with Jason & The
Scorchers and Dan Baird & Homemade Sin, said Young.

“In
the early day’s of the Head’s we created our own live radio show called
‘the chitlin’ show’ on the wonderful radio station in Munfordville, Ky,
WLOC,” Young said. “Joey Berry and Co. played everything on air from
Zeppelin to Hank Williams. We would come on live for 2 hours every
Tuesday night. Folk’s driving down I-65 would dial in and hear these
crazy guys live on the radio, and hear all the great new underground
bands, sometimes getting off the exit to find the station. It always
wound up being like a backyard cookout! It was a time when the College
Radio and Roots & Americana scene was in its infant stage. This is
where we were turned on to Dan, The Satellites and Jason and the
Scorchers.

“There
is no doubt that, had it not been for these pioneering acts helping to
open doors, that The Kentucky HeadHunters would not have had the
opportunity to finally start releasing albums after 20 year’s of
struggling to do so. The Heads have always held these fine folks in high
esteem for their personalities, as well as their music.

“Oddly
enough, the 3 band’s have never played together, and it’s finally
happening, for the first time, in the UK!” Young continued. “We already
know in our gut, this is gonna be a tour that will be off the chain! So,
watch out UK. Here comes a 50-Gallon Barrel of Rock & Roll!”

“As
the English would say I am ‘chuffed to bits’ to be doing the UK tour
with The Kentucky Headhunters and Dan Baird,” echoed Jason Ringenberg of
The Scorchers. “I am a fan and a colleague of both acts. Golly, what a
dream line up! Wear your rocking shoes and your ear plugs!”

“We
are bringing our version of the rock and roll circus to possibly the
very best audience (UK) in the world this fall,” Baird added. “Come see
the show that none of us want to have to close. The gauntlet of rockin’
is guaranteed to be flying all night. You’ll get your moneys worth.”

Warner
Hodges. a founding member of The Scorchers and guitarist with Homemade
Sin, added “Fans should really be looking forward to this 3-band triple
bill with Dan Baird & Homemade Sin, The Kentucky Headhunters, and
Jason & the Scorchers. They’ll get one helluva kick-a** show for
sure. Three bands, in rare form, trying to ‘One Up’ the next band.
Should be a hootenanny of friendly competition. Kinda a Southern Fried, Family reunion for the bands! Let It Rock Y’all!”

“Finally we play together amigos,” said Young. “See you there.”