THE KENTUCKY HEADHUNTERS ARE GOING “ON SAFARI” WITH U.K. TOUR IN FALL 2017 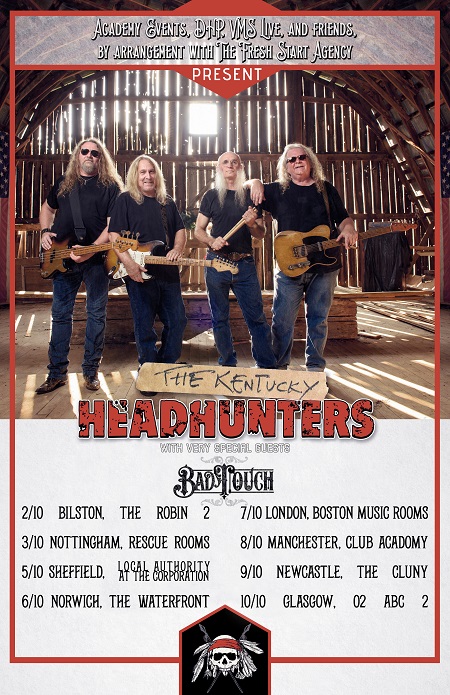 THE KENTUCKY HEADHUNTERS ARE GOING “ON SAFARI” WITH U.K. TOUR IN FALL 2017

Catch The Kentucky Headhunters on The Heartland Network’s “Reflections,” Beginning May 29

NASHVILLE, Tenn. (May 22, 2017)
– Known as “southern rock royalty,” The Kentucky Headhunters are
gearing up to take their rowdy, high-energy live show across the pond,
as they return to the U.K. for a string of performances this fall.
Supporting the American band will be U.K. rockers Bad Touch, who will
join the Headhunters on all 8 shows this October.

“We first met Bad Touch when they were chosen as our support act
after my son John Fred Young’s band, Black Stone Cherry, convinced us to
do our first-ever U.K. tour in 2016. In a mere week of touring, the
Headhunter’s and Bad Touch became like a band of brothers,” said Richard
Young of The Kentucky Headhunters. “There is a certain charm and
charisma between the two bands that transcends to the fans of both
bands, on stage and off. We’re proud to announce their return for this
year’s October U.K. dates. Simply put, it wouldn’t be the same without
them.”

The Kentucky Headhunters have been crisscrossing North America fresh off the 2016 release of On Safari, the band’s 12th studio album. A
Plowboy Records/Practice House Records joint venture, the album
combines southern rock, blues, Americana and country sounds sure to
captivate audiences overseas. Click here to purchase On Safari.

The week of May 29, tune into The Heartland Network as members of the
band look back on some of their most stand-out career memories. The
half-hour interview show airs all week on various affiliates, check
local listings here.

About The Kentucky Headhunters:
Known as “Southern Rock Royalty” and the “great American rock ‘n’
roll band,” The Kentucky Headhunters have maintained a longevity most
acts can only dream about. With a GRAMMY® Award, two Top 10 charting
albums, four consecutive Top 40 hits and countless other honors, The
“Heads” are credited for creating a unique blend of honky-tonk, blues,
and southern rock that appeals to the toughest music critics and
listeners of all kinds. Getting their start in 1968, brothers Fred and
Richard Young and cousins Greg Martin and Anthony Kenney, from Edmonton,
Kentucky, formed Itchy Brother, which later morphed into The Kentucky
Headhunters after Kenney departed and Doug Phelps joined the band. Their
first album, Pickin’ On Nashville, (1989), surprised the world when it became a major success, selling over two million copies. Their 2015 release Meet Me in Bluesland,
included the last vocals ever recorded of the late, great pianist
Johnnie Johnson — Rock N Roll Hall of Famer and legendary keyboardist
for Chuck Berry. The album reached the No. 1 spot on the Billboard Blues
Album chart the week of its debut. It also garnered top placement on
the Billboard Americana Chart. The band’s Fall 2016 release On Safari
is a southern rock album that tips the hat to family and the southern
way of life. The Kentucky Headhunters still tour extensively throughout
the United States and Canada, and recently completed their first-ever
European tour. For more information on The Kentucky Headhunters, please
visit www.kentuckyheadhunters.com.