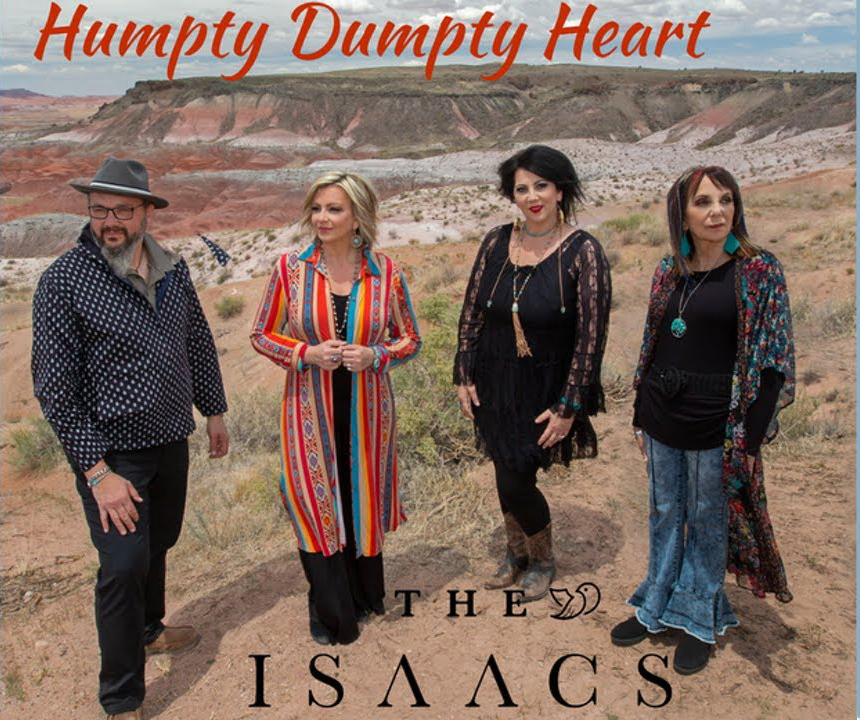 The multi-GRAMMY-nominated group, The Isaacs, don’t like to let the grass grow under their feet and a glance at their current schedule proves it.

One of the most in-demand family acts in any music genre, they are currently continuing on a long string of tour dates, already stretching into October, interspersed with frequent stops on the stage of the Grand Ole Opry.  Additionally, there’s a charting single and their newest album to keep them busy, along with leading annual guided tours to the Holy Land.

Their current single, “Humpty Dumpty Heart”, has been welcomed by their legion of fans and is steadily climbing the charts.  “Humpty Dumpty Heart” is the second single from the group’s 2021 album The American Face. See the official music video for the song here https://www.youtube.com/watch?v=umQXI5nHZrQ.  Written by members Sonya and Becky along with hitmaker Ronnie Bowman, the song is out everywhere now. Listen to a preview here: https://www.theisaacs.com/product-page/the-american-face.

The musical roots of the Isaacs family group go all the way back to 1971, with the matriarch Lily Isaacs who spent time as a folk singer recording for Columbia Records. Her three children Ben Issacs, Sonya Issacs Yeary and Becky Bowman join her in one of the most vocally compelling groups to hit the stage in many years.

2021 Gospel Music Hall of Fame inductees, the masterful vocals and acoustic instrumentalists and songwriters offer a unique style that only family harmonies can create. Add to that their contemporary instrumentation and you have a group that appeals to a wide-ranging audience.

Their remarkable sound has led to invitations from high-profile contemporaries, including Dolly Parton, Reba McEntire, Vince Gill, Alison Krauss, John Rich, Paul Simon and many more, to sing on numerous albums and stages. Additionally, The Isaacs’ are among the most requested artists to sing America’s National Anthem at sporting events, The White House, and many other special occasions.

Their musical style has been influenced by many genres of music such as country, bluegrass, rhythm and blues, folk, contemporary, acoustic and southern gospel. Drawing from these influences, The Isaacs released their newest album, The American Face, via their House of Isaacs label. The American Face is a 12-song collection split between new material like the title track, released as the lead single, and covers of classics like “More Than Words” by Extreme, “You’re The Inspiration” by Chicago, “We Can Work It Out” by The Beatles and “Forever and For Always” by Shania Twain. A portion of proceeds from the album will benefit The Bridge Ministry, a 501(c)(3) non-profit organization in Nashville, which exists to alleviate the suffering of underprivileged children, the homeless and the working poor by providing life-sustaining resources and a message of hope.

The Isaacs, first line descendants of Holocaust survivors, have also raised hundreds of thousands of dollars to bless Israel, specifically Holocaust Survivors, Israeli Defense “Lone” Soldiers and orphans through their non-profit organization, The Isaacs Foundation via The Fishman Isaacs Israel Initiative (FIII), since 2018.  They also guide hundreds of guests each year on a pilgrimage to Israel and explore the Holy Land through a unique and exclusive lens. “Our goal is to bring the message of hope to all seeking the love of our God,” says the family.  “We also know that spreading our style of music to new audiences can create a new venue for both the consumer and for us,” they conclude.

The American Face is a record the group has wanted to do for quite some time and is anxious to get out on the road and share their interpretations of these classic hits, along with the originals sitting alongside of them. The title track is an ode to America, the good, the bad and the ugly, but to know that we are all brothers and sisters and in this together is a message all should appreciate.  The song soars with Sonya’s velvet vocal as the missive paints a picture of who we are.  It is a powerful 3 minutes.

The Isaacs are frequent guests on the Grand Ole Opry, active members on the Gaither Homecoming Videos and Concert Series and perform over 100 dates a year to welcoming fans throughout the world. Having performed at prestigious venues like Carnegie Hall, The Isaacs have also entertained fans at CMA Fest, on the “CMA Country Christmas” special and at many professional sporting events, including The Cincinnati Reds, Cincinnati Bengals, Indiana Pacers, Brooklyn Nets, Tennessee Titans, Houston Astros and Nashville Predators games.

The award-winning group has also been nominated at and performed on the GMA Dove Awards where they have earned seven trophies, the International Bluegrass Music Association Awards, the National Quartet Convention Awards and the Inspirational Christian Country Awards. Two of their recent projects, executive produced by NFL Hall of Famer Terry Bradshaw, received consecutive GRAMMY nominations for “Best Roots Gospel Album” as well as a nomination for “Best Roots Gospel Song.” The Isaacs feel blessed to be able to travel and spread the message of hope and grace through song and story. More about the Isaacs at their website https://www.theisaacs.com and on Facebook https://www.facebook.com/TheIsaacs/ on Instagram (@theisaacsmusicofficial) and Twitter (@IsaacsMusic).

Preshias Harris  is a music journalist and music career development consultant with the emphasis on new and aspiring artists and songwriters. Her book, ‘The College of Songology 101: The Singer/Songwriter’s Need to Know Reference Handbook’ is available at   www.collegeofsongology.com   Follow her blog at  www.nashvillemusicline.com