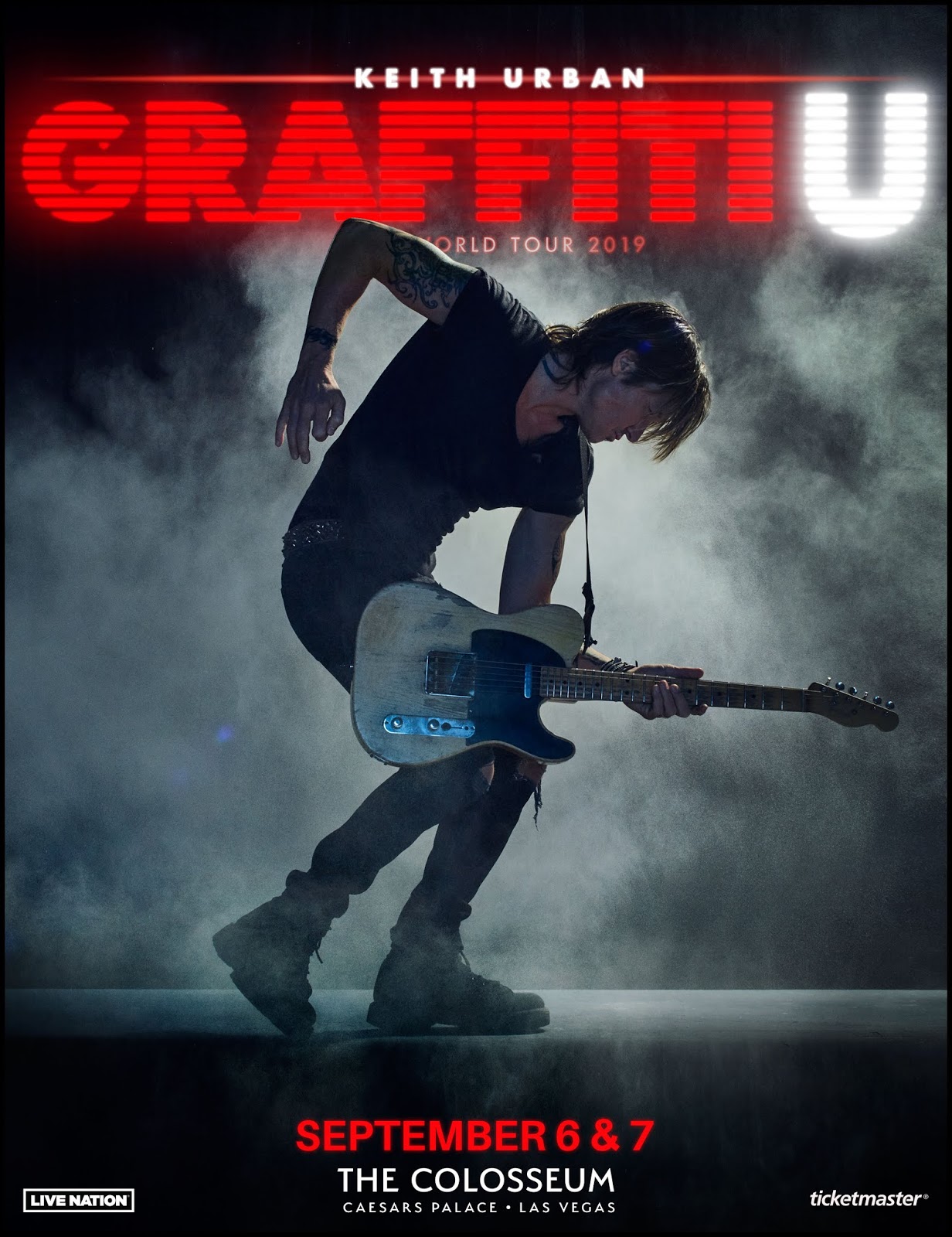 THE COLOSSEUM AT CAESARS PALACE TO CELEBRATE GRAND REOPENING WITH BACK-TO-BACK EVENINGS WITH KEITH URBAN SEPT. 6 & 7, 2019

In celebration of the grand reopening of
The Colosseum at Caesars Palace, four-time GRAMMY Award winner Keith Urban
will bring his acclaimed “GRAFFITI U WORLD TOUR” to Las Vegas for the first time with back-to-back evenings on Sept. 6 and 7.
The performances from the reigning CMA and ACM Entertainer of the Year
will mark the debut of the newly-enhanced Colosseum,
as well as the first performances to utilize the venue’s new general
admission capability on the main floor, creating a high-energy
entertainment experience for fans. The shows are scheduled to begin at 8
p.m.

Urban
is one of the most explosive live performers in music today.  His
concerts are critically hailed the world over and feature many of his 24
chart-topping songs including
Graffiti U’s “Coming Home,” RIPCORD’s “Wasted Time,” “The
Fighter,” his mega hit “Blue Ain’t Your Color,” and seminal No. 1’s
including “Somebody Like You,” “Days Go By,” “Long Hot Summer” and
“Stupid Boy.”  His now legendary unpredictability has seen
Urban performing with fans, with special guests, giving away used show
guitars and performing solos perched atop audience seating.

General ticket prices beginning at $59, plus applicable tax and fees,go on sale to the general public starting Friday,
July 19 at 10 a.m. PT at ticketmaster.com or
in-person at The Colosseum at Caesars Palace box office. Members of The
‘Ville, Keith Urban’s official fan club, will have access to a presale
beginning Saturday, July 13 at 10 a.m. PT.

Citi
is the official presale credit card for Urban’s performances at The
Colosseum at Caesars Palace. As such, Citi cardmembers will have access
to purchase presale tickets beginning
Monday, July 15 at 10 a.m. PT through Citi EntertainmentSM. For complete presale details visitwww.citientertainment.com.

The current CMA and ACM Entertainer of the Year and four-time GRAMMY Award winner Keith Urban released “We Were” – on May 14th – his first new single of 2019. It comes after the 2018 release
of Graffiti U and his acclaimed “GRAFFITI U WORLD TOUR,” which
played to more than a million fans in seven countries on three
continents. Besides four GRAMMY Awards, Urban has won 13 Country Music
Association Awards, 11 Academy of Country Music Awards,
four People’s Choice Awards and four American Music Awards. He is also a
member of the Grand Ole Opry.