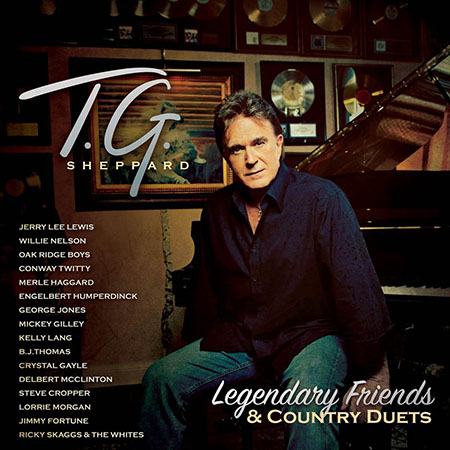 NASHVILLE,
Tenn. (September 8, 2015) – Since leaving home in 1961 to pursue a
career in music, TG Sheppard has done it all. He scored a job as a
promotions executive for RCA Records, where he became friends with Elvis
Presley who believed in his talent so much that he gave him his first
tour bus, topped the Billboard Hot Country Songs chart an
astonishing 21 times, and left an everlasting mark on Country music.
Over the years, the smooth singer/songwriter has made a lot of
impressive friends, which inspired the vision for his upcoming album, Legendary Friends & Country Duets,
which is set for release on Oct. 30 via Cleopatra Records. On the
upcoming project, TG collaborates with some of the most influential
artists of all-time and those that he can actually call his personal
friends.

“In my 40 years of recording music, this album has to be my most
favorite I’ve ever recorded,” says T.G. Sheppard. “I’m very honored that
so many of my personal friends came in to sing, with no questions
asked, and gave their all.”

Listeners will be taken on a journey, with songs that hit the highest
of highs and the lowest of lows. Standout tracks on the album include
the fun, “It’s A Man Thing” which features late country icon George
Jones, the relaxing sing-along, “Song Man” with Grammy® winner Merle Haggard, and the inspiring, “In Texas” with country outlaw Willie Nelson. Legendary Friends & Country Duets will
bring traditional country music back to the forefront, as the style
currently makes a demanding comeback. With the remarkable list of guests
on the album, Legendary Friends & Country Duets is a must-have for all music fans to remind them what made country music great.

“As a record company working multiple projects in all genres, it is
always special to find an artist and project like what T.G. Sheppard has
brought to Cleopatra Records,” says Tim Yasui, GM/Cleopatra Records.
“T.G. is loved within the Country music community and this project
proves that his fanbase is much more than just the country music fans –
his fellow artists love him, too! Albums like this come once in a
lifetime and Cleopatra Records is very proud to be involved in this
iconic recording.”

Sheppard has already begun promoting the album, with several upcoming
appearances already scheduled. Airing on September 13-14, NBC’s “Open
House” will take viewers inside the stylish Nashville home of Sheppard
and his wife, singer/songwriter Kelly Lang. The show is described as the
ultimate insiders’ guide to real estate and home design. Next, offering
fans a never-before-seen glimpse into the past, present and future of
TG’s storied career, Sheppard will appear on Heartland-TV’s new show
“Reflections” on Sept. 14 (check your local listings).

1. Down On My Knees (with OAK RIDGE BOYS)
2. The Killer (with JERRY LEE LEWIS)
3. If You Knew (with RICKY SKAGGS & THE WHITES)
4. It’s A Man Thing (with GEORGE JONES)
5. 100% Chance Of Pain (with B.J.THOMAS, JIMMY FORTUNE)
6. Wine To Remember And Whiskey To Forget (with MICKEY GILLEY)
7. The Next One (with LORRIE MORGAN)
8. Dead Girl Walking (with KELLY LANG)
9. Song Man (with MERLE HAGGARD)
10. Why Me Lord (with CONWAY TWITTY)
11. In Texas (with WILLIE NELSON)
12. Have You Ever Loved A Woman (with ENGELBERT HUMPERDINCK)
13. I’m Not Going Anywhere (with CRYSTAL GAYLE)
14. Fifteen Rounds With Jose Cuervo (with DELBERT McCLINTON)