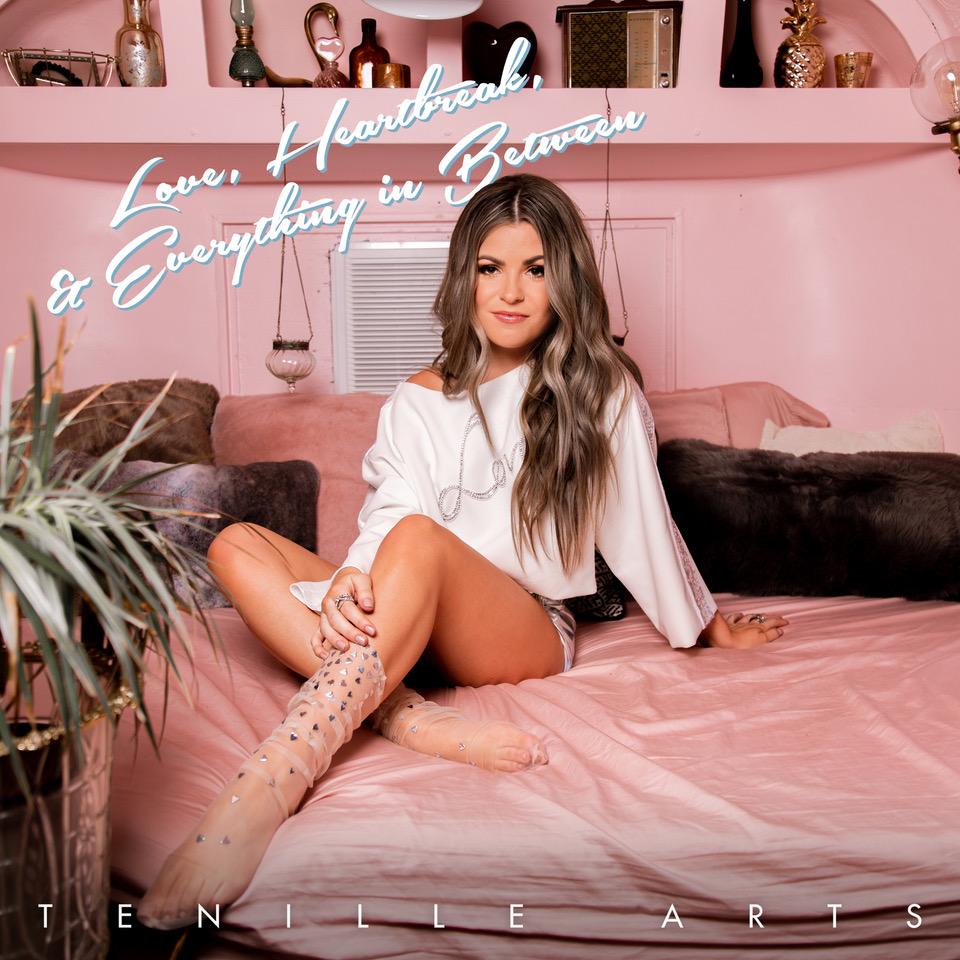 When
Tenille Arts thought about what to call her new album, she only had to
look at her life over the last couple of years to come up with Love, Heartbreak, & Everything in Between. The 12-song album, due out January 10, 2020 on Reviver Records/19th &
Grand Records, gives a glimpse into dreams that have come true,
sacrifices made along the way and…well…everything in between. The album
is available for pre-order beginning todayHERE.

“I’m so excited about this album,” said Tenille. “It’s everything I’ve been through this past year, so I decided to title it ‘Love, Heartbreak, & Everything in Between.’
It’s four love songs, four breakup songs and four songs about
everything else in life. I got to collaborate with new songwriters and
producers, and I’m so proud of the creativity on this album.”

Tenille
wrote two of the songs solo and partnered with the likes of Allison
Margaret Cruz, Whitney Duncan, Derek George, Alex Kline, Palmer Lee,
Josh Logan, Lizzy McAvoy, James Slater, Grand Vogelfanger and Adam
Wheeler on the other 10 cuts. Kline, Vogelfanger and Wheeler, along with
Matt Rovey, have production credits on the collection.

She will perform her current single, “Somebody Like That,” when she makes her unprecedented third appearance onThe Bacheloron Monday, January 6, 2020 on the ABC television network. Additional
major television appearances supporting the album release will be
announced in the coming weeks.

“Somebody Like That” is receiving incredible exposure on official Spotify playlists New Boots, Wild Country, All About Country and others, and YouTube Music featured it on the cover of Country’s New Crop. Apple Music, Amazon Music and Pandora are big supporters, helping Tenille garner over 31 million lifetime streams.

The
album’s debut single, “I Hate This,” topped the Radio Disney Country
Chart and the iTunes Country Chart, hit #4 on the iTunes all-genre chart
and #2 on the iTunes Music Video Chart. Check out the “Somebody Like
That” single and music video HERE.

Love, Heartbreak, & Everything in Between

1. “Somebody Like That” * – Tenille Arts, Alex Kline, Allison Margaret Cruz

Born
and raised in the small prairie town of Weyburn, Saskatchewan, Tenille
Arts picked up the guitar and penned her first song at age 13 and has
been performing across the US and Canada ever since. She made her first
appearance on The Bachelor in
January 2018 singing her original song “Moment of Weakness.” The
performance resulted in a record deal with powerhouse indie label
Reviver Records. She made her second appearance on the show in January
of this year performing “I Hate This.” The song hit #1 on both the U.S.
and Canadian iTunes Country Charts and #9 U.S. iTunes all-genre
following the episode.

Tenille
has released an EP and a full-length album, and her music has tallied
over 31 million streams. Noted music critic Tom Roland was so moved by
her music that he has penned three full-page features in the Billboard Country Update. Music Row Magazine critic
Robert K. Oermann called Tenille “Promising in the extreme.” Streaming
giant Pandora named her one of their new artists to watch, and CMT
included her in their “Ten Must-See Indies You Need to Know,” a video
discovery program that spotlights rising independent artists and
established artists from independent labels. Rolling Stone named Tenille one of their “10 New Country Artists You Need To Know,” calling her “An edgy, Fearless-era
Taylor Swift with crystalline vocals; ideal for hopeless romantics who
are fire signs,” and PopCulture.com named her one of their “Country
Artists to Watch in 2018.”

Tenille made her Grand Ole Opry debut on September 21, 2019.

To learn more about Tenille Arts go to www.tenillearts.com