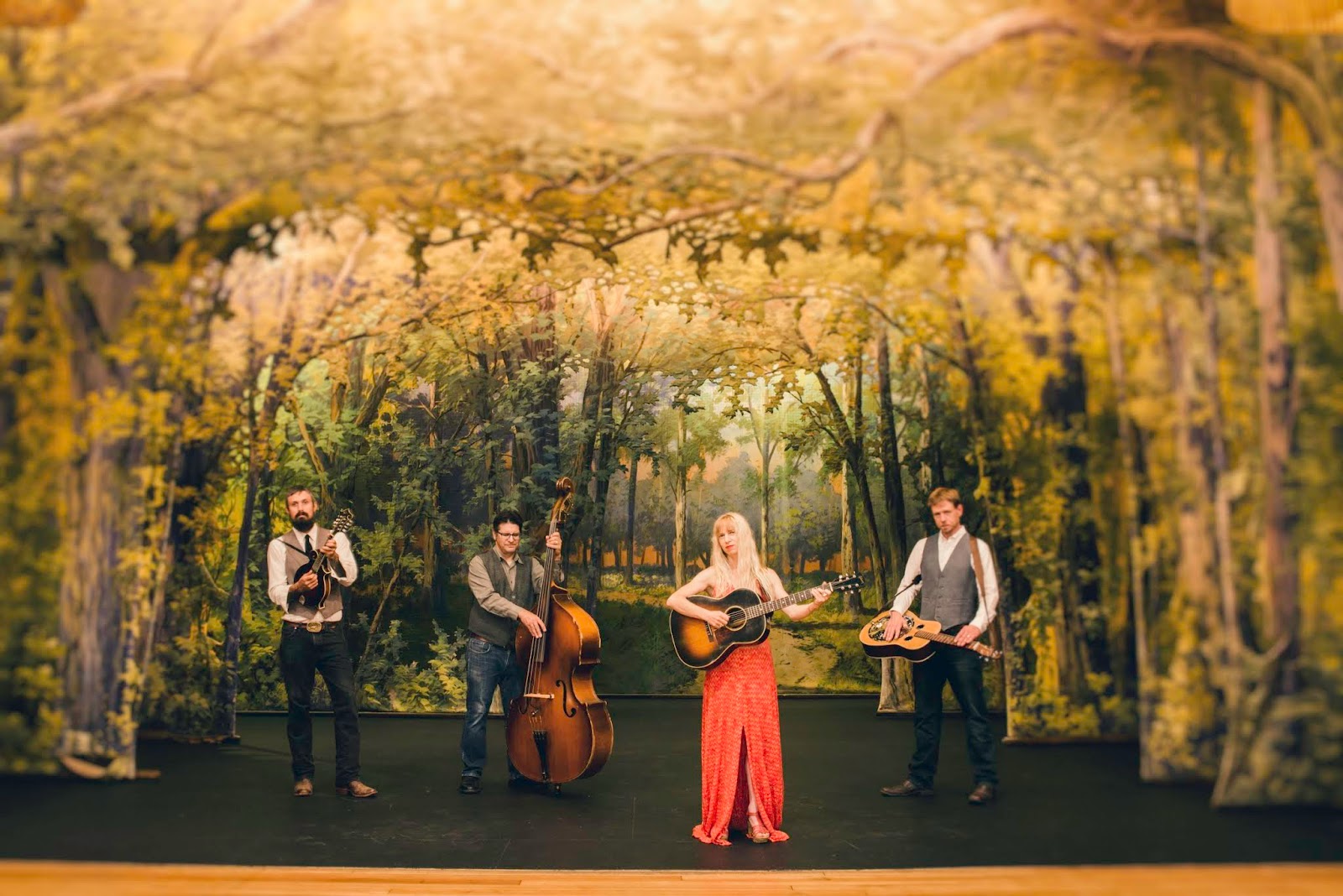 Anya Hinkle:  Tellico is a string band from
the American south, in the southern Appalachian mountains in Asheville, North Carolina.
All the members share a passion for music that started when they were young,
and music was the main reason that brought them to Asheville, NC where they all
met in the early 2000s. Their early love of bluegrass and acoustic music is the
basis for their foundation and common ground musically, however all the band
members have eclectic tastes contribute to their unique sound. While the form
and style really speak to the tradition of southern Appalachian musical
traditions, their songwriting and arrangements pull in sounds of folk, blues,
and country that appeal to fans outside the bluegrass genre.

Anya Hinkle: We recorded our second album Woven Waters, which was one of the
most challenging things we had done as a band. Under the watchful eye of producer
John Doyle,the album really blends Appalachian sensibilities with
a British Isles influence, creating an eclectic set of poignant songs that speak
to our modern times. Doyle, one of the most influential Celtic musicians in the
music industry today, really hepled us to create and record simultaneously in
the studio of Grammy-nominated engineer David Arnold in Johnson City, TN. The
practice brought us to uncharted territory in our musical landscape, built upon
our core sound but with an enhanced level of awareness to texture and melody.
Augmented by John’s contribution on bouzouki on much of the album, the chord
choices, instrumental themes and rhythmic dynamics intertwine, carefully
weaving together the natural flow of each song’s intent, and inspiring the album’s
title.

Anya Hinkle:  We are really excited to
have the album released on Organic Records and are currently in the process of
planning our release tour and videos for various songs on the album. The
official release date is 11/9/18, and there is info on our website (www.tellicoband.com) about the album,
and we will continually update that as new videos and shows come out, and of
course on our social media sites and Spotify.

Anya Hinkle:  Our albums feature our own
original compositions, either by me or Greg Stiglets. This particular album
features songs inspired from our experiences over the past few years. The first
single “Courage for the Morning” was written on Martin Luther King Day just
before the Trump inauguration.  I was
thinking about how people’s actions can inspire others, from the great
revolutionary leaders to the everyday efforts of ordinary people.  This song, for me, has been about looking
inward to see how each one of us can be the change that is so desperately
needed in this world.  So, if you sing
along to this song, you will be saying to yourself ‘I will walk, I will sing, I
will bring a little courage for the morning’.
That is something each one of us can take to heart and think really
think about:  what is it that I can do to
help another person in this world?

Our
songwriting is often inspired by stories, creating a vehicle for finding common
ground using evocative wordcraft and imagery.
Like “Courage,” “The Ballad of Zona Abston” is another song with
political leanings, but also simply the true story of a woman who was raised in
a former coal mining community in middle Tennessee.  Zona told me her life story over her kitchen
table.  It illustrates her strong will to
survive through decades of crisis, stress and difficulty and reflects the
desperation of struggling people, particularly women.  When you really listen to what someone’s been
through, you naturally develop a lot of compassion for what people have to deal
with in this world.

Other songs
on the album relate fantastic stories of animals, weather, skies and mountains.  Stiglets’ “New Moon” reflects the fantastic
and frightening imagery of one’s mind upon hearing mysterious noises in the
night woods, while “Salsa” is the story of a dog, spooked by thunder, that run
away but returns to its owner after five years adrift: ‘and as I turned to meet
a beast, my eyes did light in wonder’.
“Palisades” and “West of the Cumberlands” are principally about travel
and geography, the longing for home when on the road, even when you are in new
and interesting places with the band.

Three of
the album’s songs deal with change, loss and dying. “Fill the Air” was
co-written by Stig and myself, based on a melody by Stiglets.  The lyrics became focused on the story of
Rory Feek, a country singer and young mother that fought an unsuccessful battle
with cervical cancer.  “Driving home one
afternoon through Southwestern Virginia, I was inspired by proximity to the
Stanley Brothers homeplace, and thinking about the Feek story.  I imagined lyrics that the Stanleys might
sing: ‘What kind of God would take you away from your home?’  Similarly, “It’s Just Rain” was written about
the late James King and inspired by a call in Bluegrass Unlimited to help tell
the story of James’ life during his final year.
Some of the story is imagined, some of it I remember from performances I
saw of my favorite bluegrass singer of all time, Mr. James King: ‘Singing
through the tears is what I always did.’
Finally, “Like November” is a story of letting go after things changeirreconcilablein relationships, and end.  ‘I hear but I’ll never see, how our stories
end so differently.’

Anya Hinkle: While our songwriting and instrumentation are consistent between
our 2 albums, we really wanted to go deeper with the songs on Woven Waters to
really break into new ideas about arranging songs that get away from what is
typical in acoustic music. For example, we wanted the instrumental sections to
follow different chord progressions than the verses and choruses, and have the
instruments have their own melodies and harmonies separate from the vocal
sections. We wanted also to experiment with rhythmic dynamics and groove. Doyle
really helped us get out of the way we tended to think about arranging our
songs, and seeing him work with our material was really educational for us. I
think we will be able to really build on those ideas in future, so the
experience really helped us grow artistically as a band overall.

Lamitschka:  If you had the
chance to change something about the music industry, what would it be?

Aaron
Ballance: Ideally, that every great artist who deserves/deserved to make it
could succeed. Unlike a lot of vocations, with music there aren’t absolute
rules for success. As such, there are so many unsung heroes out there who have
mastered their craft and persevered for years with power and integrity but who
will never be heard. And there are others who abandon their craft or suffer in
spirit because they can’t break through the barrier of the music industry. I
wish the industry advocated more for artists.

Lamitschka:
What was your big break that got you into the music business?

Anya Hinkle: I’ve heard of big breaks before, but these days it seems like more
of the musicians I meet are on a long, slow boil. It’s just pushing the ball up
the hill consistently over a long period of time. I feel like not giving up
completely has been my only big break, and that the opportunities we have had
have developed out of just keeping going and making the best music we could
over many years. People’s careers have so many ups and downs, and for so many
different reasons. All I can figure out to do is stay positive and creative,
open to possibilities and learn as much as I can about my craft, and grow and
change and develop as life directs me to do. The music business is just like
any other business in many ways, it takes time to establish yourself and it
never stays steady, you have to constantly be thinking creatively about how to
make it work for you financially, creatively. and lifestyle-wise.

Anya Hinkle: I’ve always liked writing but never thought of writing songs until
about 10 years ago when I started my first band. I really found I enjoyed the
elements of wordcraft but with the constraints of a song…fitting poetry into
a format that also has to have melody and chords and work with your ensemble. I
feel like I’m continually growing as a songwriter, even just the idea of
calling myself a songwriter didn’t really feel comfortable until a few years
ago. I used to feel like songs would stop, that I would stop having ideas for
songs. But currently I feel almost overwhelmed with ideas, both musically and
thematically, sometimes it can feel difficult to even know where to start. I’ve
taken a “one song at a time” approach, just trying to let each song have
something of its own, and not feel that one song has to have everything. It’s
just one song at at time. Some are better than others. But just keep writing.
Don’t hurry, but don’t give up!

Aaron
Ballance: The relationship I can establish with my instrument, the musicians
with whom I’m playing, the sound in a given space and an audience’s reaction to
the music are all factors that drive me to feel inspired during a musical
performance. When these aspects are in harmony, the music is powerful and
life-affirming.

Lamitschka:
Tell us about the fan club and how people can join it.

Answer:
We have a number of very loyal European fans and I’m always impressed with how
supportive they are and how well they keep in touch! It just seems like there
is a real appreciation for acoustic music and the arts in general, which is
something we aren’t as accustomed to in the US. We have never toured in Europe
but hope to get the chance sometime soon. In the meantime, the internet really
makes it possible to connect online, and to that end, on our website
www.tellicoband.com there is info about signing up for our mailing list. And of
course we do Facebook and Instrgram and are posting there regularly about what
we are up to.

Lamitschka:
What’s the best compliment a fan has ever given you?

Anya Hinkle: some of the feedback we get from our music is that it has helped
people get through difficult times. I think that is one of the wonders of
music, is that it helps us process life. Certain songs or albums are
inseparable from certain experiences in our lives. I remember Tony Rice’s “Manzanita”
album from a month-long road trip in New Zealand, Jimmy Cliff’s “The Harder They
Come” album from my junior year in high school in southwestern Virginia, Gillian
Welch’s “Soul Journey” from a 6-month stint on tiny tropical an island near
Tahiti. None of that music has anything to do with the place I became
completely captivated by it, but it is connected in my mind. So it just blows
my mind when people associate my songs with very memorable and sometimes very
difficult moments. It’s a real honor to be with them, to sing for them, and
help frame those experiences for them in some way.