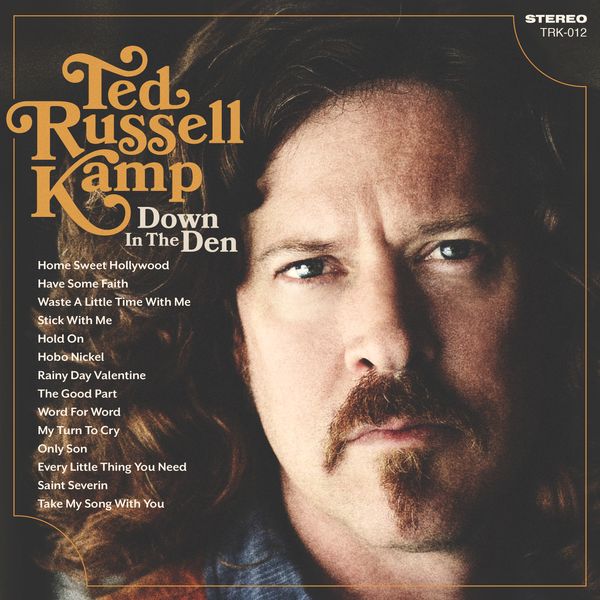 Answer: The Den is the name of my home studio where I do most of my recording and
producing. Most of this record was recorded there. I also really liked
the intimacy and comfort of the name the
Den and thought it fit with these songs too.

Answer: I wrote some myself but I did a lot of co-writing on this record. I had a
publishing deal in Nashville for about 5 years a while back and I still
love co-writing. Many of these songs
were written with friends who are also artists that I am a friend and
fan of too and I love including my relationships and friends on my
records. Some of the songs were written with Gordy Quist of the Band of
Heathens, one with Brian Wright in nashville, one
with Matt Szlachetka in L.A., one with Kirsten Proffit and one with
Shayne Alexander.

Answer: One of the goals for my last album, Walkin’ Shoes was to have it sound and
feel like it was a live band in the room with you so moat of the
arrangements are just 4 or 5 people playing
as if it was live. This record is a lot more lush and has fuller
arrangements and productions with more horns, hammond organ, percussion
and harmony vocals.

Answer: My first single is Have Some Faith. I think it’;s a positive message about
wanting and needing communication and comfort. That’s something we all
need. I also write this one with Matt Szlachetka and our goal was to write something honest and very simple,
kind of like the way J.J. Cale could write these very simple Zen blues
songs.

Answer: Stick With Me.

Answer: Honest ones. The first step is always the song. I can;t tell you how many
songs I have that have never made it on a record or to the band stand.
When the song has something powerful
and real to it, then it kind of tells me what it needs in terms of
instrumentation and players. Helping that solo guitar and vocal (or bass
and vocal) version of the song be fully realized as I play it and
record it and add instruments is one of my favorite
parts of making a record.

Lamitschka:  You did a duet with Shooter Jennings and Kirsten Proffit. How did that happen to come about?

Answer: Shooter Jennings – I’ve been playing in Shooter’s and for about 15 years now
and I’ve written a handful of our songs too. He’s a great friend  so it
was great to have him be a guest
on Home Sweet Hollywood, which is a tongue in cheek song about L.A. and
the music industry: things we both know a lot about!

Kirsten Proffit. – Kirsten used to be in a band called Calico and I would play
bass with them a lot. Then I started co-writing with her and loved the
songs we got. One was “Life on the River” from my earlier album called Flying Solo. We got together and
wrote “Take My Song With You” for this record and we made it into a
duet. I think it’s a beautiful way to close out this record and I love
the heart and intimacy she brings to it.

Answer: I have many, but one is “Hold On” from the record. It’s a gospel
influenced rock / singer songwriter style song and i wrote it with Gordy
Quist from the Band of Heathens. He also sings
harmony vocals on it too. I love the statement and compassion in the
lyrics and that it starts intimate and acoustic and gradually grows to
be one of the bigger and more powerful band performances on the record.

Answer: 100%. One of the things I love about being an independent artist is that I
get to steer my own ship, record the music I want and then release it
the best I can.

Answer: I’ve never had a #1 hit. I have had a song that was #1 on Texas Radio – it
was Steady at the Wheel and it’s from my first record. It became a hit
for Shooter Jennings.

I also just played on my trust Grammy Winning album. I played bass on the new Tanya Tucker record, While I’m Living.

My goal is to always try to make the music as powerful and special as it
can be. But sometimes you really hit on something magical that makes it
even more infectious and makes it a hit.

Answer: I’ve had a few people get tattoos of my name or signature. That’s quite and
honor. I’ve also had many artists and fans perform the songs I’ve
written. Tats’ quite amazing. The I can say
something and hit resnare enough that someone else wants to sing it and
make it their own.

Answer: My musical roots are very deep. I really want and need to make music
everyday. The I was in high school and college I was always in 4 or 5 or
6 bands at a time so I was always rehearsing
and playing. after school, my hobby became my job. It’s been a lot of
hard work, but I’m proud and honored to be anon to make music for a
living for the past 20 years. I want to keep doing it and plan to.

Answer: Who knows. There’s a lot of music I feel is overly commercial but that’s
ok. Others love it and enjoy it. I;m glad that there are people out
there like me making independent and more
eclectic and roots based music. Just as there are all kinds of people:
some you admire and respect, some you befriend and some you can steer
clear of, there are all kinds of musicians so you can find what you love
and find your community to create in.

Answer: It’s big and crazy. But I;m glad I have a home in it.

And here are the lyrics to Home Sweet Hollywood, which tackles that subject head on.

Home Sweet Hollywood
you gotta be crazy to stay

For every actress waiting tables
and bartender in a band

there’s a screenwriter sitting in a coffee shop

Home Sweet Hollywood
You gotta be crazy to stay

Home Sweet Hollywood
It’s a game that we all play

You got to live it, love it, never get enough of of it
cause fame is a mirage

Answer: I would have the American Government subsidize the arts the way it does
in many other countries. There’s something beautiful about the ‘survive
if you can make it’ ethos of the US, but
I have seen how government grants and subsidies for the arts effects
the way the public and culture at large values music and creativity.

Answer: Writing songs and playing them for people.

Lamitschka: Are you doing anything to take music beyond its current borders or are you happy where it is?

Answer: There are only so many Jimi Hendrixes, Bachs and Beatles who really do expand
and invent new music. The rest of us have a hard enough job of taking
the sounds and styles we have heard
and reinterpreting them to make them our own and hopefully say
something personal and new with them.

Answer: Hard work. I finished college, moved to Seattle and started answering ads in
the paper, playing on the street and doing anything I could d to start
making music for living. There was
no big break – just love of music, the desire to get better and the
desire to keep doing it with more talented people.

Answer: I don’t consider myself a star. I’m glad I have a lot of folks out there
that love what I do and am honored to play for them and make new music
for us all. My family and friends saw
my commitment and recognized that I played well and wanted to do this.
So overall they were accepting and supportive.

Answer: I have always heard music in my head often when I hear another song
written or performed by someone else, I can immediately hear a different
version of which is the way I would d want
to do it. Writing and recording and playing are easy for me to make
that music happen.

Answer: I spend time with my family or I make music. There;s not much else for me and I love it that way.