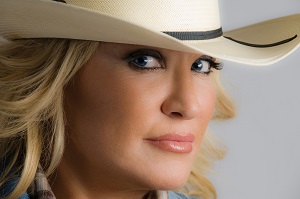 NASHVILLE,
Tenn. (April 2, 2015) – Tanya Tucker – the sultry voiced female
vocalist behind such hits as “Strong Enough To Bend” and “I’ll Come Back
As Another Woman” – is back. After a lengthy hiatus from the road, the
legendary songstress returned to the road this past weekend with two
sold-out shows in Illinois and Indiana. And, she’s only beginning.

Tucker has a slate of shows lined up for the spring and summer months
with dates continuing to be added to the schedule. Having recently
signed with APA, Tucker returns to performing armed with a virtual
arsenal of some of the biggest classics in Country music, such as “The
Jamestown Ferry,” “Soon,” and “Texas (When I Die).” Of course, no Tucker
performance would be complete without “Delta Dawn,” the Alex
Harvey-written classic that launched her career into the stratosphere in
1972 – when she was only thirteen. In between the hits, Tucker will
share many stories and anecdotes of her iconic career.

Though she has been away from the stage for a while to spend time
with her children, she says she’s excited to be back in the spotlight.
“I am so excited about the upcoming tour,” says Tanya Tucker.  “Being in
front of a live crowd is something that I feed off of. From the
reception I felt from the first two dates, I think it’s definitely going
to be a lot of fun returning to performing. I’ve missed the fans a
lot.”

Steve Lassiter, SVP/Partner and Head of Concerts at APA Nashville,
says Tanya Tucker and live performing are two things that simply go
together. “There is something electric about a Tanya Tucker performance.
She’s one of the most legendary recording artists of all time. She’s
not just singing the music. She’s lived these songs. Some sad. Some
happy. But all throughout the show, she sings and performs as only Tanya
Tucker can. Returning to the road is something we all are very excited
about.”