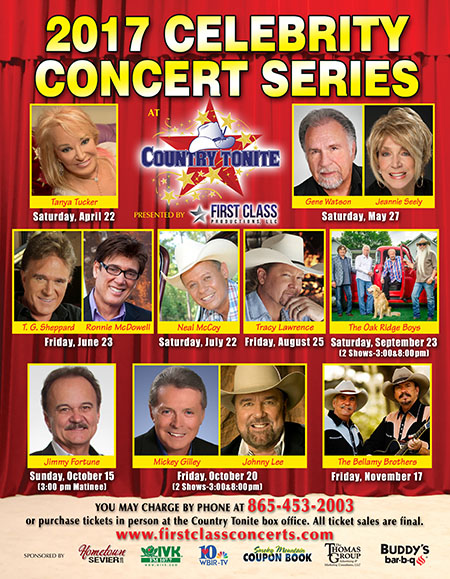 PIGEON FORGE, Tenn. (February 10, 2017)
– The sound of Country Music will be alive and well in the heart of the
Smoky Mountains throughout 2017 with the announcement of an eleven-show
Celebrity Concert Series at the Country Tonite Theater, one of the top
musical theaters in Pigeon Forge.

Tanya Tucker – one of the most revered and respected song stylists in
Country Music history – will kick off the 2017 concert series with a
performance on April 22 at 8pm and the legendary Bellamy Brothers will
close out the series on November 17.

Tim McAbee, whose company First Class Productions, will produce the
series says he is excited to bring top-name entertainment to the Pigeon
Forge area. “This year we have many audience favorites returning, as
well as a few artists taking our stage for the first time. It is an
honor to welcome these legendary entertainers to Pigeon Forge. We love
working with these artists who not only deliver a great show, but also
still enjoy performing for their fans. All of them bring a very special
evening of music.”

In addition to Tucker and The Bellamy Brothers, the concert series
will include Gene Watson and Jeannie Seely on May 27, T.G. Sheppard and
Ronnie McDowell on June 23. Of special note will be appearances by two
members of the Country Music Hall of Fame – the Oak Ridge Boys, who will
perform a 3pm and 8pm show on September 23, and Jimmy Fortune (of The
Statler Brothers), who will take to the stage on October 15 for a 3pm
matinee show. Friday, October 20, will offer fans a rare chance to see
Mickey Gilley and Johnny Lee – famous for their hits during the Urban
Cowboy era – together for a 3pm and 8pm performance.

Tickets for all shows will go on sale Monday, February 13 at 9am, and
are available by calling 865-453-2003. For more information, fans can
visit www.FirstClassConcerts.com.