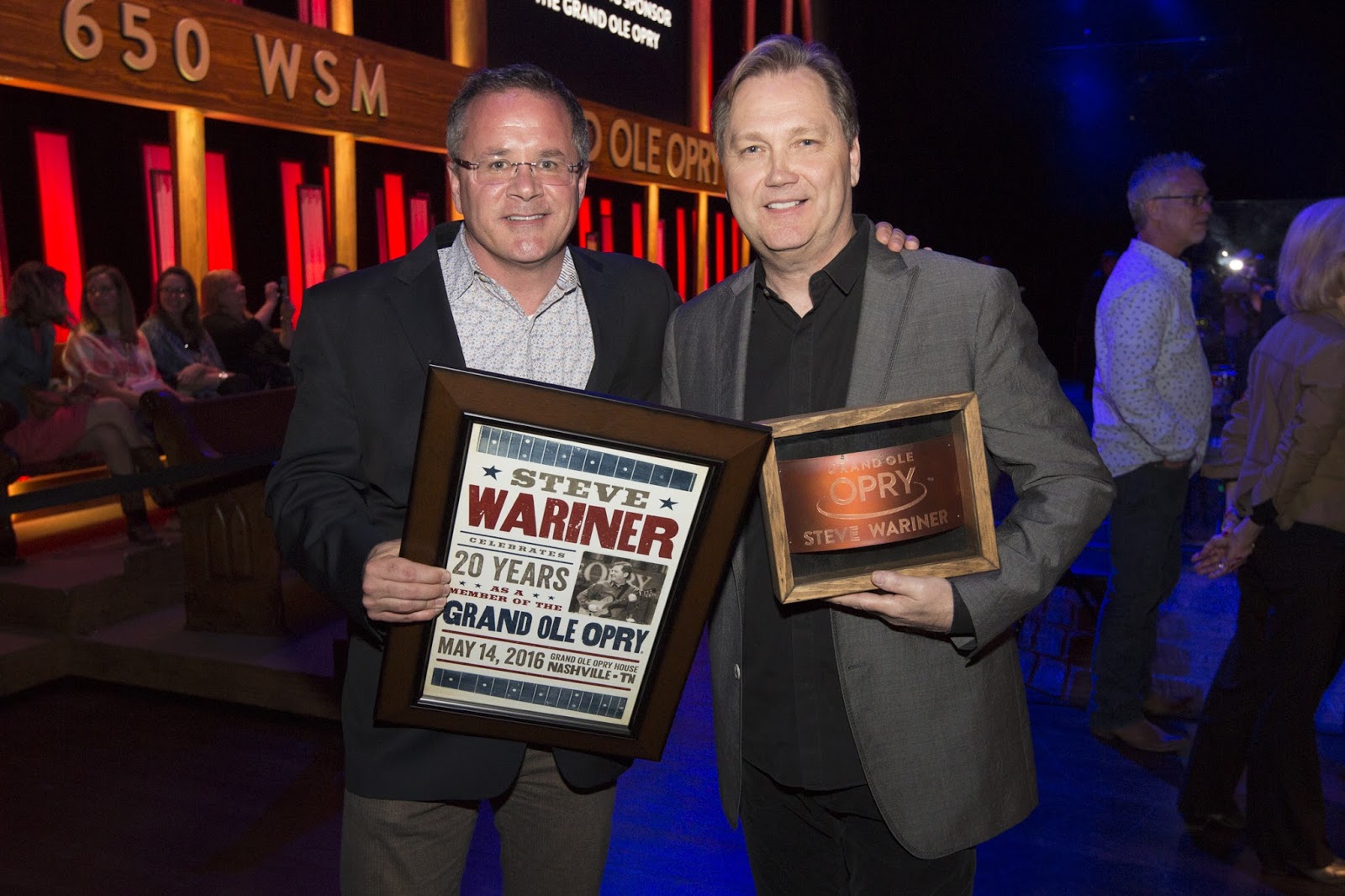 NASHVILLE, Tenn. – (May 16, 2016) – This past Saturday (May 14), four-time GRAMMY and CMA Award winner Steve Wariner celebrated his 20th
anniversary as a member of the Grand Ole Opry. Pete Fisher, Grand Ole
Opry Vice President and General Manager, presented Wariner with a
special plaque during the singer/songwriter’s performance. Country Music
Hall of Fame member Bill Anderson, who inducted Wariner into the Grand
Ole Opry 20 years ago, also was on hand to pay tribute to his longtime
friend.

“Wow! I can’t believe I’ve been an Opry member for 20 years,” said
Wariner. “It’s still one of the greatest honors of my career. I remember
my first time on the Opry in 1973 as a member of Dottie West’s band
back at the Ryman as if it was just yesterday.  It seemed like an
impossible dream back then that I would be asked to join…but it happened
a few years later! Dreams can come true. Glad to call the Grand Ole
Opry my home!”

Earlier in the evening, the Opry threw a backstage party for the ACM
Award winner, complete with a special cake decorated with an
illustration of Wariner’s red telecaster guitar.

The country music legend is currently in the studio working on a new
album to be released later this year.  His next concert performance will
be at City Winery in Nashville on June 11 at 8:00 PM during CMA Music
Festival. The show will be filmed for a future project. Tickets can be
purchased at https://t.e2ma.net/click/gm3ps/s73h3d/ge5tyh.

Wariner has achieved 14 No. 1 songs and more than 30 Top Ten hits,
including such classics as “Holes in the Floor of Heaven,” “Life’s
Highway,” “The Weekend,” “I’m Already Taken,” “I Got Dreams,” “Small
Town Girl,” “Two Teardrops,” “Some Fools Never Learn,” “Lynda,” and
more. An award-winning songwriter, Wariner has also composed songs for
Clint Black (“Nothin’ But the Taillights”), Garth Brooks (“Longneck
Bottle”), Bryan White (“One Small Miracle”), and Keith Urban (“Where the
Blacktop Ends”), as well as artists such as Country Music Hall of Fame
members Alabama, Kenny Rogers, The Statler Brothers, Conway Twitty, and
Don Williams; pop music icon Peter Tork (of The Monkees); R&B singer
Ruben Studdard; bluegrass music’s Del McCoury Band, and many more.
Revered for his guitar talent, he was given the rare status of C.G. P.
(Certified Guitar Player) by his mentor Chet Atkins. For more
information, visit www.SteveWariner.com.