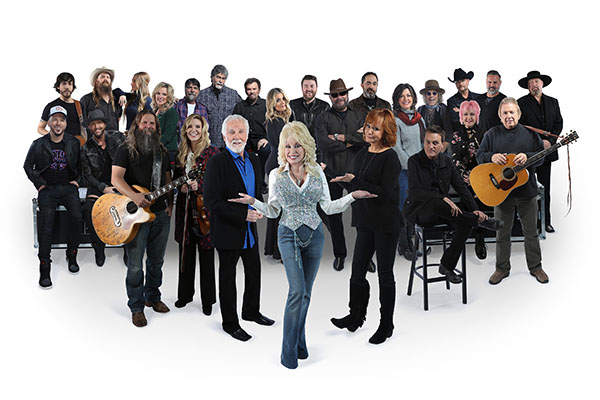 PIGEON FORGE, Tenn. (December 14, 2016) – Millions watched Smoky Mountains Rise: A Benefit for the My People Fund telethon
and millions were raised. The telethon, broadcast on GAC, AXS-TV, RFD
and The Heartland Network Tuesday, received huge donations from music
stars like Taylor Swift, Kenny Chesney, Chris Stapleton, Chris Young,
Paul Simon and Dierks Bentley but also from families across the country
who just want to give the people of Dolly’s home area a hand up in the
tragic wildfires.

“I am overwhelmed by the generosity of the people who have donated
from all over the country and to my friends who donated their time,
their talent, and money for My People,” Dolly Parton explained. “The
response has been so overwhelming that we haven’t been able to count all
of the donations yet; right now, in total, we have raised about $9
million dollars for the folks who lost everything in Sevier County.”

The total amount raised is expected to rise as mail donations are
counted and the telethon is rebroadcast to new audiences over the next
five days.

Anyone who would like to make a tax-deductible contribution to the My People Fund may visit dollywoodfoundation.org.
For those wishing to send donations via mail, those contributions
should be sent to: My People Fund, c/o Dollywood Foundation, 111
Dollywood Lane, Pigeon Forge, TN 37863. Donations are also being
accepted by texting DOLLY to 501501 for a onetime $10 donation or
DOLLY25 to 501501 for a onetime $25 donation. Messaging and data rates
will apply.

More than 1300 families have been displaced due to the wildfires
which spread across Parton’s home area of Sevier County, Tennessee in
late November. The entertainment icon established the Dollywood
Foundation My People Fund to provide $1000 each month for six months to
every family who lost their primary residence.

Smoky Mountains Rise was also simulcast across multiple radio chains,
including iHeart Media’s digital and select on-air platforms, Cumulus
Media’s NASH Nights LIVE, TuneIn’s Country Roads channel, RURAL Radio on
SiriusXM plus cross-promotion on The Highway, Prime Country, Y2Kountry
and The Garth Channel, CBS Radio, ABC Radio Networks, and several other
platforms which are set to be announced shortly. All of the artists are
donating their performances to help the effort. USAToday.com
and USA Today National Networks live streamed the telethon on their
affiliate newspaper websites, including all Tennessee newspaper sites Tennessean.com, Knoxnews.com, commercialappeal.com, jacksonsun.com, theleafchronicle.com, dnj.com, and others.

The My People Fund will provide $1000 each month to Sevier County
families whose homes are uninhabitable or were completely destroyed in
the recent Smoky Mountain wildfires. Any family who lost their primary
residence (renters and homeowners) due to the wildfires in Sevier County
will be eligible. A pre-application for those affected is available at dollywoodfoundation.org.

About The Dollywood Company:
A highly-awarded and widely-recognized leader in the amusement
industry, The Dollywood Company consists of the 150-acre Dollywood theme
park; the 35-acre Dollywood’s Splash Country; Dollywood’s DreamMore
Resort; and Dollywood’s Smoky Mountain Cabins. As unique as its namesake
and owner Dolly Parton, Dollywood is the 2010 Applause Award winner,
the theme park industry’s highest accolade; winner of nearly 30 Golden
Ticket Awards; and recipient of 25 Brass Ring Awards for Live
Entertainment (more than any other theme park in the world). In 2014,
Dollywood was named a top three US theme park by USA Today and TripAdvisor
recognized Dollywood as a top 20 worldwide theme park in 2015.
Dollywood is open nine months a year (late March through early January)
and offers rides and attractions, shows, and a dozen crafters authentic
to the East Tennessee region. Dollywood’s Splash Country, recognized by
the Travel Channel as one of the country’s most beautiful waterparks and
named 2009’s Must-See Waterpark by the International Association of
Amusement Parks & Attractions, operates from Memorial Day to Labor
Day. The 300-room Dollywood’s DreamMore Resort provides guests
spectacular mountain views and family-friendly amenities next door to
Dollywood theme park and Dollywood’s Splash Country. Dollywood’s Smoky
Mountain Cabins offers luxurious cabin accommodations overlooking
Dollywood. For more information, call 1-800-DOLLYWOOD or visit dollywood.com. Operating days and hours vary.