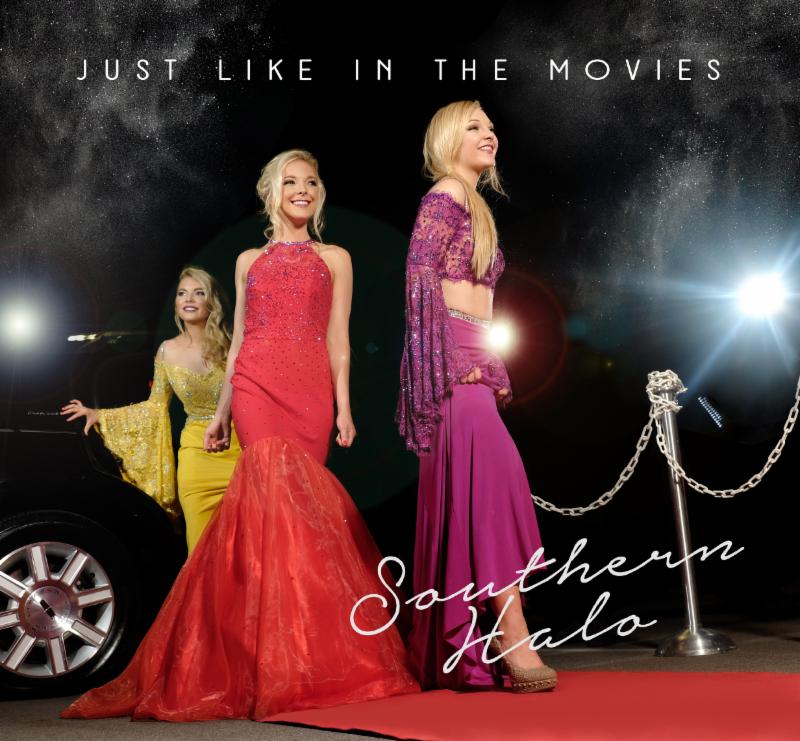 Nashville, TN (March 9, 2018) —SOUTHERN HALO‘s story arc expands with the April 27 release of their latest CD, the concept-driven, dream-inspired JUST LIKE IN THE MOVIES. This
14-track package, produced by Catt Gravitt and Gerald O’Brien, mirrors
the emotional and musical growth of Natalia, Hannah and Christina
Morris, the three sisters from the Mississippi Delta who form SOUTHERN
HALO. 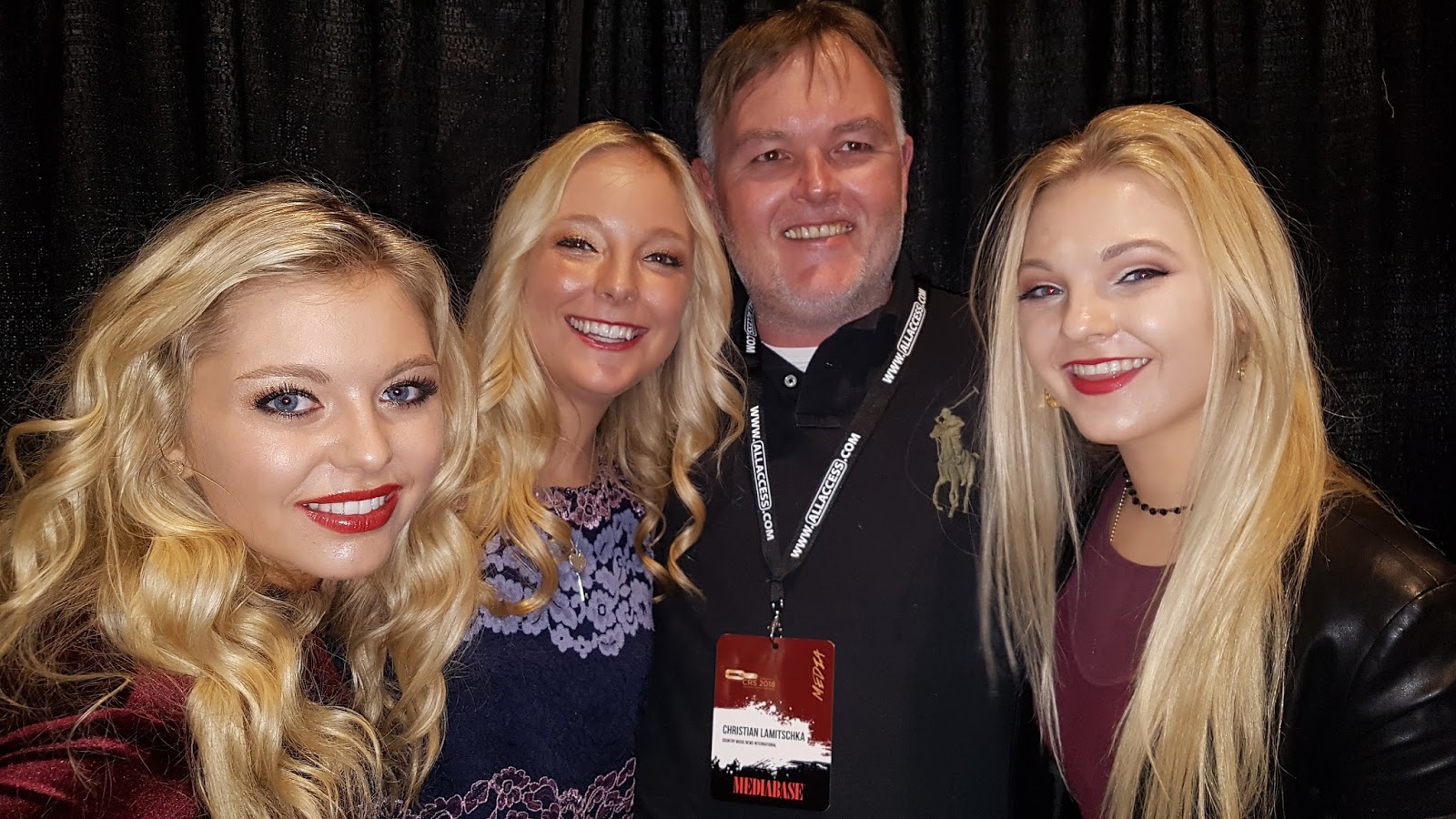 Inspired by a dream of Natalia’s, JUST LIKE IN THE MOVIES
features 10 songs written or co-written by the lead vocalist/guitarist,
and four titles from Music City’s hottest tunesmiths. The catchy ode to
the glories of Southern womanhood, “Southern Halo,” kicks off
the project and marks the first “scene” of this movie-made-music.  A
co-write with Roxie Dean, the strong, multi-layered vocals and
sing-along chorus make this a natural choice for the first “instant
gratification track” offered with each  iTunes and Amazon pre-order of the CD.  The disc is the second outing for the trio with SESAC’s 2012 Writer of the Year Catt Gravitt (Kelly Clarkson, Jake Owen) and Gerald O’Brien (Martina McBride, Trace Adkins) at the helm.

Continuing the album’s theme is the first single “Anything Is Possible.”
Written by Gravitt and award-winning songwriter/producer Carl Falk, the
hooky, upbeat track is a veritable anthem to the power of positive
thinking and is already resonating at Country radio.  A lyric video,
featuring performance footage, can be seen on YouTube.

JUST LIKE IN THE MOVIESexplores the excitement found and challenges faced when chasing one’s
dream.  The eagerness to experience new places is offset by the longing
for the constant comforts of home, while the idea that anyone can indeed
reach for the stars is reinforced.  Natalia, Hannah and Christina
continue to prove that dreams do come true – if you work hard and
believe.  Highlights abound, and the tracks range from Rock-ish (“My Girls & Me”) to beautifully poignant (“Not Today”) to confrontational (“Hey Boy”).

The
album’s title track is a Pop/Rock-infused, modern-day fairytale that
features underscored Rap-style background vocals and a sultry yet
whimsical feel.  Written by Gravitt, Jana Kramer and Brian Kierulf, “Just Like In The Movies”
showcases SOUTHERN HALO’s diversity and their fearless approach to
music.  The track was singled in the U.K. late last year and enjoyed
enormous success.

“Missing Mississippi,” written by Natalia and Jennifer Adan,
slows things down with the true tale of Natalia’s first night in her
new Nashville home.  Sweet, reflective and emotional, the song shows
that sacrifices are always made in pursuit of the dreams that inspire
us.  Another track that shines the light on leaving, “Famous”tells the tale of the loneliness that can surround stardom.  Penned
with Alex Dooley, the message is deep – and partially hidden by a
seductive melody.  “Tom Girl,”written with Melissa Boella Rowe, describes a character familiar to the
Morris sisters: someone who loves to get their hands dirty, but also
loves to dress up for special occasions.  As Natalia says, “everyone
talks about ‘tom boys’ or ‘girly girls’ – no one ever talks about ‘tom
girls.’  Christina loves fishing while Hannah rides horses and I enjoy
building projects in our backyard, but we love to get prettied up for a
night out.  We’re all ‘tom girls.'”

Tom girls they may be,
but Natalia, Hannah and Christina are all driven by the same dream.
Music inspired SOUTHERN HALO; now their songs are inspiring young
Country fans everywhere.  Drummer Christina
and bassist Hannah are still in their late teens, and Natalia just
recently crossed over into her early 20s.  They’re exploring,
challenging themselves to take risks and raise their bar – and JUST LIKE IN THE MOVIES proves they have reached new heights – and they are proud of it.  This new albumis
poised to follow the phenomenal success of their previous, eponymous
CD, and is sure to bring new listeners to the fold as it breaks new
ground for the trio.

I Think Too Much

It’s Always Been You

Since their hypnotically-upbeat Country radio debut, “Little White Dress,” caught the attention of U.S. radio and press (spending eight weeks at #1 on the International Hotdisc Chart) this sibling trio has broken down doors and shattered glass ceilings.  Their sophomore single, “Rewind,” was a U.S. Top 40 MusicRow CountryBreakout™ Chart hit that also held the #1 spot on the Hotdisc Chart for two weeks.  The group’s third single, “Living Like That,”
quickly found success of its own, and further bolstered the trio’s
profile.  It’s been a fast ride to the big stage for these Delta
darlings.  Since landing in the National Finals of the 2014 Texaco Country Showdown as the youngest competitors ever, the band has opened for Maren Morris, Deana Carter, Love and Theft, Brantley Gilbert, Eric Paslay, Tyler Farr, Parmalee, Old Dominion, American Young, Blues
immortal B.B. King and legendary chanteuse Dionne Warwick, among many
others.  The Cleveland, Mississippi natives have performed at the CMA
Music Festival, at a pre-show on the rooftop terrace of the Grammy
Museum in Los Angeles andlaunched Townsquare Media’s “Say It With Pepsi” Concert Series.