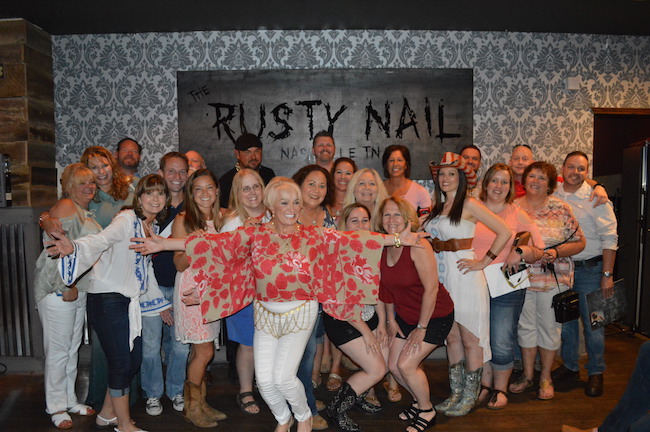 Renowned sports
bar & grill, The Rusty Nail, has acquired SOUTH on Demonbreun
effective immediately. Assuming all ownership and managerial roles, The
Rusty Nail has already begun to make improvements, including a revamped
staff and several design renovations that consists of a bigger stage,
larger seating capacity and an all new sound system.

Their first major initiative was to bring in country music icon Tanya Tucker, who hosted an exclusive Sunday Brunch to a capacity crowd of her most loyal fans.

During
the event, co-hosted by StarPro Public Relations, fans enjoyed a savory
brunch buffet while mingling with Ms. Delta Dawn for a uniquely
intimate experience. During the brunch, Tucker visited each table and
shared stories with her fans all while dining on some delectable
southern specialties.

“It
makes us feel great as entertainers to have this opportunity to say
hello and meet the people who make it all worth it,” Tucker said to the
crowd. “It was such a special event for me and I want to thank everyone
who came out and made it possible.”

The
country music icon took time to FaceTime with fans that couldn’t attend
the special event and even went on to sing Happy Birthday to others.

“This
is an amazing opportunity for The Rusty Nail,” says Roger Miller, the
new COO and General Manager at The Rusty Nail. “Our company has stepped
in with a full understanding of the challenges that are attached to the
SOUTH brand and our team is committed to the revitalization of this
Nashville staple.”

In
addition to the highly successful brunch, The Rusty Nail hosted over 40
bands throughout the week including a special performance by Curtis Braly with country music star Jamie O’Neal in addition to an American Idol/The Voice showcase featuring past contestants Paul Jolley, Vincent Powell, Megan Miller among others.

Now
with two locations, The Rusty Nail is proud to serve the greater
Nashville area and is dedicated to the community it is apart of.