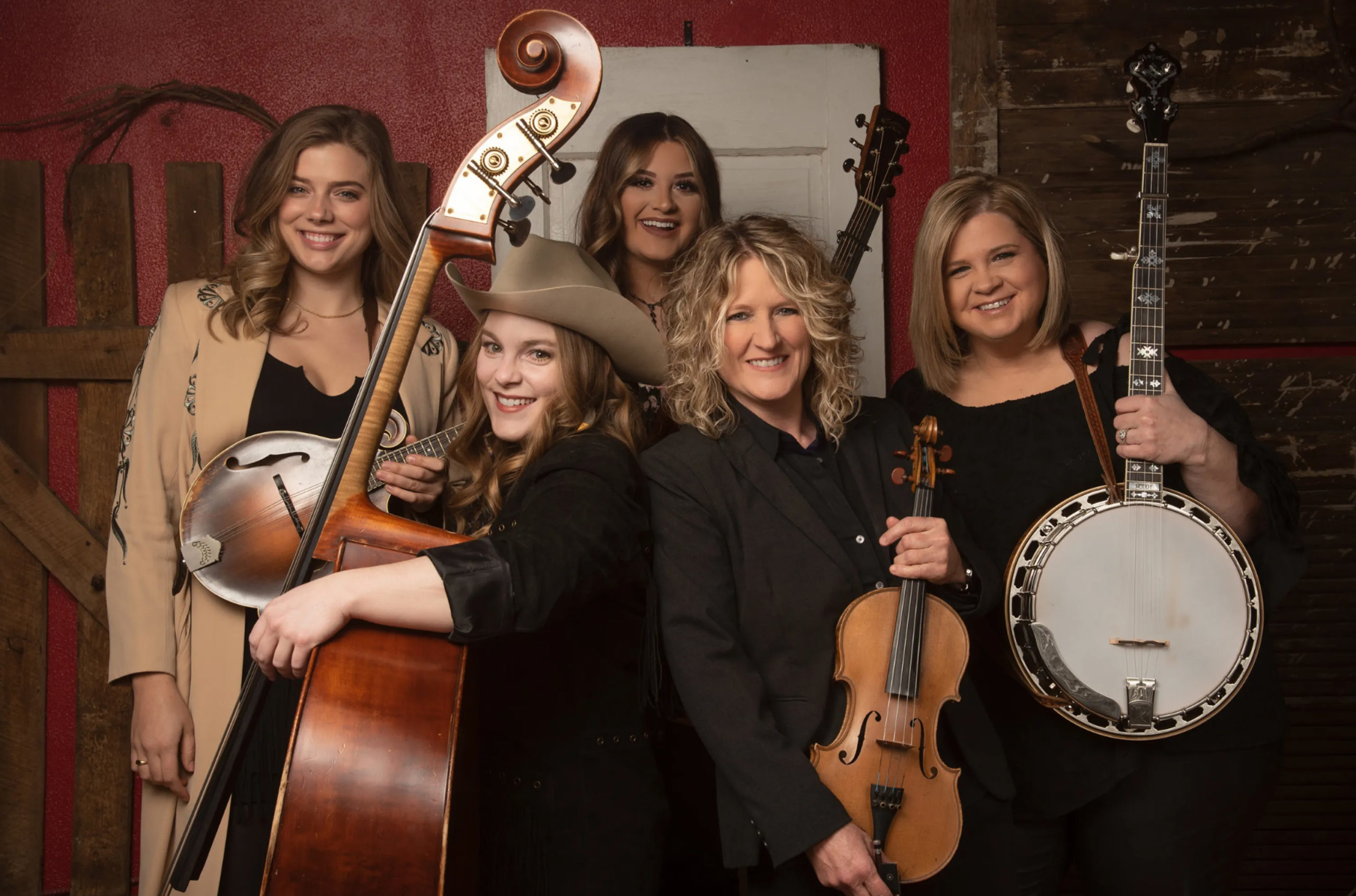 Sister Sadie, which launched in the wake of an ostensibly one-off show at Nashville’s World Famous Station Inn in 2012, has both embraced and transcended its all-female identity, earning acclaim that includes being named as the International Bluegrass Music Association’s Entertainer of the Year in 2020, as well as Vocal Group of the Year in 2019, 2020 and 2021. Members range from acclaimed veterans to rising newcomers, who have won individual recognition, too, with founding member and fiddle player Deanie Richardson named as Fiddle Player of the Year in 2020 and banjo player/vocalist Gena Britt — SPBGMA’s reigning Banjo Player of the Year — having participated in three award-winning collaborative projects.The lineup is rounded out by 2021 IBMA Momentum Vocalist of the Year and Mountain Home recording artist Jaelee Roberts (guitar), in-demand bassist Hasee Ciacco (Molly Tuttle, Laurie Lewis & the Right Hands).

Deanie Richardson: This band formed as a group of women who had been friends who had played on and off together in different configurations  throughout our lives.  We had the idea to play a night at the Station Inn in Nashville, TN for a one time show just for fun.  It was such a blast and the feedback was phenominal.  We started getting calls to play other shows so we decided to do a few.  A few lead to more and then a record and then a Grammy nomination.  It just started growing organically.  From the first note we all played together we knew this was something very special.  If I had to describe this band I would say we are five strong, talented women playing hard driving and energetic music with some of the best vocals and insrtumentation you’ll hear.  We give 150% to every performance and our shows are full of excitment. It’s a mixure of bluegrass and country and just great songs that we all love.

Deanie Richardson: We have all of the creative control.  That’s amazing and very hard.  When you have 5 women with 5 differnet musical and creative taste it can be hard to navigate through that creative space.  We work hard to inculde and be fair to everyone involved.  It’s a fun process when everyone is excited and on board to learn and arrange new songs.

Deanie Richardson: We do write some of our songs and also reach out to some of our favorite songwriters when we are searching for tunes.  We are currently working on a new project and have a mixture of self penned songs as well as those of others.  We have so many amazing friends in the buisness.  When we are looking for materail some of the ones we reach out to are Ronnie Bowman, Becky Buller, Don Schlitz, Jeannie Seely, Shawn Camp, Dani Flowers, Marla Cannon-Goodman, Jerry Salley and many others

Deanie Richardson: I love playing live shows.  I thrive on that energy of the audience and the other ladies that I’m on stage with. There is no other feeling like that of a high energy audience and all of us on stage merging with that energy.

Deanie Richardson: I have so many inspirations.  I grew up with grandparents that played so I’d say those were my first inspriations.   I’ve been so blessed to have played with many great artist such as Patty Loveless, Holly Dunn, Vince Gill, The Chieftains, Bob Seger and Sister Sadie to name a few.  Each of these artist have inspired me and taught me so much.  I love all genres of music. If it’s good and moves me to either dance, cry, reflect or dream then I love it!!!   Being a fiddler I have many fiddle heros.  Those include Kenny Baker, Bobby Hicks, Tommy Jackson, Mark O’Connor, Stuart Duncan, Jason Carter.  There’s so many!!!!  I might listen to Kenny Baker playing a fiddle tune one minute and then Bonnie Riatt the next.  My playlist is a wide variety of styles and genres that make me feel.

Gena Britt: I think the greatest challenge I’ve faced in the music business is being a band owner, and keeping the musicians in your group happy and working together for the good of the band, and not for individual gain. When working as a true band, everyone should have the same goal & that is to make the band as a whole be the very best it can possibly be.

Gena Britt: I think performing on the Grand Ole Opry stands out as one of the highlights of our career.  When we stepped ino the circle on that stage for the first time as a band, it was one of the most surreal moments of my life.  It was an accomplishment that I’m very proud of….standing there were all our heroes had stood before us. Another highlight was our Grammy nomination in 2019.  Another surreal moment that we got to experience in Los Angeles. I’m sure none of us will ever forget how that felt and to have that acknowledgement from our peers.

Gena Britt: What I love more than anything during my time off is spending down time with my family.  Just catching up on a deeper level of how they’re doing, what I can do for them or just watching movies & tv at home.  That’s my favorite place to be.

Gena Britt: I think the best compliment I’ve ever been given is that I’m appreciate for taking the time to connect with my fans and have a genuine desire to learn more about them.  I think it’s important to learn who your fan base is and know who you’re performing to.  I know it’s cliche, but if it weren’t for them, we wouldn’t have anything to do.  So, I’m very appreciate of the fans & want to make them feel appreciated in return.

Gena Britt: Yes,  We have a band website www.sistersadieband.com and folks can find information such as all of our individual bios, our tour schedule, our sponsorships, and how you can book us for your venue.  There’s also lots of cool pictues on there as well as links to our individual pages.