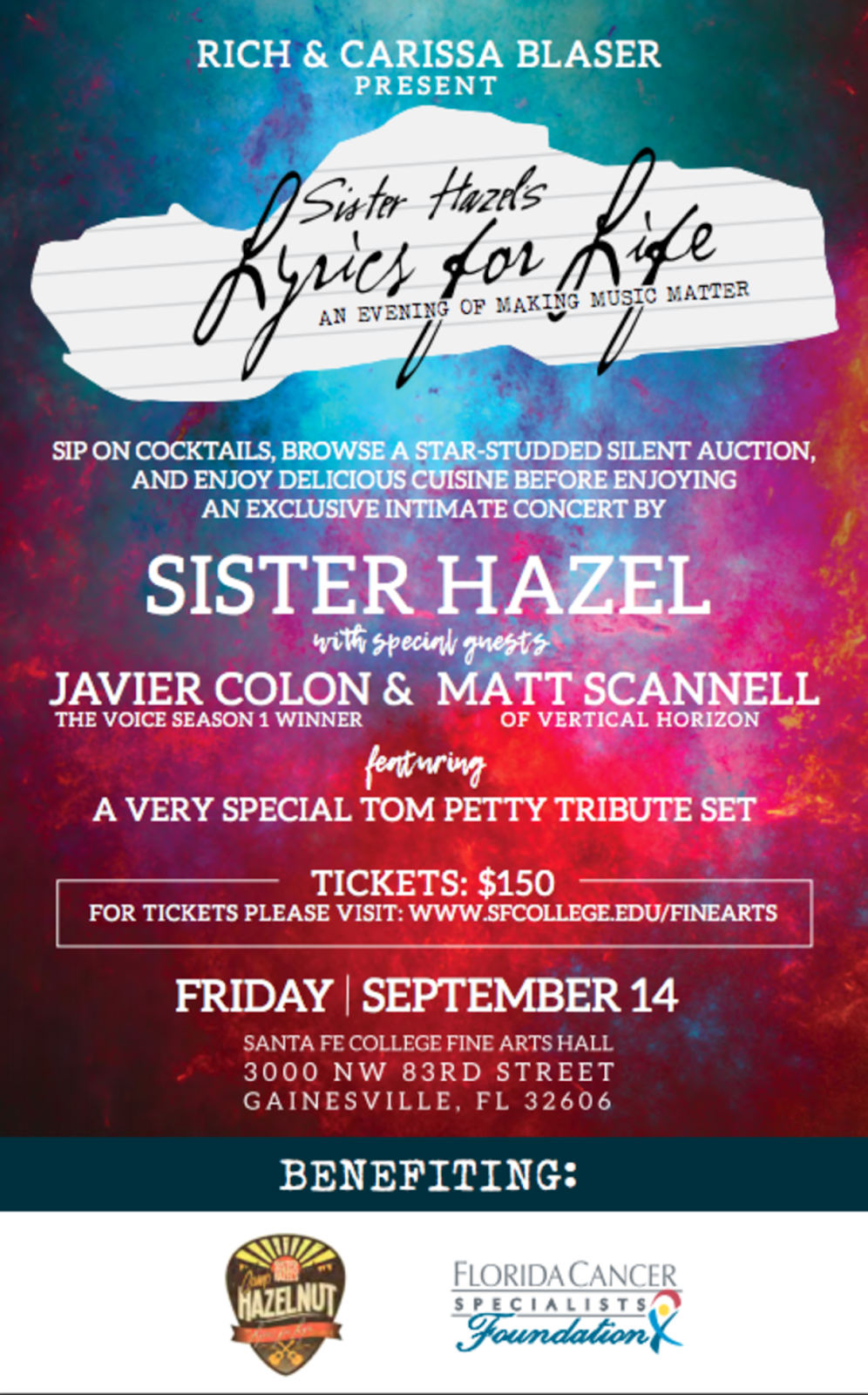 Platinum-selling band, Sister Hazel, is set to host the 2018 Lyrics for Life in their hometown of Gainesville, FL on Friday, September 14. Presented by Rich and Carissa Blaser, the
evening event will raise funds for the non-profit charities Lyrics for
Life’s Camp Hazelnut and Florida Cancer Specialists Foundation as well as with all Lyrics For Life events, STOP Children’s Cancer in Gainesville, FL. Attendees
will enjoy cocktails and heavy hors d’oeuvres as they browse a
star-studded silent auction, featuring items from some of the music
industry’s biggest names. There will also be special guest performances by Javier Colon, The Voice Season one winner, and Matt Scannell of Vertical Horizon. Tickets are $150 and available here.

Lyrics
for Life has donated approximately $250k over the years to
Gainesville’s STOP Children’s Cancer Charity. They have also benefited
other Cancer Charities around the country including Children’s Cancer
Center of Tampa and Camp Sunshine in Atlanta. In 2017, the event raised
over $200,000 for Florida Cancer Specialists Foundation and Lyrics for
Life’s annual Camp Hazelnut Event.

Originating
from Gainesville, FL, Sister Hazel is comprised of five gifted,
seasoned musicians whose well-spring of natural talent has been called
“one of the Top 100 Most Influential Independent Performers of the last
15 years” by Performing Songwriter Magazine. Song “All for You”
topped the adult alternative charts during the summer of 1997 and the
success propelled their album to platinum status. In their first showing
on the country music charts they made a strong debut with “Lighter In
The Dark” at #4 on Billboard’s Top Country Albums chart, #6 on Billboard’s Independent Albums chart, #30 on Billboard’s Top Current Albums chart and #79 on the Billboard 200 album chart. The band landed on Billboard’s Top
Country Albums Chart again in 2016 with “Unplugged From Daryl’s House
Club” at #75. In 2018, “Water,” Volume I of a collectible compilation
series titled, “Elements,” landed on the Billboard Country Albums chart at #9 and at #2 on Billboard’s Independent
Albums chart along with making their debut on the most revered stage in
country music, the Grand Ole Opry. Living up to their fan-centered
reputation, the band was a pioneer in the themed cruise industry by
co-founding “The Rock Boat” and annually hosts events like the “Hazelnut
Hang,” and “Camp Hazelnut” that focuses on creating unique experiences
and interacting with the fans. Sister Hazel has been equally attentive
to connecting with their audience through social media having amassed
over a million social followers. In addition to the events and touring,
the band also gives back with “Lyrics For Life.” Founded by singer Ken
Block, the charity unites musicians and celebrities for concerts and
auctions to benefit cancer research and patient-care charities.

About Lyrics For Life:

Lyrics
For Life is a 501(c)3 non-profit organization whose mission is to make a
difference in the fight against pediatric cancer. Sister Hazel
frontman, Ken Block, and his band mates founded Lyrics For Life in
memory of Ken’s younger brother, Jeffrey, who ultimately lost his
four-year battle with cancer that started at age 14. The
charity unites musicians and celebrities for concert events, auctions,
and other fundraising efforts. The monies raised are donated to groups
that are working to find a cure, as well as those aiming to enrich the
lives of patients and their families. From research to summer camps and
family support groups, we are surrounding this disease and conquering it
from every angle. Artists participate in many ways, often
by donating handwritten lyrics to one of their songs on anything from a
simple sheet of paper to a surfboard to some other unique item, which we
offer for auction at one of our Lyrics For Life events. Our
team of musicians, volunteers, sponsors, and supporters set high goals
for the future. We accept the challenge to find new ways of raising
money and awareness and to help make each day a little brighter until
there is a cure.  http://www.lyricsforlife.org/

Decades
of familiar, happy faces cover the walls in the dining hall of Camp
Crystal Lake outside Gainesville, FL. Kids around the U.S. have been
spending summers there for as long as anyone can remember, so when the
Camp’s Director, Scott Burton, got word to the band that he would love
to collaborate on an event, everyone loaded up the car and headed out
for a visit. The conversation started simply as a family-focused
Sister Hazel fan event—a weekend “summer camp” retreat with activities,
bonfires, cabins, and, of course, music. When Sister Hazel decided to
also invite some regional kids with cancer and their families, the idea
took on a whole new meaning, and the weekend turned out to be far more
powerful than anyone first imagined: so much so, that they decided to
center future Camp Hazelnut events around these special kids and
families. The
Camp Hazelnut goal is simple: create a playful, safe, uplifting
experience for kids and families navigating the overwhelming challenges
of a cancer diagnosis. It’s a place to simply get away and come
together. The campers embark on a great exploration to discover (or
rediscover!) the magic that can only be created at summer camp, and the
band is right there alongside them every step of the way, leading
activities, playing acoustic campfire sing-alongs, sharing, giggling,
and having a blast. http://www.lyricsforlife.org/camp-hazelnut

The
Florida Cancer Specialists (FCS) Foundation was founded in 2011 by a
group of Florida Cancer Specialists partner physicians who recognized
many patients struggle with everyday living expenses while undergoing
cancer treatment. They believed no one should choose between paying
bills and receiving cancer treatment. The FCS Foundation provides
financial support to qualified cancer patients and their families for
expenses such as rent or mortgage, car payments and utility bills. By
giving patients peace of mind in knowing that their bills are being paid
while they are undergoing treatment, we allow them to concentrate on
what really matters fighting cancer and getting well. Non-medical,
financial aid from the FCS Foundation is available to Florida residents
18 years of age or older who are receiving cancer treatment from a
Florida oncologist. Recipients must have a household income at or below
200% of the national poverty guidelines. 100% of donations received go
directly towards paying the essential living expenses of someone with
cancer.