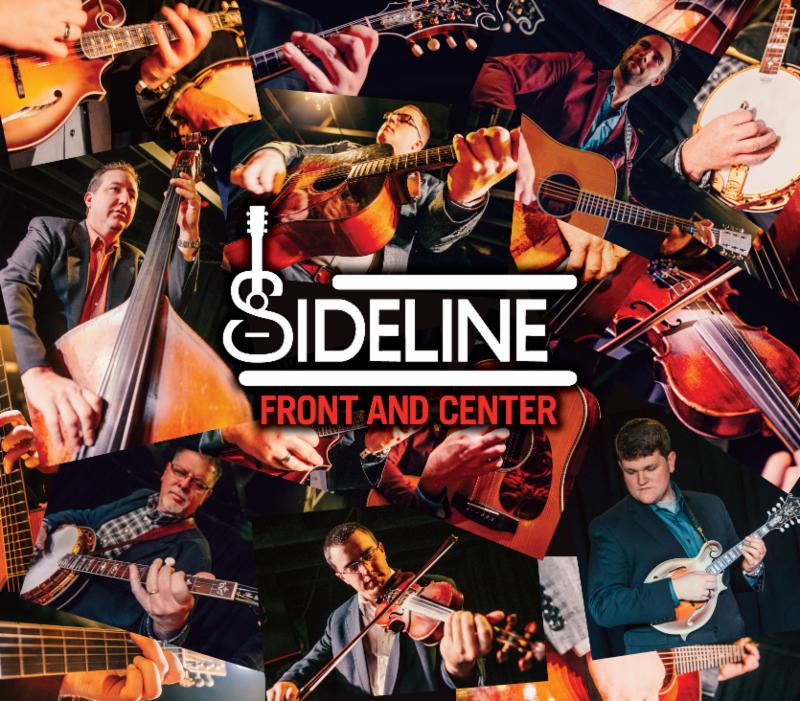 Nashville, TN (March 26, 2018) —SIDELINE’sdynamic first album for Mountain Home Music Company, FRONT AND CENTER, is set for April 27 release.  A live,streaming appearancetomorrow at 8:30 a.m. Central on 650 AM WSM’s Coffee, Country & Cody show (simulcast onHeartland TV) leads the launch efforts.  There’s plenty to promote – this is the real deal; heart and soul Bluegrass, tightly woven from unbreakable threads of talent and commonality.  FRONT AND CENTER marks the group’s first outing with respected producer Tim Surrett at the helm, and each of the project’s 12 tracks fits snugly into the revered Carolina ‘Grass style.

The reflective “Frozen In Time”
offers a poignant look back at the past with Bailey bringing the warmth
of a Southern summer to the lead vocal with recollections of mama’s
laughing, daddy’s banjo and the joys of sweet corn.  He’s joined by Troy
and Steve on tenor and baritone harmonies, respectively.

The tempo jumps up with “Old Time Way,”a Saturday-night-feeling, pickin’ free-for-all sing-along that vibrates
with energy and good times.  Steve’s iconic upbeat banjo roll drives
this celebration of hoedowns past and present, while lead vocalist Troy
trades some fun and fancy maneuvers with background vocalists Bailey
(tenor) and Steve (baritone).

Skip eases the listener ever-so-gently into the quiet contemplation of Gordon Lightfoot’s“Song For A Winter’s Night”with a masterful touch, while Steve offers up outstanding ethereal
tenor harmonies on this interpretation of the Tony Rice hit.  With no
banjo, this quiet ballad creeps slowly into the heart as it captures the
loneliness and soft, sweet sadness of a solitary winter’s evening.

“Bluefield WV Mtn. Girl”
finds Bailey back on lead, singing about bright memories of a special
girl and the mountains she calls home. SIDELINE’s brilliant four-part
harmony is featured on one of the project’s two Gospel songs, “I Long To See His Face.”  This mid-tempo is enough to make even the casual listener shout “hallelujah.”

Reckless, irreverent and full of dangerous charm is “Lysander Hayes.”  A
galloping clawhammer sets an expectant groove that pulls the listener
forward, while a chopping guitar adds a feel of suspense.  Gambling, bad
debts and a devil-may-care attitude are at the forefront of this dark
tune.

The ballad, “Memories That We Shared,” the up-tempo “Something Out Of Nothing,” the mid-tempo drive “All Because Of Me,” and the Gospel song “Satan’s Chains” are reason enough to give FRONT AND CENTER a listen.  Add the vibrant, seat-of-your-pants, joy-of-life spin put to “Cotton Eyed Joe” and you have an album for the ages.

Song For A Winter’s Night

I Long To See His Face

Memories That We Shared

Something Out Of Nothing

All Because Of Me

A
pedigreed six-piece powerhouse that has set the pace in Bluegrass for
over two decades, SIDELINE was founded by Steve Dilling (banjo), Skip
Cherryholmes (guitar) and Jason Moore (bass).  The three have all made
historical and significant contributions to the genre as members of
highly-awarded groups, with multiple Grand Ole Opry appearances, and
years of global touring behind them.  What started as a side project for
these seasoned players soon expanded as the core members were joined by
Bailey Coe (guitar) and Troy Boone (mandolin).  Newcomer Daniel Greeson
replaced longtime bandmember Nathan Aldridge on fiddle in 2018.  With
songs that range from pulse-pounding barn burners to those sung from the
heart, this sextet brings perfected timing and dynamic – as well as
visceral emotion – to their music.  With three previous successful album
releases, audiences have found that whether live or recorded, the group
moves easily from well-chosen, neo-traditional covers to new material
curated with a holistic sense of identity and mission.  Add their
on-stage energy and powerful harmonies to the mix, and you have the best
of the revered Carolina ‘Grass sound.