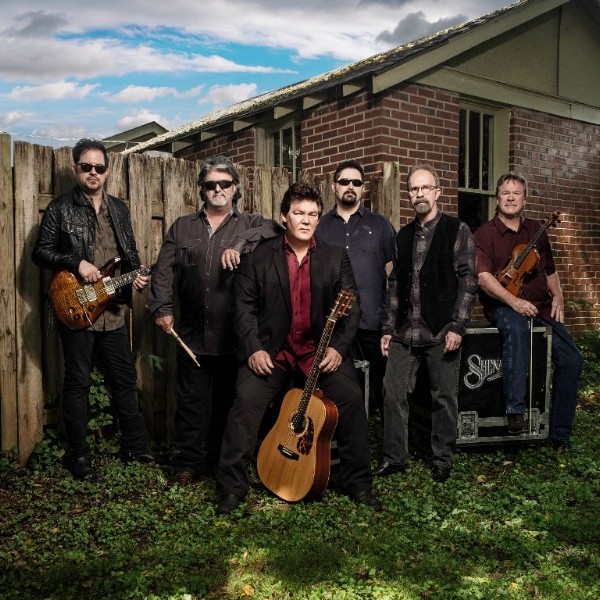 As I sat down with Marty Raybon and Mike
McGuire, it was hard to believe that Shenandoah are celebrating thirty years of
a career that gave us hits such as “Two Dozen Roses”, “Church on Cumberland
Road” and “Next to You, Next to Me” among others.  They are known for their matchless harmonies
led by frontman Raybon, and founding member McGuire.

Even harder to believe: it’s been twenty years
since Shenandoah released a country album.
That all changes with RELOADED, available everywhere March 16.  The new album, released by BMG, marks a new
chapter in Shenandoah’s storied career.

Shenandoah are known for their dynamic live
shows and the new album contains nine of the band’s best-loved tunes recorded
live while on tour in 2017. RELOADED also includes three brand new bonus tracks
produced by Jay DeMarcus of Rascal Flatts.

I caught up with Mike McGuire and Marty Raybon in Nashville a few days ago to talk about
their decades-long career and the album.

I started by reminding them that its almost
thirty years since Shenandoah received their first CMA Awards. Now, years
later, they are still being told, ‘You guys are the reason I got into
music.’  I wanted to know how that
made them feel.

Marty responded, “It’s really a special
feeling, any time you hear anyone make a comment like that.  I remember how it was. We had a single out,
and we said, ‘You know what? We got a show and we’re gonna be opening for
George Jones!’ or ‘We’re gonna be opening up for Merle Haggard!’ It would give
you the opportunity to be able to visit with them and tell them how you felt
about them and what their music meant to you.

“Nowadays,” he added, “you watch Aldean and
Luke Btyan and Miranda Lambert get up and sing ‘Sunday in the South’ and you
hear [artists] doing ‘Ghost in This House’ and ‘Church on Cumberland Road’ on The
Voice and you get to meet them.  It’s
actually flattering. It’s certainly a respectful thing, because I know that when
I had the opportunity to tell Merle Haggard and George Jones the same thing at
different times in different venues, it was certainly coming from the approach
of gratitude because someone had literally moved and changed my life to the
point that I truly appreciated that.”

I asked them to sum up, in one word, what
it was like, working with Jay DeMarcus on the new album.

I asked Mike how it came about, Jay
producing the new songs.

“Jay called me,” said Mike.  “He’d heard that Marty had rejoined the band
after being gone for 17 years and he called to ask me if it was true. I said,
yeah, it’s true. He’s been back for a few months now. So he said, ‘Look, I’m a
huge Shenandoah fan and so are the other guys in Rascal Flatts.  I’d love to take you guys in the studio and
record some stuff and try to get a deal for you guys.’  He said that the first song they ever sang
together as Rascal Flatts was ‘Church on Cumberland Road’ and that was our
first number one.

“So anyway, we figured out a time when we
could come to Nashville. We were looking for songs and we went to ASCAP one
day. Actually, we stayed there two days. We probably listened to three or four
hundred songs. We picked five songs and took them over to BMG and they really
liked what we had. They asked how we’d feel about putting those songs on the
album but also including a live recording.

“We’ve always wanted to do a live record,
even back in our early days, so that worked out perfect for us. So not only
were we going to be able to release new music that was recorded in the studio,
we were finally going to record a live album and include that on this album as
well.”

I said that one of the album’s new songs,
‘That’s Where I Grew Up,’ is an intense story song.  I asked if they’d known who the writers were
and what was their first reaction on hearing this drop-to-your-knees ballad.

Marty smiled and said, “I knew good and
well, when I heard it for the first time, that was Neil Thrasher, and of course
he was one of the writers. [Note, Neil’s co-writers on the song were Ashley
Gorley and Kelley Lovelace.]  The
first time I heard it, I thought, man, this is one of those kind of songs that
make an album a great album.  When Jay
DeMarcus asked us what we wanted to do as far as direction, where we wanted to
go with it and stuff like that, the one thing we’ve always truly felt about our
career and the success that we’ve had, was a lyric-driven song that painted a
picture and told a story, that was positive.
This song had all the ingredients. It was a very, very moving song and
all of us realized that, look, if that song moves you to the point of
understanding, then that’s a very emotional song and surely somebody else is
going to feel the same way that you did.

“Really and truly, Preshias, we’re no
different than anybody else when it comes to listening to a song. Someone could
say, ‘I listened to ‘Bridge Over Troubled Waters’ and, I tell you, I think
that’s one of the most incredible songs in the world.’ And I do too. But the
preference is, this is what it says to me. And [they might be] two completely
different stories. But that’s what makes it commercial.  And that’s what this song is, because
everybody, individually, can take themselves back to a certain place in their
life, whether it’s their mom where she’s having you lean up against the wall in
the pantry and she’s putting marks on the wall. Measuring to see how tall you
were at eight years old.  Or whether it’s
a case of beer on a river bank and before it’s all over with, you get yourself
in trouble, you roll your truck, stuff like that, you only made it out with the
grace of God that kept you from dying. Or there’s a stormy relationship with
the one you truly love, you realize that you needed her more than you needed
your selfishness. And that song has every bit of that in there. And it’s a
tremendous song.”

“In
Nashville, Tennessee,” Mike noted, “Every publishing company in town has got
ten songwriters that are real pros that know how to write songs. So when you go
into a meeting looking for the songs for you, every time they play you a song,
it’s always a really good song. They’re pros; they know how to write good
material. But you’re always hoping for that one song that somehow sticks its
head up above the really good songs and that’s the way this song here was. I
remember having the same feeling as we did when they played us ‘I Want To Be
Loved Like That’ the first time, or when they played us ‘Two Dozen Roses’ and
‘Sunday in the South.’ All the big, big hits we had, there was a feeling we had
when we heard them the first time. I remember having that feeling about this
song, so we’re really excited about this song and we can’t wait for the world
to hear it.”

I asked Mike and Marty how hard it was to
narrow down to just the three new songs that are on the album.

“We actually had recorded five,” recalled
Mike, “and the record label only wanted us to put three on the album.”

“That was hard,” said Marty.

Mike nodded in agreement.  “For me, that was the hardest part,” he
said.  “But I have to say this, even back
in our early days, when you hear a song like ‘Sunday in the South,’ there are
no dissenters. Everybody loves it! It’s easy for everybody to vote ‘Yeah’ when
you’ve got a song like that. I think that’s been a huge key to our success.
We’ve always recorded great songs and we like to think we’ve continued that
with this album here. As I said before, you’re always hoping that a great song
sticks its head up above the rest, because they’re all really good, but once
they do… once they’ve stuck their head up, you go, ‘okay, that’s the one right
there.’

“Another thing that was hard, we had maybe
eight or ten songs [on the short list] and there was another ballad that was as
good as this one. Some of our crew guys were like, ‘How did you not record that
song?’ and I said we couldn’t do but one ballad. Which one are you gonna knock
off the list?

I asked them if they considered putting
that song on the album as an extra bonus.

“We would have,” said Mike, “if the label
would have let us.”

I said it would have been another chance to
hear Marty’s ‘honey-soaked’ vocals. “That’s what you are,” I told Marty.
“You’re a honeysuckle.”

Marty laughed and said, “Well, I’ve been
wondering what I’ve been. Now I know!”

‘Noise,’ one of the other new cuts on the
album, is also Shenandoah’s latest single and is currently impacting Country
radio. You can find the single at iTunes and other digital outlets or via the
band’s official website, www.shenandoahband.com.
The website also includes updates and venue additions to The Shenandoah 30th
Anniversary Tour.

Over the years, Shenandoah has chalked up
twenty-six songs on Billboard’s Hot Country Songs chart and thirteen Number
Ones. They’ve also received numerous awards, including ACM Vocal Group of the
Year. Their collaboration with Alison Krauss, ‘Somewhere in the Vicinity of the
Heart,’ won them the CMA’s Vocal Event of the Year and a Grammy for Best Country
Collaboration with Vocals.  RELOADED and
the new single, ‘Noise,’ will keep Shenandoah on the front line of Country
music makers.

3. The Moon Over Georgia (LIVE)

9. The Church On Cumberland Road (LIVE)

“The new music has given flames to embers that
have burned since we started in 1987. It’s been 20 years since our
last recordings. The new music is fresh, up to date and allows us to
continue where we left off. We feel like we still have so much to say when
it comes to music and it gives us the joy of sharing it with country music
fans all over the world.” -Shenandoah lead singer Marty
Raybon.