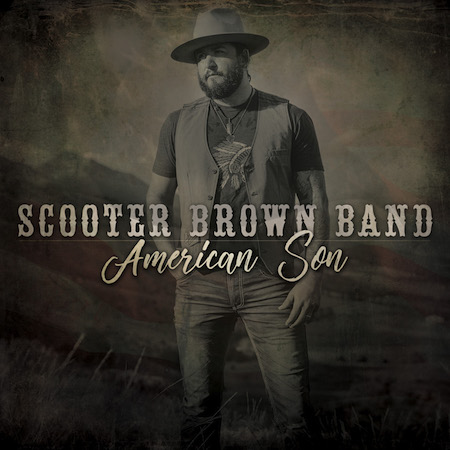 NASHVILLE, Tenn. (October 27, 2017) –  Scooter Brown Band, known
for their own style of country and southern rock music, has released a
music video for their debut nationally-distributed single, “American Son.” The video was directed by Derrek Kupish and can be viewed here. “American Son” features Country Music Hall of Famer and true American son, Charlie Daniels on the track. The album by the same name, American Son, released by Red River / BFD  / Sony Orchard can be found at listeners’ digital retailer of choice through www.scooterbrownband.com.

“The band and I are really excited to be releasing our first music video off of the American Son
album. “American Son” is an anthem of the spirit of this country. The
‘never back down, stand up for what you believe in, never quit’
mentality. I believe this video will speak to a lot of hard working
people,” said frontman Scooter Brown,adding,  “this one goes out to all
the American sons and daughters out there.”

Scooter
Brown Band has been on the road playing for fans around the country
with over 150 shows this year, both headlining and opening for iconic
acts like the Charlie Daniels Band, Travis Tritt, Lee Roy Parnell and
the Marshall Tucker Band.

After
4 years and 3 months, 2 tours overseas with 1 tour of combat in Iraq as
a United States Marine, Scott “Scooter” Brown traded his guns in for
guitars and hit the road. The Scooter Brown Band was formed and began
playing mainly in and around Houston, Texas. Along with their growing
notoriety came their first radio single “Apology.” Other regional radio
releases were soon to follow and include “Whiskey Talkin”, “Soldiers
Christmas Eve”, “Feels Like Home,”, and “Summer Song”. The band has
released a number of independent albums, strengthening their chops in
the studio, however they truly shine in their live show. SBB has toured
the country and opened for some of their biggest influences including
Charlie Daniels Band, Travis Tritt and the Marshall Tucker Band, just
to name a few. For the last year the band has been building a new era in
their career, gearing up for the release of their newest project American Son — defining modern southern rock.