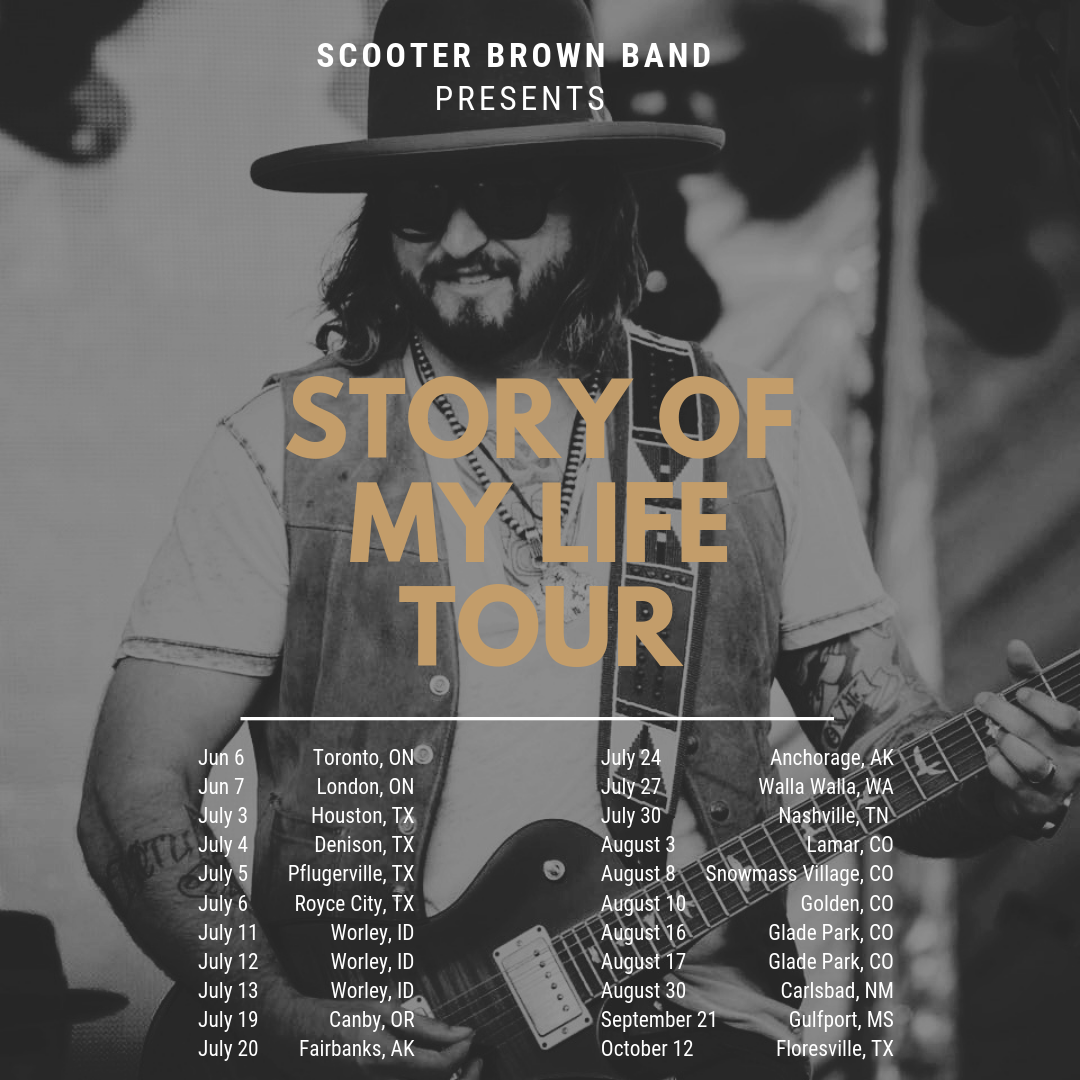 Scooter Brown Band announced their “Story of My Life Tour”
today which includes both headlining shows and dates supporting the
Charlie Daniels Band, Dwight Yoakam and more. The name of the tour comes
from the band’s song “Story of My Life,” a relatable song to the
working man and especially truthful for a touring musician, as they will
be traveling across North America, playing shows in Ontario, Houston,
Anchorage, Mississippi and more. The song, along with the rest of the American Son album, can be downloaded here. The band will make their debut at the historic Grand Ole Opry on Wednesday, July 30 in Nashville, tickets can be purchased here.

“If
you listen to and love country music and its history, then you know that
there is no greater honor and privilege than performing on the Opry
stage. I can count on my hands how many times I’ve cried in the past 20
years. The day Charlie Daniels called to say I’ve been invited to
perform on the Grand Ole Opry is one of them,” said Scooter Brown, “We
are excited to embark on this tour, get out to our fans and friends
across North America and share the stage with some of the best.”

“Man I can’t get right, every town every night,

and wake up on the floor at noon,

if you win it you can let it ride,

Maybe she was right, that’s the story of my life”

“Story of My Life Tour” Dates

You can keep up with all of the band’s tour dates at scooterbrownband.com.

After
four years and three months, two tours overseas with one tour of combat
in Iraq as a United States Marine, Scott Brown traded his guns in for
guitars and hit the road. Scooter Brown Band was formed and began
playing mainly in and around Houston, Texas. They have toured North
America and opened for some of their biggest influences including
Charlie Daniels Band, Travis Tritt, Dwight Yoakam, Lee Roy Parnell and
the Marshall Tucker Band, just to name a few. With two of the members
having served in the military, they dedicate significant time doing work
for Veteran Support Organizations like Base Camp 40 – Warriors in the
Wild, Lone Survivor Foundation, and the Chris Kyle Frog Foundation. For
the last few years the band has been building a new era in their career.
Defined as modern southern rock the band released American Son in
late 2017 and was named Rolling Stone Country Artist to Watch. Brown
was featured as a finalist on USA Network’s “Real Country” in 2018 and
was awarded Male Vocalist of the Year at the 3rd Annual Rocky Mountain
Country Music Awards presented by iHeartRadio. The band has continued a
rigorous touring schedule while writing with some of the biggest
songwriters in Nashville and recording new music set to release in 2019.
For more information, please visit scooterbrownband.com.