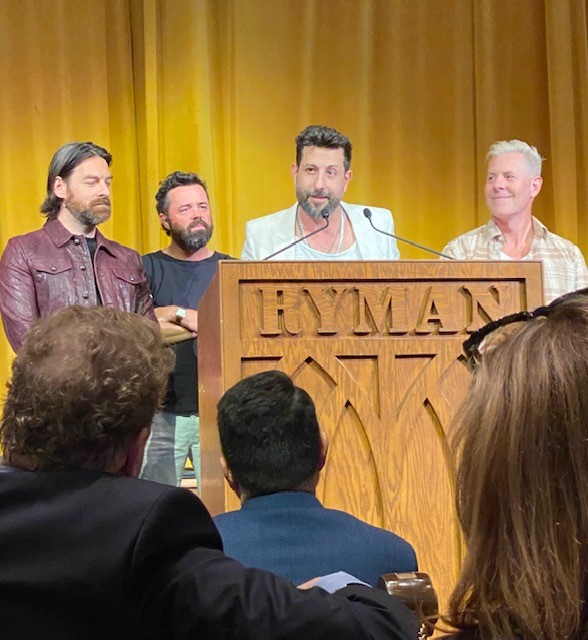 The Ryman Auditorium in Nashville is known as “the Mother Church of Country Music.” However, the Ryman has been a favored venue for acts from every genre of music including Rock & Roll. More than one hundred members of the Rock & Roll Hall of Fame have played the Ryman over the decades.  That connection has now been made official. Bonnie Raitt and members of Old Dominion were among the musicians, celebrities, politicians and members of the Nashville music industry were on hand to mark the momentous event.

Joined by Nashville Mayor John Cooper and multi-platinum-selling band Old Dominion, a historic marker was unveiled to celebrate the milestone. The Ryman joins 11 other rock & roll landmarks throughout the country including Austin City Limits and Whisky a Go Go, among others.

“It’s spiritual, and it’s one of the reasons she’s called the Mother Church. Like any good mother, she commands respect and makes you feel at home. As Music City and Country Music continue to expand around her, she remains the center of the family. She’s a beacon and a bucket list experience for us all, creators and fans alike.” – Matthew Ramsey, lead vocalist of Old Dominion

The Ryman and Rock Hall also used this opportunity to announce a multi-year partnership, which will include a new daytime tour exhibit at the Ryman scheduled to open later this year. The upcoming exhibit will feature the Rock & Roll Hall of Fame Inductees who have graced the Ryman stage over the years.

“The Ryman is one of the most storied music venues in the world. With an unmatched role in popularizing country music — one of the pillars of rock & roll — its legendary stage has hosted performances by a staggering number of Rock & Roll Hall of Fame Inductees and continues to do so today,” said Harris, “We recognize the significance of Ryman Auditorium and are thrilled to designate this iconic venue as a Rock & Roll Hall of Fame Landmark.”

On a personal note, while talking with Greg Harris (no relation!) I was able to share with him a family portrait of Don and Phil Everly, aged 9 and 11. The photo came from my great aunt who was also Don and Phil’s grandmother. Mr. Harris invited me to send a copy of the photo to him to be part of the collection at the Rock & Roll Hall of Fame.

“The Ryman has played an important role not only in the history of Nashville, but in country music and rock & roll as well,” said Rock & Roll Hall of Fame Inductee Bonnie Raitt, “This stage holds a special place in my heart as I’m able to perform live with many of the incredible Nashville songwriters in the audience whose work has enriched my life and music. I’m honored to help pay tribute to of one of America’s great rock & roll venues.”

Since the first concert held on May 4, 1892, the Ryman has welcomed an array of artists, entertainers and speakers on its hallowed stage – from magician Harry Houdini to comic actor Charlie Chaplin and former president Theodore Roosevelt to civil rights leader Martin Luther King Jr., plus music icons from all genres including Garth Brooks, Johnny Cash, Sheryl Crow, Bob Dylan, Elvis, B.B. King, Lizzo and Harry Styles.

“While the Ryman may be best known as the Mother Church of Country Music and the most famous former home of the Grand Ole Opry, the venue has always played host to a wide variety of performers, including many of the very first practitioners of what would become rock & roll music,” said Fioravanti. “We are honored to receive this high distinction from the Rock & Roll Hall of Fame and be included among such iconic rock & roll landmarks.”

About Ryman Auditorium: A National Historic Landmark, Ryman Auditorium was built by Captain Thomas G. Ryman in 1892 as the Union Gospel Tabernacle. The historic venue is the most famous former home of the Grand Ole Opry (1943-1974). The Ryman’s thriving concert schedule hosts more than 200 shows per year For more information, visit https://ryman.com.

More about the Rock & Roll Hall of Fame at their website https://www.rockhall.com,