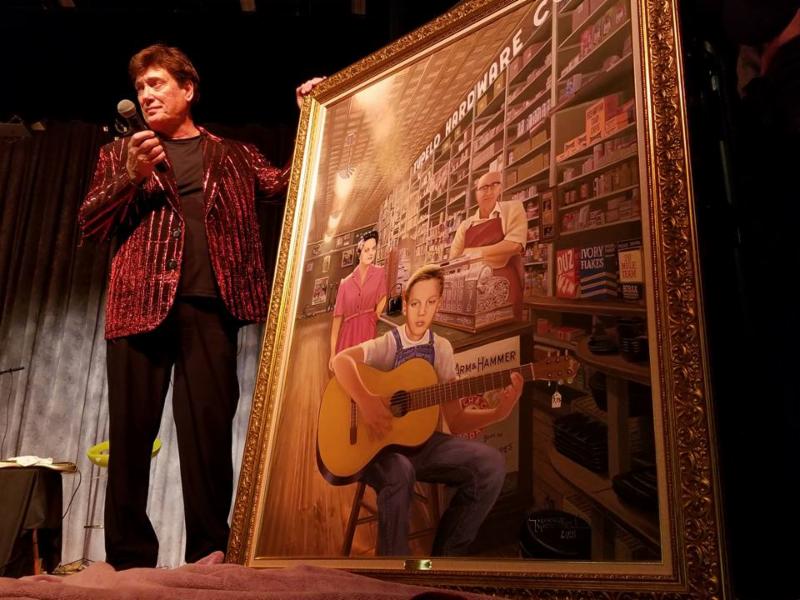 TO SOLD-OUT CROWD, RAISING OVER

NASHVILLE, TN (February 25, 2018) — Thanks
to fans, media friends and the city of Tupelo, Mississippi, Ronnie
McDowell kicked off his new television venture with a bang. The
legendary entertainer unveiled his latest original artwork, ‘That Magic
Moment,’ in front of a sold-out crowd at The Elvis Presley Birthplace on
February 17th.

“Thank y’all ever so much. What a wonderful time I had in Tupelo,” shared the star.

The
night filled with Ronnie McDowell’s biggest hit songs mixed with some
Elvis Presley favorites and fun stories was filmed for McDowell’s new
television show, Painting America. This premiere episode follows Ronnie
McDowell, son Tyler Dean and their buddy Jim Calloway on a road trip
from Nashville to Tupelo as they meet with locals who share the story of
Elvis getting his first guitar at the town’s hardware store. The
journey leads the group to Memphis where they find Elvis’s actual first
guitar. Concluding with the concert and painting unveil, the show will
be a must-see.

Elvis Presley Fan Club members
recognized Ronnie McDowell’s talents and generosity at the closing of
the event with his own paver at the foot of the Elvis Presley Statue in
Tupelo at FairPark.

McDowell
has also made a print of the original artwork, ‘That Magic Moment,’
available along with his other paintings and new music.

About Ronnie McDowell: Ronnie McDowell entertains audiences worldwide with his own blend of romantic intimacy and country excitement! Ronnie
McDowell charted a string of hit singles between 1979 and 1986…
“Older Women”… “You’re Gonna Ruin My Bad Reputation”… “Watchin Girls
Go By” …and “In A New York Minute.” The Vietnam Veteran’s admiration
for Elvis led to McDowell singing 36 songs on the soundtrack “Elvis,”
the Dick Clark-produced television movie that featured Kurt Russell as
the performer. He also was the singing voice for the television movie
“Elvis And Me”, the ABC television series about the early years of
Elvis’ career titled simply “Elvis” as well as, the 1997 Showtime
special “Elvis Meets Nixon.” McDowell is a true artist and his
creativity has expanded to original paintings for Walt Disney along with
painting of some of pop culture’s biggest celebrities from Elvis to
Dolly Parton to Clark Gable.